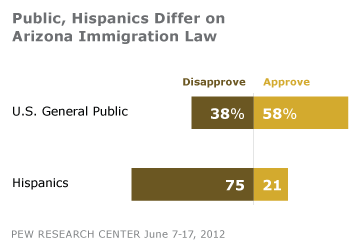 The American public has consistently expressed support for the provision of Arizona’s immigration law upheld by the U.S. Supreme Court that requires police to verify the legal status of someone they have already stopped or arrested if they suspect the person is in the country illegally. Still, a plurality of Americans say they want an approach to illegal immigration that balances both tougher enforcement and creating a path to citizenship for the more than 11 million immigrants who are in the country illegally.

By contrast, Hispanics have consistently disapproved of the so-called “show me your papers” provision of Arizona’s immigration law, and have consistently shown strong support for prioritizing a path to citizenship for unauthorized immigrants over tighter border controls.

In a mid-June survey by the Pew Research Center for the People & the Press, 58% of American adults say they approve of the 2010 Arizona law, while 38% say they disapprove. When asked about priorities for addressing illegal immigration, a plurality (42%) of American adults give equal priority to tighter restrictions and creating a path to citizenship. Meanwhile, about a quarter (28%) say tougher border security and stricter law enforcement alone should be the priority; about the same percentage (27%) say developing a way for unauthorized immigrants to become citizens alone should be the priority. These views have changed little since 2010.

Among Hispanics, a 2010 Pew Hispanic Center survey found that more than three-quarters (77%) said enforcement of the nation’s immigration laws should be left to the federal authorities while just 15% said local police should take an active role.

Meanwhile, deportations of illegal immigrants have reached record levels during Barack Obama’s presidency, rising to an annual average of nearly 400,000 since 2009, higher than the annual average during George W. Bush’s presidency. Most Hispanics oppose the way Obama has handled the deportations, according to a 2011 Pew Hispanic Center survey. That survey showed 59% of Hispanics disapprove of the way the Obama administration is handling the issue of deportations, while 27% approve.