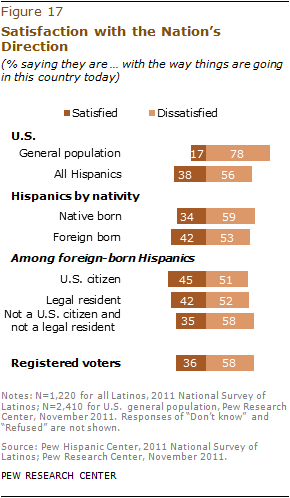 When it comes to the direction of the country today, more than half (56%) of Latinos say they are dissatisfied with the way things are going while 38% say they are satisfied, according to the new Pew Hispanic survey.

Even though a majority of Latinos are dissatisfied, they are notably less downbeat than the rest of the public. Among all American adults, more than three-in-four (78%) say they are dissatisfied with the nation’s direction (Pew Research Center, 2011).

The level of dissatisfaction among Latinos is unchanged from 2010. Then, a similar share 59% said they were dissatisfied with the nation’s direction (Lopez, 2010).

Among Hispanics, there are few differences by nativity. Six-in-ten (59%) native-born Hispanics say they are dissatisfied with the nation’s direction, as do 53% of the foreign born. Also, Hispanic registered voters (58%) are about as dissatisfied as are all Hispanics.

Next: VI. Latinos and the 2012 Presidential Election
← Prev Page
Page1Page2Page3Page4You are reading page5Page6Page7Page8Page9
Next Page →