In 2010, almost two-thirds (65%) of Hispanics were online, a rate comparable to that of blacks (66%) and significantly lower than the rate for whites (77%). The difference in internet use between Hispanics and whites is driven in part by the fact that Hispanics tend to have less education and lower incomes than whites. When education or income are controlled for, the ethnic differences in internet use disappear.

Educational attainment is correlated with internet use. While just over four-in-ten (42%) Hispanics lacking a high school diploma are online, this share reaches 68% for Hispanics who are high school graduates. And for Hispanics with at least some college education, the share more than doubles, with 91% reporting that they go online.

Household income is also strongly associated with internet use.3 Some 57% of Latinos living in households with incomes under $30,000 a year use the internet. In comparison, almost eight-in-ten (79%) Latinos in households earning $30,000 to $49,999 annually are online. More than nine-in-ten (91%) Latinos in households with incomes of $50,000 or more are online. In contrast, place of residence is not linked to differences in internet use for Latinos. About two-thirds (65%) of Latino city dwellers are online, compared with 71% of suburban Latinos and 60% of those in rural areas. 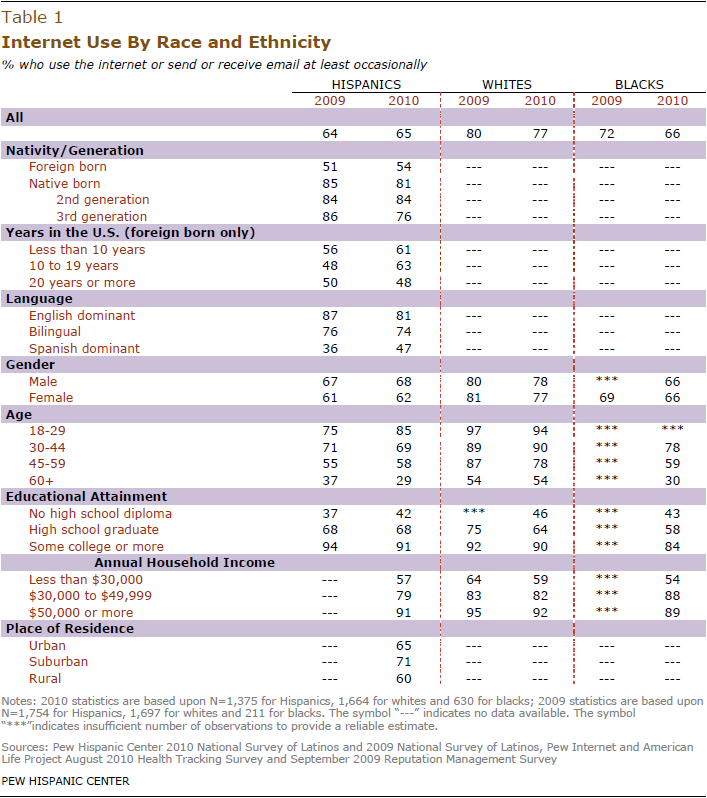 Next: III. Home Internet Use
← Prev Page
Page1You are reading page2Page3Page4Page5Page6Page7Page8
Next Page →