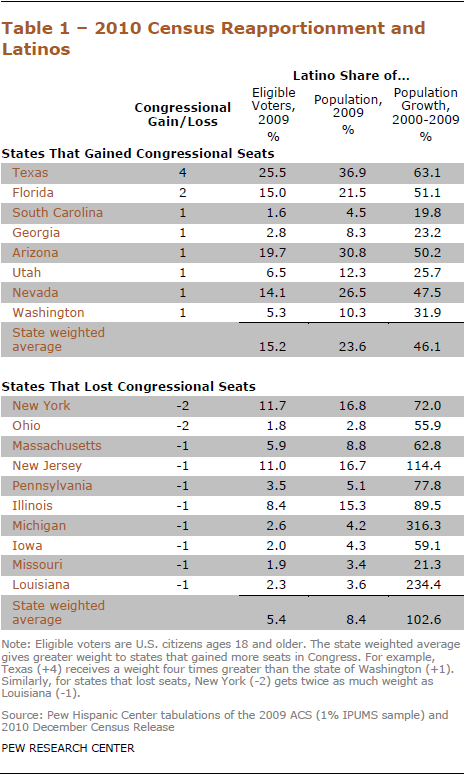 With these reapportionment changes, Latinos likely will play a larger role in national politics in the coming decade. Two states that gained seats, Florida and Nevada, have been key swing battlegrounds in recent presidential elections (having voted for the Republican nominee in 2004 and the Democrat in 2008). In both states, Latinos are a growing share of eligible voters.

According to the Census Bureau, there were 308 million people residing in the U.S. in 2010, up 9% from 2000 (Census Bureau, 2010). Overall, based on 2009 population estimates, Hispanics accounted for more than half (51%) of that growth.2 However, because many Latinos are either too young to vote or are not U.S. citizens, not all of their population growth translates into immediate electoral strength. Among the nation’s 48.4 million Hispanics in 2009, a record 20.1 million are eligible to vote. Yet an even greater number are not eligible to vote. Some 15.5 million3 Hispanics are U.S. citizens 17 years of age or younger and 12.8 million of all ages are not U.S. citizens.4

Even so, the number of the Latinos eligible to vote continues to grow. Since 2000, nearly 6 million more Latinos have become eligible to vote. The bulk of this growth was attributable to the 5 million U.S. born Latino youths nationwide who turned 18 during this past decade. That translates into an additional half-million U.S. born Latinos coming of age each year—a pattern that is certain to persist, and grow, in the coming decades.

No matter what happens with immigration patterns in the future, the aging of the U.S. born Latino youth bulge ensures that the electoral strength of the nation’s largest minority group will continue to grow in the coming decades. And much of that growth will take place in states that have gained congressional seats and Electoral College votes.

Next: II. Reapportionment Gains and Hispanic Population Growth
← Prev Page
You are reading page1Page2Page3Page4
Next Page →