The relatively poor education of Hispanic immigrants reflects the fact that most Hispanic immigrants are educated not in the U.S. but in less developed countries. Hispanic immigrants who arrived in the U.S. early in childhood and thus were enrolled in U.S. elementary and secondary schools are much better educated. Of those who arrived under the age of 10, only about one-quarter were high school dropouts in 2008, and their education approximates that of native-born Hispanic adults (Table 5). Most immigrant Hispanic adults arrived in the United States after age 14 (80%), and a majority of them were high school dropouts. 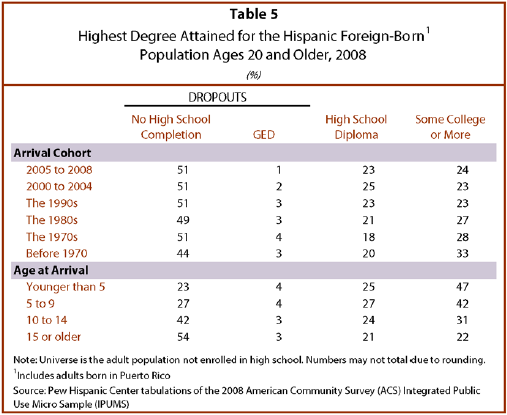 Next: Appendix A: Data Quality
← Prev Page
Page1Page2Page3Page4Page5You are reading page6Page7Page8
Next Page →