Large majorities of Hispanics, whether young or old, native born or foreign born, are satisfied with their lives. They are also optimistic about their futures. A majority of young Latinos say they expect to be better off financially than their parents, and a majority of older Latinos say they expect their children will be better off than they are. 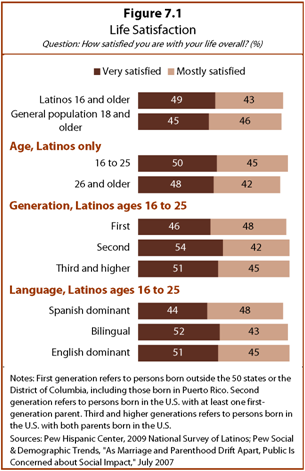 In their overall satisfaction with life, Hispanics look very much like the U.S. population as a whole. More than nine-in-ten (91%) Hispanics say they are very or mostly satisfied with their lives overall, while 91% of the general public says the same (Taylor, Funk and Clark, 2007). Life satisfaction is high among all groups of Hispanics—young as well as old. 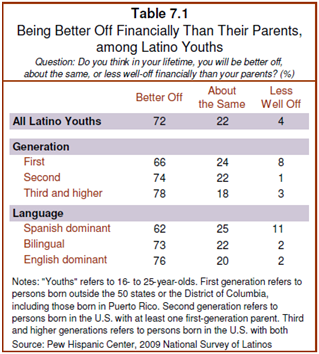 The belief in a better future for the next generation is also widespread among older Hispanics, 75% of whom expect their children to be better off financially than themselves. 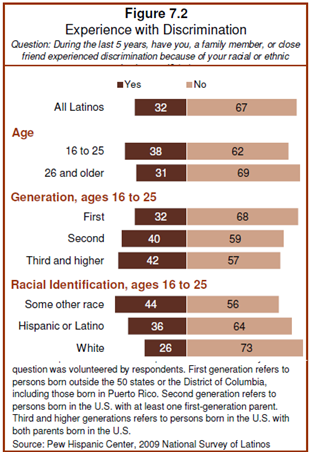 Notwithstanding their satisfaction with life and optimism about the future, a sizable minority of Hispanics say that they or someone they know has been the target of racial or ethnic discrimination. Nearly four-in-ten (38%) young Hispanics and 31% of older Hispanics say this has happened to them, a family member or a close friend in the past five years. 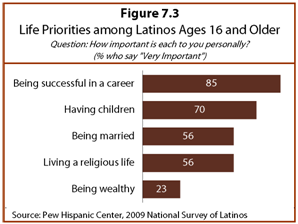 A 2008 Pew Research survey (Taylor et al., 2008) that presented this same battery of questions to the full U.S. population (18 and older) found much smaller gaps between the importance of career success (61% very important), having children (61%), being married (53%) and being religious (52%). In short, while Latinos ascribe more value to each of these priorities than does the U.S. population as a whole, they also are more disposed than the population as a whole to place career success on a higher pedestal than their other life priorities.

Some of this difference is attributable to the fact that Latinos ages 16 and older are much younger than the U.S. adult population—and career success tends to be a very high priority among younger adults. In fact, when one compares the 2009 responses of young Latinos ages 16 to 25 with the 2008 responses of all young adults ages 18 to 25, the rankings tend to converge. Being successful in a career is by far the top priority for both groups. Nearly nine-in-ten (89%) young Latinos say it is very important, as do eight-in-ten (80%) young adults in the full population. 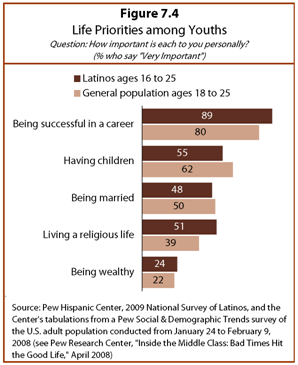 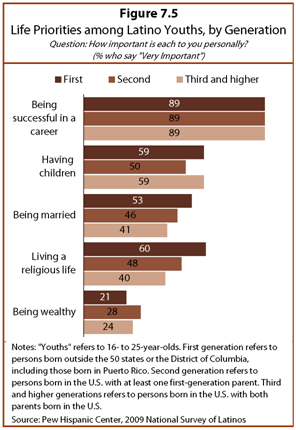 The Rewards of Hard Work 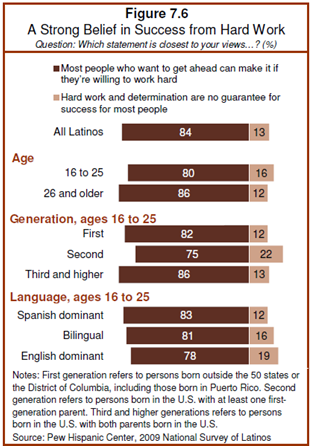 When asked which of two statements comes closer to their views about the rewards of hard work—that one can get ahead by working hard or that hard work and determination are no guarantee for success—Latinos are more likely than the general U.S. population to say that one can get ahead by working hard. More than eight-in-ten (84%) Latinos ages 16 and older say this, while just 64% of all adults (ages 18 and older) said the same in a 2006 survey (Kohut, Keeter, Doherty, Suro and Escobar, 2006).

Opinions about working hard to get ahead are similar across all groups of Latinos. Eight-in-ten young Latinos ages 16 to 25 and 86% of Latinos ages 26 and older say most people can get ahead if they work hard. Similarly, more than eight-in-ten (82%) young Latino immigrants, 75% of those in the second generation and 86% of those in the third generation say that one can get ahead by being willing to work hard. 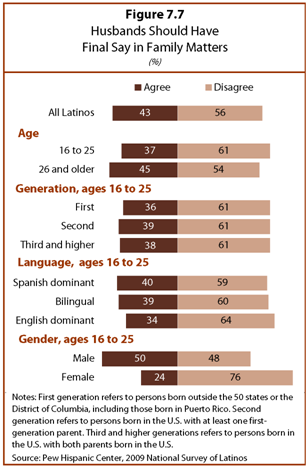 Latino cultures around the world are known for a streak of paternalism. But a question in the 2009 National Survey of Latinos about whether the husband should generally have the final say in family matters finds mixed attitudes among Latinos living in the United States. Only about four-in-ten (43%) Latinos agree with the statement, while 56% disagree.

When this same question was posed on a Pew Hispanic survey in 2002 (Pew Hispanic Center/Kaiser Family Foundation, 2002), just 36% of all respondents said that the husband should be the lead family decision-maker. 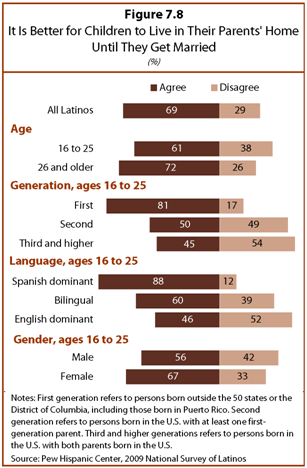 Another question designed to explore the strength of traditional family values asks whether it is better for children to live in their parents’ home until they get married. Nearly seven-in-ten (69%) Latinos say that it is, but there are significant differences on this question by age and generation. More than six-in-ten (61%) young Latinos feel this way, compared with seven-in-ten (72%) older Latinos.

“[In] Caucasian culture, you’re expected to be out of your house when…you’re done with high school. 18. And Latinos…no! We are expected to be with our parents until we get married.”
—21-year-old Hispanic male

“With us [Latinos], our grandmother lives in the house, our grandfather is there, our uncle lives with us and we can stay in the house till whenever. They [parents] don’t ever ask you to move out. [They’ll say] ‘Until you get old enough, you’re good, you help us pay some bills. You don’t have to leave.’ Its like ‘You’re living with us.’”
—25-year-old Hispanic female

The view that children should live with their parents until they marry is especially widespread among older foreign-born Hispanics. Some 72% feel this way, compared with just 54% of native-born older Hispanics.

The Importance of Relatives 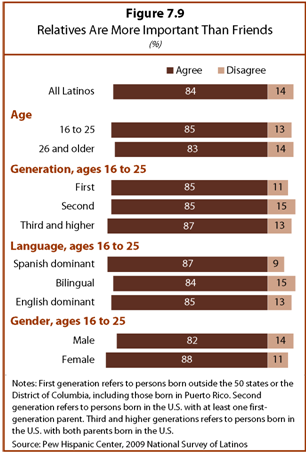 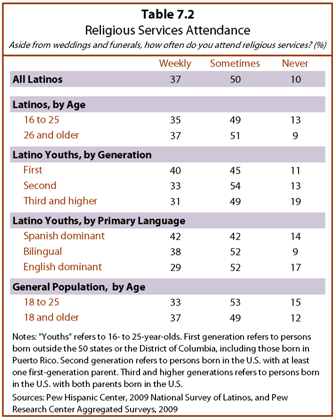 Among young Hispanics, immigrants attend church services more regularly than do the native born. Four-in-ten (40%) young immigrants say they attend church weekly, while one-third (33%) of second-generation and 31% of third-generation young Hispanics say the same. Church attendance falls off most steeply among the third generation, nearly one-in-five (19%) of whom say they never attend.

A majority (60%) of Hispanics identify as Catholic. Among young Hispanics, this figure falls to 56%, and among second- and third-generation young Latinos, just under half (49%) say they are Catholic. 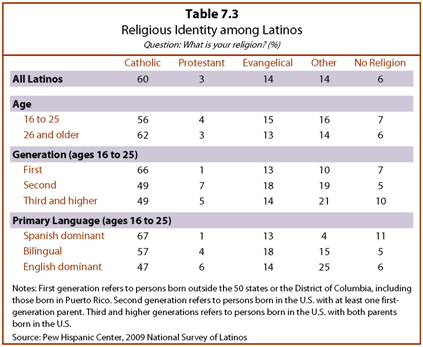 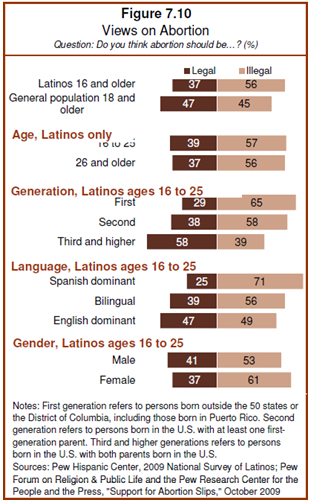 Hispanics overall hold a more conservative view than the general U.S. population about abortion rights. More than half (56%) of Hispanics ages 16 and older say abortion should be illegal in most or all cases, compared with less than half (45%) of the adult U.S. population that says the same (The Pew Forum on Religion & Public Life and The Pew Research Center for the People and the Press 2009a).25

Differences in opinion about abortion are also strongly correlated with language usage. More than seven-in-ten (71%) young Hispanics who predominantly speak Spanish say they oppose abortion. Opposition among bilingual young Hispanics is lower, but still more than half (56%) oppose it. Among those who predominantly speak English, just under half (49%) say abortion should be illegal. 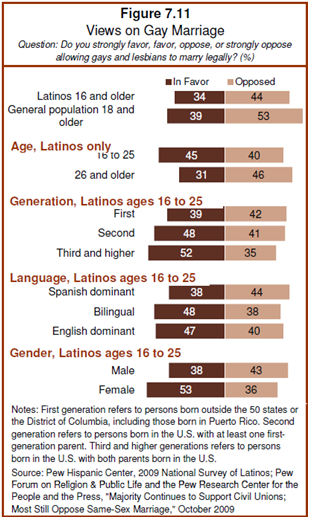 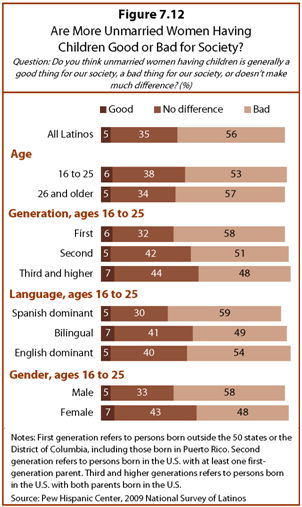 A difference in viewpoint also exists by gender. Young Hispanic females overall are less likely than young Hispanic males to say that more unmarried women having children is bad for society—48% versus 58%.