The growth in suburban education has had the effect of reducing the share of public school students enrolled in either a city school district or a town and rural district. Suburban schools educated 38% of the nation’s students in 2006-07, an increase from 35% in 1993-94. City school districts educated 31% of the nation’s students, down from 32% in 1993-94. Town/rural school districts also have lost share since 1993-94. The growth of the suburban share of enrollments reflects at least two documented trends among the wider U.S. population. First, among people living in metropolitan areas, a growing share reside in the suburbs (Frey, 2001). Second, since 1990, a growing share of the nation’s population resides in metropolitan areas (Fischer and Tienda, 2006). The latter trend is consistent with the decline in the proportion of students educated in town and rural school districts. 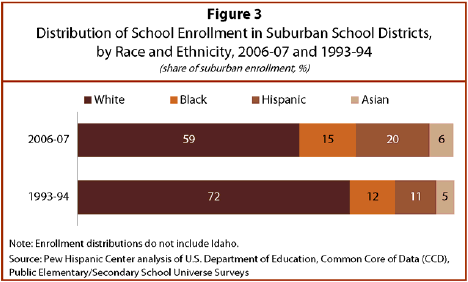 The fact that whites are a declining fraction of suburban students likely reflects more than just the larger demographic changes that have occurred in the population. As Table 2 shows, the white share of the school-age population fell by at most 11 percentage points since 1993 (from 69% to 58%).1 Among the nation’s entire public school students, enrollment of white students fell by at most 10 percentage points (from 66% to 56%). In suburbia, though, the white share of public school enrollments fell by 13 percentage points. So racial/ethnic diversification has been particularly acute in suburban school districts.