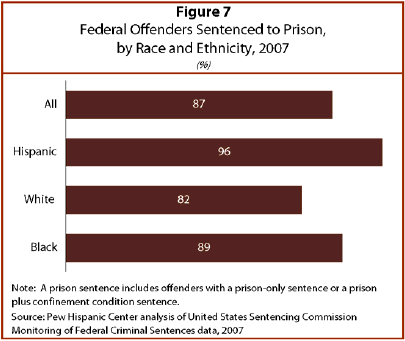 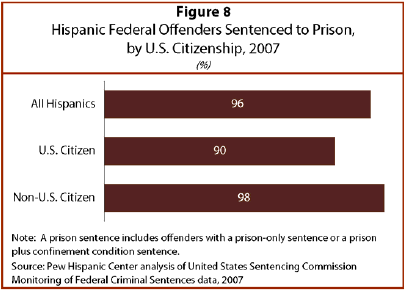 Fully 96% of immigration offenders received a prison sentence in 2007, compared with 95% of drug offenders, 94% of firearms offenders and 94% of violent offenders. Property offenders were least likely to be sentenced to prison (44%) in 2007.

Because the USSC guidelines provide clear sentencing recommendations for all offenses, disparities in the prevalence of prison sentences among racial and ethnic groups are linked to differences in the types of crimes they committed. For example, Hispanics are much more likely than whites or blacks to be sentenced for an immigration or drug offense—two of the crimes most likely to be punished with a prison sentence. In 2007, 85% of Hispanics were sentenced for either a drug or immigration offense. This was 40 percentage points greater than any other racial or ethnic group: 46% of black offenders and 37% of white offenders were sentenced for drug or immigration offenses.

Convicted offenders in federal courts typically receive one of the following five sentences. For more detail, see Appendix B. 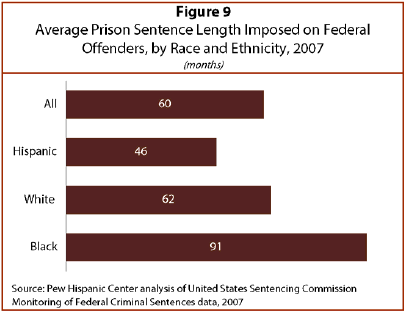 Among those who were sentenced to prison3 in 2007, the average sentence was 60 months. Black offenders on average received the longest sentences (91 months), followed by whites (62 months) and Hispanics (46 months). Among Latino offenders sentenced to prison, those who did not hold U.S. citizenship received prison sentences of 40 months in 2007. In contrast, Latino offenders with U.S. citizenship received longer prison sentences of 61 months. 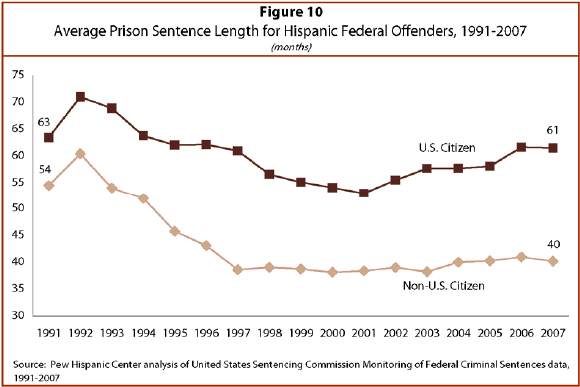 Next: Appendix A: Classification of Federal Offenses
← Prev Page
Page1Page2Page3You are reading page4Page5Page6Page7
Next Page →