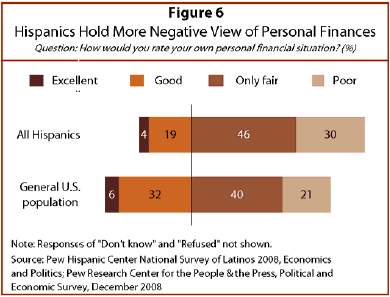 While Latinos and the general U.S. population share similar views on the current situation of the U.S. economy, Latinos hold a more negative view of their own current personal financial situation than does the general public. More than three-quarters (75%) of Hispanics say their personal finances are in poor (30%) or fair shape (46%). Among the general population, 61% report that they are in either only fair (40%) or poor (21%) shape financially.

Assessments of personal financial situations are worse among the foreign born than among the native born. More than eight-in-ten (84%) foreign-born Hispanics report that their finances are in either poor (34%) or only fair (50%) shape. Among native-born Hispanics, two-thirds (66%) say this (25% report being in poor shape and 41% say only fair shape). Among the foreign born, a shorter tenure in the United States is associated with more negative evaluations of current personal finances—90% of immigrants who arrived within the last 20 years report poor or only fair financial situations, a condition reported by 73% of respondents who have lived in the U.S. longer. 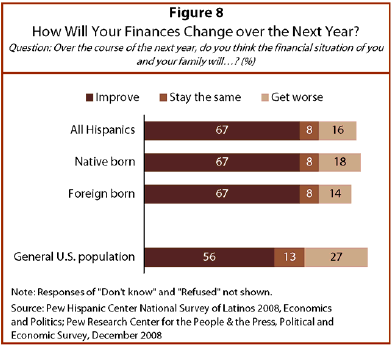 Despite (or perhaps because of) the grim state of their current personal finances, two-thirds (67%) of Hispanics expect to see improvement in the coming year, with 16% expecting a lot of improvement, and 51% expecting some improvement. Just 8% of Hispanics expect their situation to remain unchanged, and 16% expect more financial declines. In comparison, some 56% of the general public expects their financial situation to improve a lot or a little over the coming months, and 27% expect a decline in the financial circumstances of their families.

Hispanics’ outlook is not related to the present evaluation of their finances. Rather, the likelihood of optimism about the future is just as high for those who perceive their present situation as excellent or good (65%) as it is for those who consider their present financial situation to be fair or poor (68%).