More than one-fourth of Hispanic adults in the United States lack a usual health care provider, and a similar proportion report obtaining no health care information from medical personnel in the past year. At the same time, more than eight in 10 report receiving health information from alternative sources, such as television and radio, according to a Pew Hispanic Center (PHC) survey of Latino adults, conducted in conjunction with the RobertWood Johnson Foundation (RWJF). 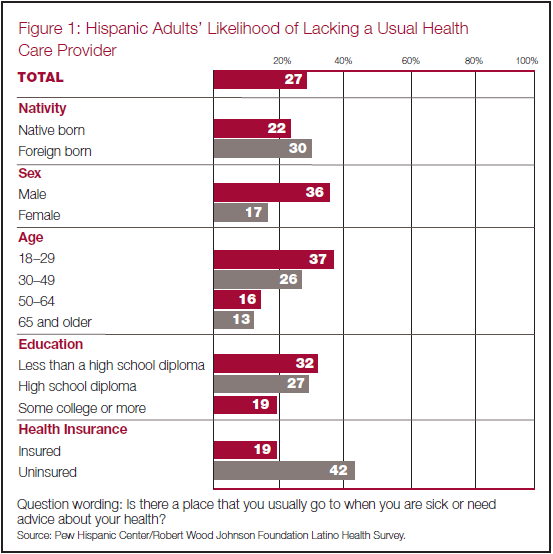 Hispanics are the nation’s largest and fastest growing minority group. They currently make up about 15 percent of the U.S. population, and this figure is projected to nearly double to 29 percent by 2050, if current demographic trends continue.1 Even after adjusting for their relative youth, Hispanic adults have a lower prevalence of many chronic health conditions than the U.S. adult population as a whole. However, they have a higher prevalence of diabetes than do non-Hispanic white adults, and they are also more likely to be overweight. This greater propensity to be overweight puts them at an increased risk to develop diabetes and other serious health conditions.2

Previous research by the U.S. Centers for Disease Control and Prevention has shown that Hispanics are twice as likely as non-Hispanic blacks and three times as likely as non-Hispanic whites to lack a regular health care provider.3 Hispanics are a diverse community, and the Pew Hispanic Center/Robert Wood Johnson Foundation Latino Health survey of 4,013 Hispanic adults explores not only their access to health care, but also their sources of health information and their knowledge about a key disease (diabetes) at greater depth and breadth than any national survey done to date by other research organizations or the federal government. It finds that among Hispanic adults, the groups least likely to have a usual health care provider are men, the young, the less educated, and those with no health insurance. A similar demographic pattern applies to the non-Hispanic adult population. The new survey also finds that foreign-born and less-assimilated Latinos—those who mainly speak Spanish, who lack U.S. citizenship, or who have been in the United States for a short time—are less likely than other Latinos to report that they have a usual place to go for medical treatment or advice.

Nevertheless, a significant share of Hispanics with no usual place to go for medical care are high school graduates (50 percent), were born in the United States (30 percent) and have health insurance (45 percent). Indeed, the primary reason that survey respondents give for lacking a regular health care provider is not related to the cost of health care or assimilation. Rather, when asked about why they lack a usual provider, a plurality of respondents (41 percent) say the principal reason is that they are seldom sick.

Not only are most Latinos obtaining information from media sources, but a sizeable proportion (79 percent) say they are acting on this information. It is beyond the scope of this report to assess the accuracy and usefulness of health information obtained from non-medical sources, but the survey findings clearly demonstrate the power and potential of these alternative outlets to disseminate health information to the disparate segments of the Latino population. 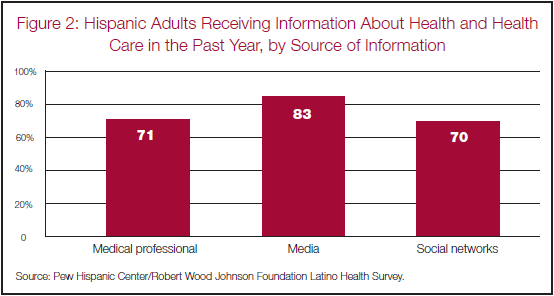 Regarding the quality of the health care they receive, Latinos are generally pleased, according to the survey. Among Latinos who have received health care in the past year, 78 percent rate that care as good or excellent. However, almost one in four who received health care in the past five years reported having received poor quality medical treatment. Those who believed that the quality of their medical care was poor attribute it to their financial limitations (31 percent), their race or ethnicity (29 percent), or the way they speak English or their accent (23 percent). The PHC/RWJF survey also asked respondents a battery of eight knowledge questions about diabetes, a condition that afflicts an estimated 9.5 percent of Latino adults, compared with 8.7 percent of non-Latino whites.4 Nearly six in 10 respondents (58 percent) answered at least six of the eight diabetes questions correctly. Better educated and more assimilated Latinos scored better, as did those with a usual health care provider.

These findings are from a bilingual telephone survey of a nationally representative sample of 4,013 Hispanic adults conducted from July 16, 2007 through September 23, 2007. The survey’s margin of error is +/- 1.83 (see Appendix A for a full description of the survey methodology). Among the key findings:

The Likelihood of Having a Usual Health Care Provider

Profile of Persons Who Lack a Usual Health Care Provider

Next: II. Hispanics and Chronic Disease in the U.S.
← Prev Page
You are reading page1Page2Page3Page4Page5
Next Page →