Changes in employment by industry reveal the full impact of the slump in construction in 2007. The industry was the principal source of job loss for both Hispanic and non-Hispanic workers. However, the impact was felt harder by Latinos because of their greater reliance on construction as a source of employment. The service sector—in particular, professional and other business services, health services, and hospitality services—was the main source of new jobs for all workers. 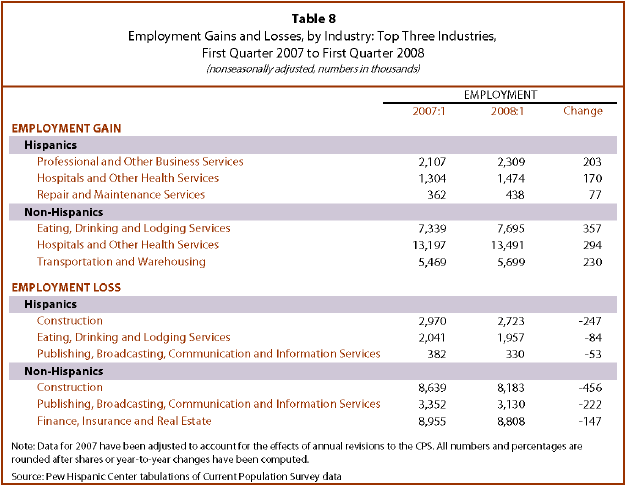 The other leading sources of job losses for Hispanics were eating, drinking and lodging services and publishing, broadcasting, communication and information services. The former is one of the major employers of Hispanics—about 2 million jobs in the first quarter of 2007. However, by the first quarter of 2008 eating, drinking and lodging services employed 84,000 fewer Latino workers.

The publishing, broadcasting, communication and information services industry does not employ many Latinos—382,000 in the first quarter of 2007—but it accounted for a loss of 53,000 jobs during 2007. This industry was also the second leading cause of lost jobs for non-Hispanics as they found 222,000 fewer opportunities in the industry in 2007. Non-Hispanics also lost 147,000 jobs in the finance, insurance and real estate industry.

In addition to the three industries noted above, Latino employment declined modestly in nondurable goods manufacturing, social services, and personal and laundry services.1

Professional and other business services, which range from management and technical services to janitorial, landscaping and waste management services, were the main source of new jobs for Latinos in 2007. They gained 203,000 jobs in that industry. Latinos also found 170,000 new jobs in hospital and other health services.2 Repair and maintenance services also added Latino workers in 2007.

The mainstay of jobs growth for non-Hispanics was the eating, drinking and lodging services industry. Notably, this industry was the second leading source of job losses for Latinos in 2007. Non-Hispanics also benefited from growth in hospital and other health services and in transportation and warehousing.

Employment losses for Hispanics in eating, drinking and lodging services were borne by immigrant workers as well. However, job losses by Latinos in publishing, broadcasting, communication and information services fell upon native-born workers (Table 9). 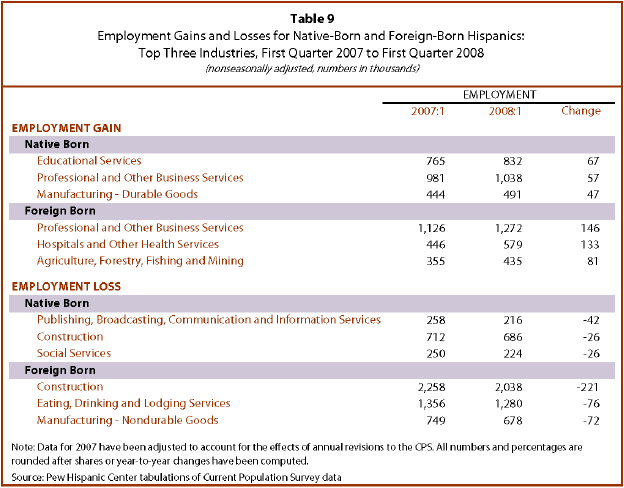 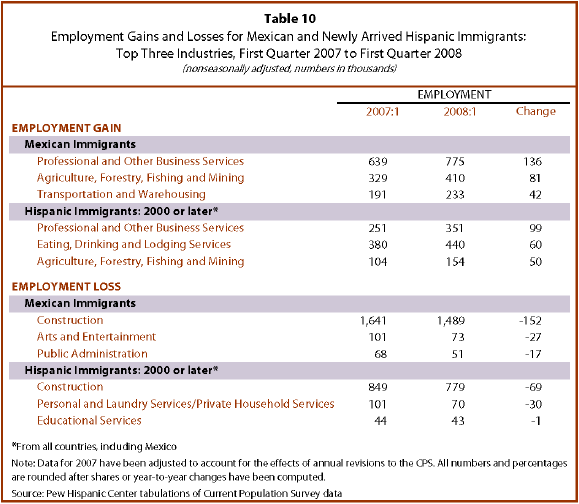 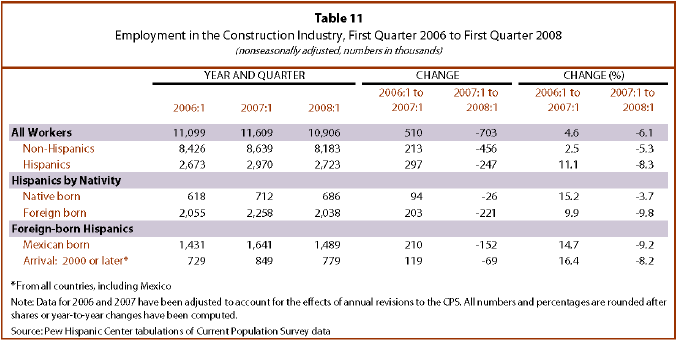