Although the construction industry, a mainstay for Hispanic men, is one the leading causes of the current economic slowdown, Latino women are not immune from the effects of the slowdown. In some respects, outcomes for Latino women appear worse than those for men. They left the labor force in greater proportion and experienced greater increases in unemployment than men. While the construction sector was not a factor in job losses for Latino women, they lost jobs in manufacturing, eating, drinking and lodging services, and social services. 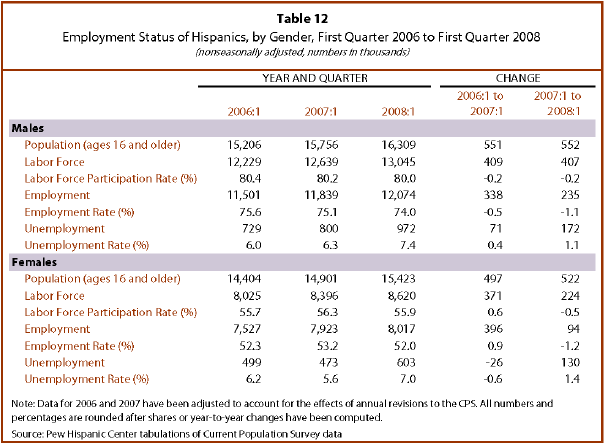 Job losses and gains by industry for Latino men and women show expected patterns. Men accounted for virtually all of the jobs lost by Hispanics in the construction industry and most of the jobs gained in professional and other business services (Table 8 and 13). The major sources of new jobs for men were industries with blue-collar job opportunities.16

On the other hand, women claimed the lion’s share of new jobs gained by Latinos in hospitals and other health services. Also, women counted a notable number of new jobs in another white-collar industry—finance, insurance and real estate. 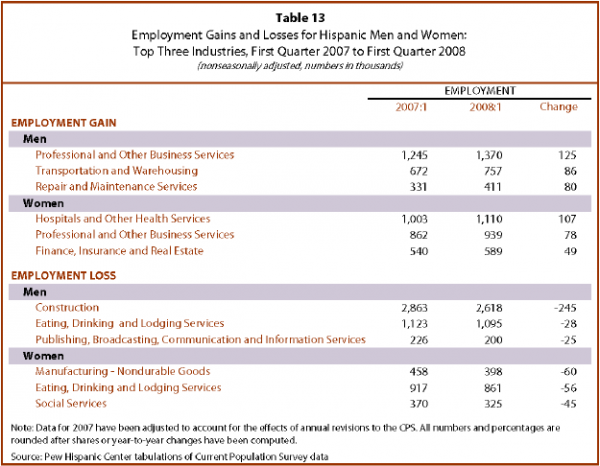 Next: VII. Jobs Lost and Gained by Industry, 2006 and 2007
← Prev Page
Page1Page2Page3Page4Page5You are reading page6Page7Page8Page9Page10
Next Page →