Employment Rate: Percent of the working-age population that is employed.

Labor Force Participation Rate: Percent of the working-age population that is employed or actively looking for work.

Unemployment Rate: Percent of the labor force that is without work and is actively looking for work.

This decade started at a high point for the U.S. labor market. The lengthy economic expansion in the 1990s drove unemployment rates to 30-year lows for Hispanics (less than 6%) as well as non-Hispanics (less than 4%). The employment rate, or the percent of the population 16 and older that was employed, also peaked. As measured by the labor force participation rate, a higher proportion of Latinos and non-Latinos were active in the labor market, either employed or seeking work, than ever before.

The 2001 recession and the economic slowdown that lasted until 2003 altered outcomes for all workers. Unemployment rates increased, and the employment rate and the labor force participation rate fell steadily. A recovery began in the middle of 2003. But the recovery would prove slow and by the end of 2006 labor market indicators were still short of the high water marks reached in 2000. Prospects for a quick return to those benchmarks were dashed by the latest slowdown in 2007.5

Unemployment Rate for Hispanics and Non-Hispanics, 2000-2008 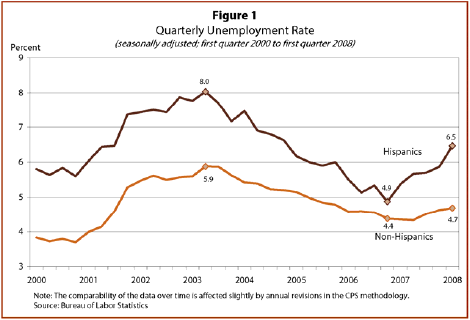 Employment Rate for Hispanics and Non-Hispanics, 2000-2008 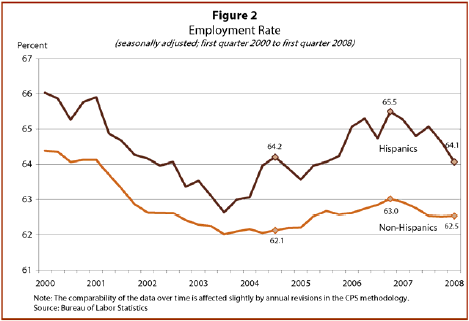 The Hispanic labor force participation rate in the first quarter of 2008 was 68.5%, on a seasonally adjusted basis. That was slightly below its latest peak of 69.0% in the third quarter of 2007 (Figure 3). Overall, labor force participation among Latinos is comparable to recent years as, with few exceptions, the rate has fluctuated between 68.0% and 69.0% since 2003. 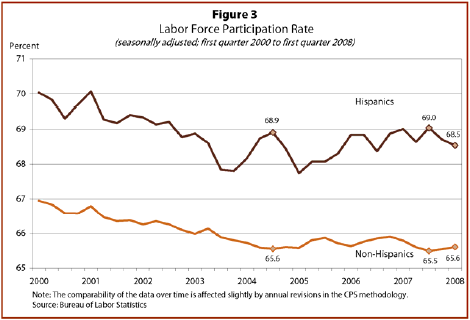 The steady course on labor force participation, for both Latinos and non-Latinos, is a clear indication that workers are not leaving the labor market despite the latest economic slowdown. It is also worth noting that the recent increases in unemployment rates, especially among Latinos, would have been lessened if workers had decided to leave the labor market. That is because workers not actively seeking employment are not counted as unemployed.