This section of the report presents a national and state level analysis designed to assess the possible importance of Hispanics in the 2008 presidential election. Toward that end, it provides the most recent available estimates of the size and composition of the Hispanic population eligible to vote. It also provides hypothetical projections of Hispanic registration and turnout in key states in 2008, based on the turnout rates observed in the last presidential election. 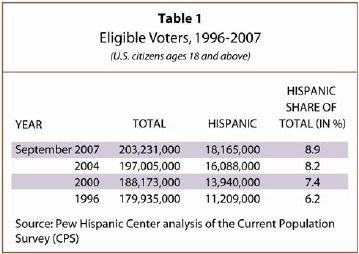 Census data indicate that 16.1 million Hispanics were eligible to vote in the November 2004 election and that 7.6 million Hispanics reported voting in that election (Suro, Fry and Passel, 2005), for a Hispanic turnout rate of 47% (compared with a turnout rate of 63.8% for the full population). Because the number of Hispanics eligible to vote has since risen to an estimated 18.2 million, the number of Latinos registering to vote and actually voting in the 2008 election can be expected to increase above the November 2004 levels. How many of the estimated 18.2 million Hispanics eligible to vote will actually register and turn out to vote? Registration and turnout depend on myriad factors, among them interest in the issues and candidates, mobilization and get-out-the-vote efforts, and Election Day weather. Many of these factors are election-specific and hence it is not possible to predict with any certainty the number of Latino registrants and voters in 2008. With that caveat in mind, however, one can project the potential size of Latino registrants and voters based upon past registration and voting patterns.

Table 4 projects the number of Hispanics registering to vote and voting in 2008 on the basis of Hispanic registration and voting rates in the last presidential election. By breaking down the estimated 18.2 million Latinos eligible to vote by age and generation, the projection accounts for the change in the age and generation composition of the Hispanic electorate that has occurred since November 2004.

Based on 2004 behavior, a projected 10.6 million Hispanics would register to vote, up from the 9.3 million registered to vote in November 2004. Hispanic voters would increase to 8.6 million, compared with the estimated 7.6 million Hispanics who reported voting in 2004. The projected growth in Hispanic registrants and voters (about 14%) outstrips the growth in the Hispanic population eligible to vote (about 13%) because the composition of the Hispanic electorate has shifted toward age groups and generations that had higher registration and voting rates in 2004. 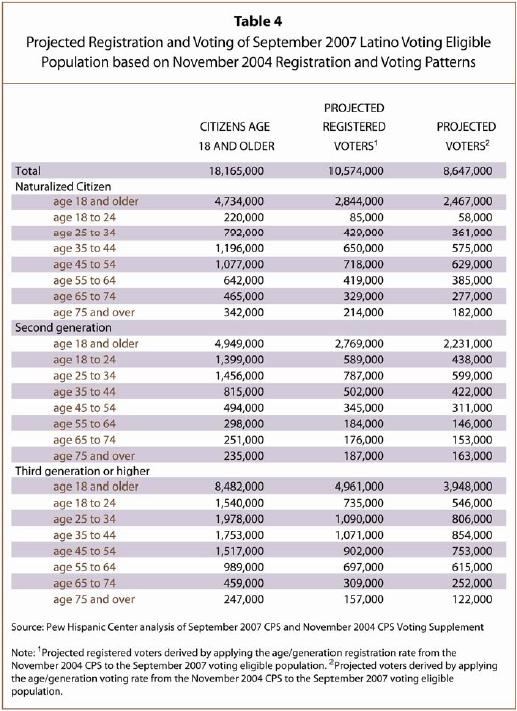 The Importance of the Hispanic Vote at the State Level

The 18.2 million estimate of the size of the Latino voting eligible population nationwide is based on the Census Bureau’s September 2007 Current Population Survey. The September 2007 CPS had about 152,000 respondents nationally, and the monthly CPS can not provide reliable estimates of the Latino electorate at the state level.3 For many states, an insufficient number of respondents in a monthly CPS precludes the tabulation of detailed state statistics.

Table 5 presents 2006 estimates of the size of the Hispanic voting eligible population for the 50 states and the District of Columbia. These estimates are derived from the Census Bureau’s 2006 American Community Survey. The ACS is designed to provide annual estimates of population characteristics at the state level and for geographic areas with at least 65,000 residents.

Table 6 reports the Republican margin of victory in each state in the 2004 election—that is, the difference between all ballots cast for President Bush and Democratic challenger John Kerry (expressed as a percentage of the total ballots cast)—and compares it with the Hispanic share of eligible voters in that state and also with the projected Hispanic share of voters who will hypothetically turn out to vote in that state in 2008. It also shows the percentage of Hispanics who voted for Bush in 2004 (in states where there was a big enough Latino vote in 2004 to permit such estimates from national election day exit polling).

As Table 6 shows, there are only seven states where the estimated Hispanic share of the state electorate exceeds the 2004 Republican margin of victory: New Mexico, Texas, Arizona, Florida, Colorado, Nevada, and Iowa. However, Hispanic turnout rates nationwide have historically been lower than non-Hispanic turnout rates. For example, in the 2004 election it is estimated that nationally Hispanics accounted for 8.2% of eligible voters but only 6.0% of all votes cast (Suro, Fry and Passel, 2005). There are no reliable estimates of the 2004 Hispanic turnout rates in individual states, however. In the absence of such data, Table 6 assumes that voters in a given state turn out to vote at the same rates that voters turned out nationally in the 2004 election. That is, the projected Hispanic share of a state’s voters in column 3 is derived by applying a uniform 47% voting rate for Hispanics and an overall voting rate of 63.8% for the full population of eligible voters.

In six states — New Mexico, Florida, Colorado, Nevada, Arizona and Iowa — the projected Hispanic share of voters who go to the polls, as shown in column 3, exceeds the 2004 Republican margin of victory. In 2004, President Bush received at least 30% of the Hispanic vote in each of these states, according to the 2004 state exit polls (as shown in column 5). Past Hispanic presidential preferences provide some guidance as to how much Hispanic voter party preferences could hypothetically change in 2008. The recent high-water mark of Latino support for a Republican candidate was 40% in 2004 when George Bush defeated John Kerry (Suro, Fry and Passel, 2005). The recent low point of Hispanic support for a Republican nominee was 21% in 1996 when Bill Clinton defeated Bob Dole and Ross Perot (Leal, Barreto, Lee, and de la Garza, 2005). And in the Congressional elections of 2006, GOP candidates received an estimated 30% of the Latino vote nationwide, according to exit polls.

On the other side of the partisan ledger, there are three states—California, New Jersey and Wisconsin—where the projected 2008 Hispanic share of the state vote exceeds the 2004 Democratic margin of victory.

Note on the Appendixes

Appendix A consists of two tables presenting 2006 estimates of the size of the total population and the voting eligible population. Appendix Table 1 presents state level estimates. Appendix Table 2 presents estimates for the 435 congressional districts. Estimates are provided for Hispanics and all persons. Tabulations of the Hispanic share of the voting eligible population are shown. These estimates are obtained from the Census Bureau’s 2006 American Community Survey. The ACS surveys about 3 million households per year and is designed to provide annual estimates for places whose population exceeds 65,000.

Next: Appendix A: Hispanic Population Eligible to Vote
← Prev Page
Page1Page2You are reading page3Page4
Next Page →