As Congress considers the reauthorization of the No Child Left Behind (NCLB) law an analysis of recent data from standardized testing around the country shows that the fast growing number of students designated as English language learners are among those farthest behind.

The results of national testing conducted in 2005 shows that nearly half (46%) of 4th grade students in the English language learner (ELL) category scored “below basic” in mathematics in 2005—the lowest level possible. Nearly three quarters (73%) scored below basic in reading. In middle school achievement in mathematics was lower still, with more than two-thirds (71%) of 8th grade ELL students scoring below basic. Meanwhile, the same share (71%) of 8th grade ELL students scored below basic in reading.

The NCLB legislation is due for congressional reauthorization in 2007. In its current form the law requires that all students be proficient in math and reading by 2014 according to standards and testing programs developed individually by each state. Specific categories of students, including ELL students, must meet proficiency standards as a group. To produce a measure of how much achievement among ELL students might have to be improved in order to meet federal mandates, this report compares their scores to those of white, black and Hispanic students.1 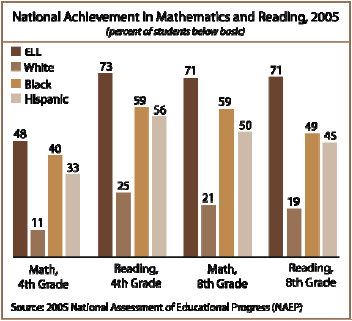 These findings are based on the 2005 National Assessment of Educational Progress (NAEP), also known as the “Nation’s Report Card,” which is the most authoritative source of standardized testing data for public school students across the country. The NAEP also allows for comparisons among many states because the testing program is the same nationwide. The NCLB law does not require proficiency measures based on NAEP scores. Nonetheless, this analysis offers the best available assessment of current achievement by ELL students as the effort to ensure that all students meet proficiency standards enters a critical phase.

Moreover, this report also examines data from individual testing programs administered in many states that are the basis for meeting the federal mandates, and this data confirms the basic findings from the NAEP on the status of ELL students.

The achievement analysis is based on the 2005 National Assessment of Educational Progress, also known as the “Nation’s Report Card,” and 35 state-administered assessments mandated by the No Child Left Behind law. The report also uses demographic data, for the nation and for some states, to analyze some of the characteristics of limited English speaking students.

Next: II. Introduction
← Prev Page
You are reading page1Page2Page3Page4Page5
Next Page →