The differences in the basic demographic trends for Hispanic and white students are most evident in primary schools, as are the differences in the distribution of students in existing and new schools. The changes evident in primary schools are particularly important because they portend the future of the nation’s public schools. As today’s primary school students grow older, the changes in their demographic makeup will be seen first in middle schools and then in high schools.

High rates of immigration in the 1980s and 1990s produced an influx of young Hispanic adults in their prime childbearing years, and those immigrants proved to be highly fertile (Durand, Telles and Flashman, 2006). As a result, Hispanic enrollment in the nation’s public primary schools increased from 3 million to 4.6 million—a jump of 53%—from 1993-94 to 2002-03. Meanwhile, as the baby boom generation passed its prime childbearing years, the number of white children entering primary school was declining. White primary school enrollment over that period dropped by 1.2 million, a decrease of 9%. The change in black enrollment in primary schools was more modest, increasing by 11%, or 392,000 students. Had it not been for the increase in Hispanic enrollment, the total number of students in primary schools would have declined by 560,000, or 3%.

The growth in primary school enrollment, which was driven entirely by Hispanic students, was accompanied by an increase in the number of schools. A total of 6,500 primary schools enrolling about 2 million students were added between the 1993-94 and 2002-03 school years. During that time, the number of pupils attending existing schools declined by nearly 1 million. But the distribution of students among new and existing schools did not follow the underlying demographic pattern. Instead, there was a substantial shift of white students from existing schools to new ones.

In contrast, most of the 392,000 additional black students in primary schools attended new schools: 331,000, versus 61,000 enrolled at existing schools. 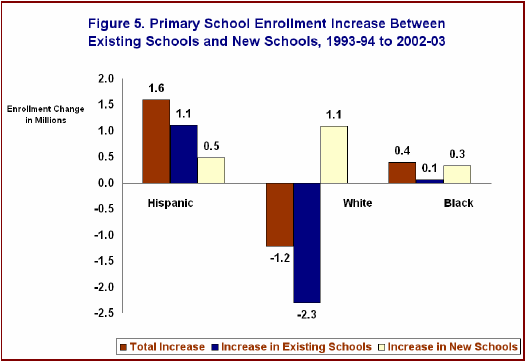