The growth in wages reflected the trends in employment growth. Hispanics and blacks, who experienced relatively large drops in their rates of unemployment, also witnessed higher wage growth. For non-Hispanic whites and Asians, who have much higher median incomes compared to Latinos and blacks, wages showed little or no movement from the previous year.

Among Hispanics, the wage picture varied by nativity. While overall Latino wages went up between 2005 and 2006, after two years of decline, the gain nevertheless masked a significant loss. Foreign-born Hispanics—the biggest part of the Latino labor pool and the ones who have benefited the most in terms of employment—actually experienced a decline in the median wage.

Latinos also earn less than any other racial or ethnic group. The unemployment gap between Hispanic workers and non-Hispanic whites may be tightening, but the wage gap remains.

At the other end of the earnings scale were Asians, both foreign and native born, who have the highest median wage among all workers.

The improvement in wages for Latinos and blacks in 2005-06 appears to have narrowed the earnings gap between low-income and high-income workers. The modest improvement notwithstanding, the gap was still higher than it was before the recession and remains high in absolute terms. 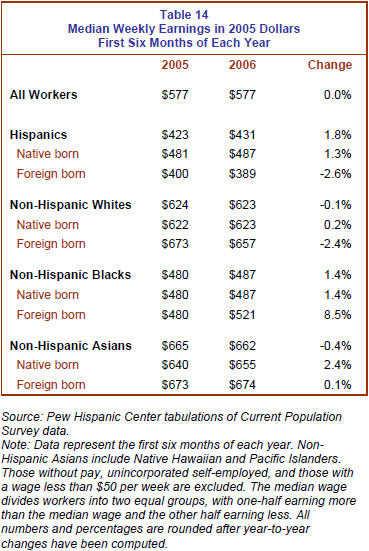 The foreign-born population for both non-Hispanic whites and blacks is small. Therefore, the overall wage trends for these racial and ethnic groups mirror the experiences of native-born workers.

Described another way, high-income workers in 2004 earned 6.9 times as much as low-income workers. By 2006, they were earning 6.6 times as much. The earnings gap is still high in absolute terms and it remains higher than it was before the recession. 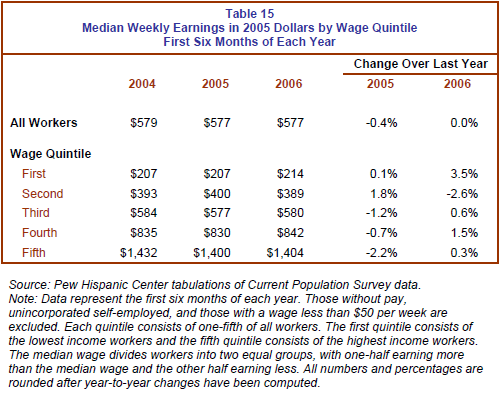 Next: Appendix A: Figures A1-A3
← Prev Page
Page1Page2Page3Page4Page5Page6Page7You are reading page8Page9Page10
Next Page →