The Asian workforce, even more so than that of Hispanics, is defined by foreign-born workers. The foreign-born Asian population 16 and older outnumbered its native counterpart by nearly three to one in the second quarter of 2006—7.7 million compared with 2.7 million (Table 8). Thus, three-fourths of the Asian working-age population is foreign born.

Also in contrast with economic outcomes for most other groups, the labor force participation rate for native-born Asians decreased by 0.8 percentage points and the employment rate fell by one percentage point. For foreign-born Asians, the labor force participation rate increased from 67% to 68% and the employment rate went up from 64.4% to 65.9%.

Immigrants are not a significant presence within the non-Hispanic white or the black populations of working age. Both non-Hispanic whites and blacks in general benefited from the improved economy. While the employment outcomes for the foreign-born workforces of each group differed, the overall trend for both was defined by how the much larger share of native-born workers fared (Table 9). 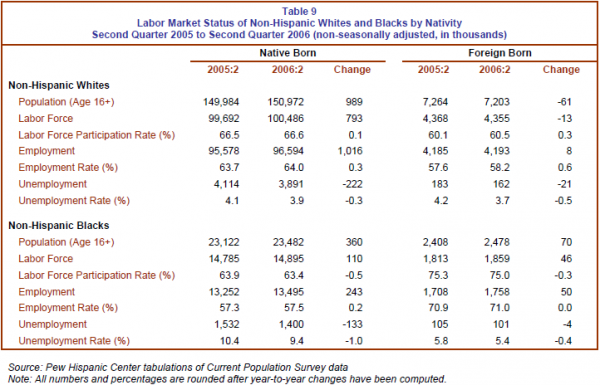 The unemployment rate for native-born black workers decreased from 10.4% to 9.4%. However, part of the decline may reflect a drop in the labor force participation rate among blacks (63.9% to 63.4%) because fewer workers seeking work means fewer register as being unemployed. Among foreign-born black workers, the unemployment rate fell from 5.8% to 5.4%, and the labor force participation rate decreased from 75.3% to 75%.

Next: VI. Employment by Industry
← Prev Page
Page1Page2Page3Page4You are reading page5Page6Page7Page8Page9Page10
Next Page →