Nearly half of all the unauthorized migrants now living in the United States entered the country legally through a port of entry such as an airport or a border crossing point where they were subject to inspection by immigration officials, according to new estimates from the Pew Hispanic Center.

As much as 45% of the total unauthorized migrant population entered the country with visas that allowed them to visit or reside in the U.S. for a limited amount of time. Known as “overstayers,” these migrants became part of the unauthorized population when they remained in the country after their visas had expired.

Another smaller share of the unauthorized migrant population entered the country legally from Mexico using a Border Crossing Card, a document that allows short visits limited to the border region, and then violated the terms of admission.

The rest of the unauthorized migrant population, somewhat more than half, entered the country illegally. Some evaded customs and immigration inspectors at ports of entry by hiding in vehicles such as cargo trucks. Others trekked through the Arizona desert, waded across the Rio Grande or otherwise eluded the U.S. Border Patrol which has jurisdiction over all the land areas away from the ports of entry on the borders with Mexico and Canada.

The Pew Hispanic Center has previously estimated that there are between 11.5 and 12 million unauthorized migrants in 2006.1 The calculations reported in this fact sheet suggest that roughly 4.5 to 6 million or 40 to 50% of the total entered the country legally through ports of entry. Of them, some 4 to 5.5 million entered with nonimmigrant visas, mostly as tourists or business visitors, and another 250,000 to 500,000 entered with Border Crossing Cards. 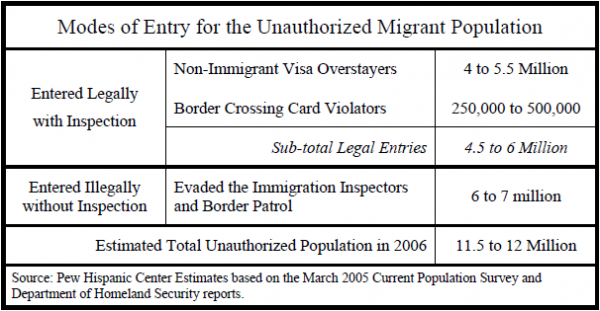 A vast human traffic passes through U.S. ports of entry every year. For 2004 the Department of Homeland Security (DHS) estimated that there were 179 million nonimmigrant admissions, i.e. individual entries by foreign nationals authorized for temporary stays.2 The vast majority of them—148 million—were Canadians and Mexicans who have Border Crossing Cards that allow them to go back and forth across the border frequently for short stays, including daily commutes for work. Another 30.8 million admissions involved foreign nationals with nonimmigrant visas that authorize temporary stays for pleasure, business and study. Some of those people enter more than once in a year, and DHS estimates that 25.8 million individuals actually entered the country at least once on nonimmigrant visas.

Given the magnitude of these numbers, if only a tiny share of these legal visitors decides to stay in the country in violation of the terms of their admission, the impact on the unauthorized migrant population can be significant. The Center has previously estimated that on average there are 700,000–850,000 new unauthorized migrants arriving annually by all modes of entry. The estimates reported in this fact sheet imply that in recent years some 1 to 1.5% of foreign nationals entering the country on nonimmigrant visas have overstayed. That would be approximately 250,000 to 350,000 people added to the unauthorized population every year or roughly 35 to 45% of the annual flow. An additional number of unauthorized migrants enter the U.S. every year with a Border Crossing Card. With these additional entries, the Center estimates that the annual flow of new unauthorized migrants is almost evenly divided between those who enter legally and those who do not.

Estimating the Number of Visa Overstayers

Although Congress authorized several initiatives to track foreign visitors following the 1993 World Trade Center bombing and then again after the 9/11 attacks, the U.S. government currently has no means of determining whether all the foreign nationals admitted for temporary stays actually leave the country. The most extensive of those initiatives, the U.S. Visitor and Immigrant Status Indicator Technology (US-VISIT), is currently being tested at 12 airports around the country, according to the Department of Homeland Security.3 When fully implemented, US-VISIT is supposed to provide computerized records of arrivals and departures and a means of checking the identity of the visitor with biometric data. In the meantime only hand-written forms track some foreign visitors.

Currently, most non-immigrant arrivals, i.e. foreign nationals admitted with a visa for a temporary stay, are asked to fill out a form known as an I-94 Arrival-Departure Record when they enter the country. The top half of the form is given to the immigration inspector who allows the person into the country and the bottom half is supposed to be collected on departure. A 2003 report by the U.S. Government Accountability Office (GAO) found “there is no accurate list of overstays” because not all departure forms are collected and not all can be matched to arrival forms.4 In 2001, according to the GAO, 20% of I-94 arrival records had no matching departure record. Mexicans and Canadians entering the country with Border Crossing Cards are not required to complete an I-94 unless they are requesting an extended stay. In effect, the government has a pretty good idea of how many people come into the country if they fill out one of the forms, but it does not have a full count of how many leave.

Leaving aside the security concerns, this situation poses a statistical challenge for researchers. Since there is no systematic tracking of temporary visitors, the number of people overstaying visas can only be estimated. The basis for almost all such estimates is the work of Robert Warren, a veteran demographer who was employed for many years at the U.S. Immigration and Naturalization Service, which has since been subsumed into DHS. Over the course of the 1990s Warren analyzed internal data files for I-94 arrival and departure forms and developed a methodology for estimating the size and key characteristics of the overstay population. This methodology was refined over time with revisions suggested by the GAO and academic researchers. The last time Warren applied his methodology to data gathered from the I-94 forms was in 1997, and if the full data collection and analysis effort has been repeated by anyone in the government since then, the results have not been made public.

(Warren’s 1997 report describing his methodology and findings does not appear to be readily available on the Internet and so a copy is posted accompanying this fact sheet).

Unfortunately, there is little hard data on which to base estimates of the number of unauthorized migrants who entered the country by using a Border Crossing Card. But, given that the traffic is so enormous—as noted above, an estimated 148 million entries in 2004—if even a minuscule share of these individuals overstayed, they would contribute significantly to the unauthorized population.

Starting in 1998, a new credit-card style document with a biometric identifier such as a fingerprint was issued for regular border crossers. Between 1998 and the 2001 deadline for the replacement of old cards, the Department of State issued more than 4 million of the new cards to Mexican nationals. These authorize visits of up to 30 days within a border zone of 25 miles along the border in California, Texas and New Mexico and 75 miles of the border in Arizona. Cardholders who want to travel further or stay longer must apply for an exception and file an I-94 form.

Cardholders can easily overstay their visits since, unlike with I-94 forms, there is no attempt to check on whether the border crossers leave. Moreover, border crossing cards have been used fraudulently by others to cross because the biometric identifiers are not checked for all border crossers or at all ports of entry. The Center estimates that 1.7% of Mexicans entering the country each year on nonimmigrant visas become unauthorized overstayers, based on Warren’s data. Assuming that the rate of overstays for Mexicans holding Border Crossing Cards is similar and that this population has built up over time, produces an estimate of 250,000 to 500,000 cardholders who have become part of the unauthorized migrant population.

The term “unauthorized migrant” is used in reference to the Pew Hispanic Center’s estimates of the unauthorized migrant population because the statistical methodology involved in deriving the estimates requires the inclusion of some persons who have temporary permission to reside in the U.S. or whose immigration status is unresolved.

Appendix A. Detailed Methodology and Estimates

Warren (2003) applied these shares to his 2000 estimates to arrive at an estimate that 33% of the unauthorized migrants were overstays.6 We apply these percentages to our 2005 estimates subdivided by country of birth and period of arrival. For pre-1990 entrants in 2005, we use an average of Warren’s pre-1982 and 1982-88 estimates; for 1990–97, we use Warren’s percentages for 1992–96. For the 2005 migrants who arrived in 1998 ro later, we assume a 10% decrease in overstay rates for Mexicans and Central Americans and a continuation of the 90% overstay rates for other migrants.

Since they were based on Warren’s 1997 data, these estimates of overstays are derived without direct reference to the number of nonimmigrant arrivals in more recent years. So, as a check on the validity of the assumptions, the Center compared the estimated overstays by migrants arriving in 1998 and later with the numbers of nonimmigrant arrivals for the 1998–2004 to compute “apparent overstay percentages.”

These calculations imply that 1.3% of all nonimmigrant arrivals between 1998 and 2004 resulted in overstays, and that the proportion varies by country of origin. As one would expect, the share of Mexican legal visitors who overstay is lower (1.7%) than for than of Central American (3.2%) or South American (2.4%) nationalities because it easier for Mexicans to make illegal entries and harder for them to get visitor visas. Although almost all unauthorized migrants from Europe arrive with temporary visas, the number of European overstayers is a relatively small share (less than one-half of one percent) of the very large flow of legal visitors from that region.