The younger and more recently arrived respondents to the survey are better educated than their predecessors. They are also more likely to come from Mexican states that have become sources of migration in recent years and are gravitating to parts of the United States that have only recently become settlement areas for Mexican migrants, such as New York City and Raleigh.17 The vast majority of Mexican migrants applying for the matrícula consular arrived in the U.S. within the past 10 years and a high plurality migrated just in the past five years. These migrants are mostly male, young, relatively unskilled in English and do not possess a U.S. government-issued photo ID.

This appendix discusses only a few demographic characteristics of the sample of Mexican migrants. The economic relevance of these traits is developed in the main body of the report. The sample in the Survey of Mexican Migrants consists of 4,836 persons. The majority—59%—were male. Not all respondents reported working in Mexico or in the U.S., principally because the sample includes students, housewives and retirees. Of those who reported working, 65% were male. In that respect the sample matches the gender distribution of the labor force in Mexico. A small majority—55%—of the sample reported speaking little or no English. Not surprisingly, fluency in English varies with factors such as years in the U.S. and education level. Details on these and other attributes are available in the first report on the Survey of Mexican Migrants issued by the Pew Hispanic Center (Suro, 2005a).

The Education Level of Mexican Migrants: Poor But Improving

Most Mexican migrants applying for the matrícula consular have not completed high school. Only 22% reported having a high school degree or its equivalent and just another 6% said they had attended at least some college (Table A1).18 This means that 72% of respondents either did not attend or graduate from high school. The largest single group of workers (37%) is that with lower secondary or vocational training. There is virtually no difference in the educational credentials of male and female respondents.

Even though the education level of Mexican migrants responding to the survey is relatively low, it is similar to that attained by the Mexican population (ages 15 and older), according to the 2000 census in that country. When their level of education is compared with the education distribution of the population in Mexico, survey respondents are less likely to have attended college—6% versus 11%—but also more likely to have a high school degree—22% versus 17%. Similarly, more respondents (37%) acquired secondary or vocational training than the overall population in Mexico (24%).19 In other words, Mexican migrants in the survey are drawn from neither the low nor the high end but the middle of the education distribution in Mexico.

The education level of respondents shows distinct signs of improvement among the younger and more recently arrived migrants. Among the older respondents—ages 45 and older—two-thirds or more either had either no education or only a primary school level of education and fewer than 20% graduated from high school or went to college (Table A1). In contrast, at least 30% of the younger migrants—ages 16 to 29—are high school graduates or possess some college education. Much higher proportions of the younger migrants are also likely to have acquired a lower secondary education or vocational training in comparison with the older migrants in the survey. 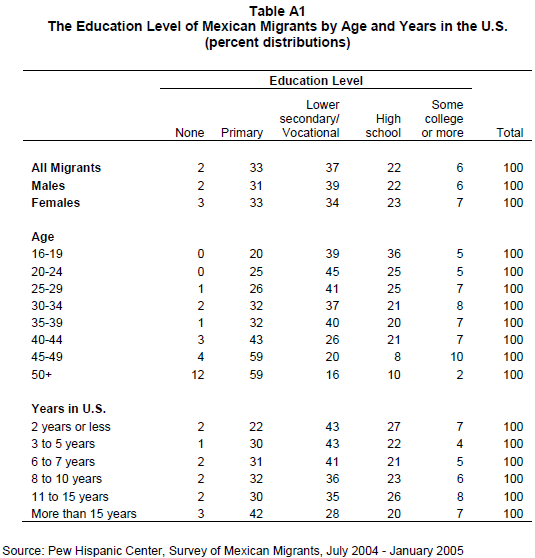 Improvements in education level are also noticeable among the more recently arrived respondents. The proportions of high school graduates do not vary much by year of arrival, but the more recent arrivals are much more likely to have acquired lower secondary or vocational training.20 For instance, 43% of migrants who arrived within the past five years had that level of education compared with only 28% of those who came to the U.S. more than 15 years ago.21 As shown in the main body of the report, the differences in education level also translate into differences in employment patterns as younger, more recently arrived migrants in the survey are less likely to be engaged in agriculture and more likely to work in construction, manufacturing and hospitality.

New States of Origin from Mexico and New Areas of Settlement in the U.S.

A new aspect of migration from Mexico is that migrants are increasingly coming from states further south in the country and less from the central regions of the country. As shown in Table A2, more than one-half (52%) of the respondents who have been in the U.S. for more than 15 years left from the “old” states of Guanajuato, Jalisco, Michoacán and Zacatecas. The geographic source of the migration stream has diversified considerably since then. Nearly an equal proportion of respondents—30%—who have been in the U.S. for five years or less came from the old states and the four new origin states of Guerrero, Oaxaca, Puebla and Veracruz. 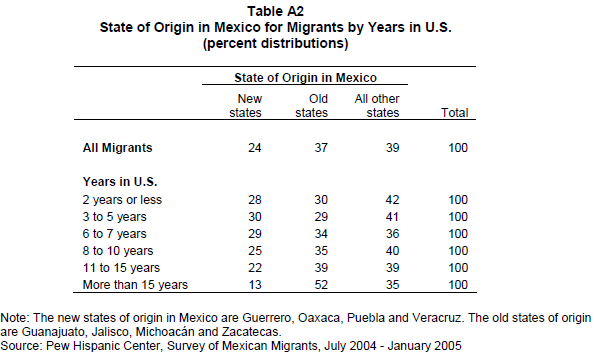 The survey respondents from the new sending regions are more likely to head for new settlements in the U.S. Among the seven sites for the survey, New York City and Raleigh combined attracted 40% of the migrants from the new states but only 5% from the old states [Table A3]. In contrast, respondents from the old states of origin in Mexico are concentrated in Los Angeles, Fresno, Chicago and Dallas. There are no notable differences in the education of migrants from old and new states. However, respondents from the new states are overwhelmingly (65%) male and most (62%) speak little or no English. These are common characteristics of an early stream of migration and places such as New York City and Raleigh are likely to witness an inflow of women and children from Mexico in the near future.

Migrant Characteristics by their Year of Arrival

Most Mexican migrants responding to the survey arrived in the U.S. within the past decade and, in turn, many of them entered the U.S. just in the past five years. The most recently arrived migrants are prominent within new settlement areas in the U.S., such as Raleigh and New York. New arrivals from Mexico are also overwhelmingly young, poorly versed in English, and very unlikely to have a U.S. government-issued photo ID. Moreover, there are proportionally more men among the recent arrivals than among the earlier arrivals, reinforcing the view that women follow men to establish families in the U.S.

The applicants for the matrícula consular tend to be recent arrivals. Nearly two-thirds—62%— arrived in the U.S. within the past 10 years (Table A4).22 More than half of these migrants, or 39% of all migrants, have been in the U.S. for five years or less. The tilt towards recent arrivals among the migrants is not surprising as those who arrived in earlier times are more likely to possess some form of U.S.-issued identity document and, therefore, less likely to apply for a matrícula consular.23 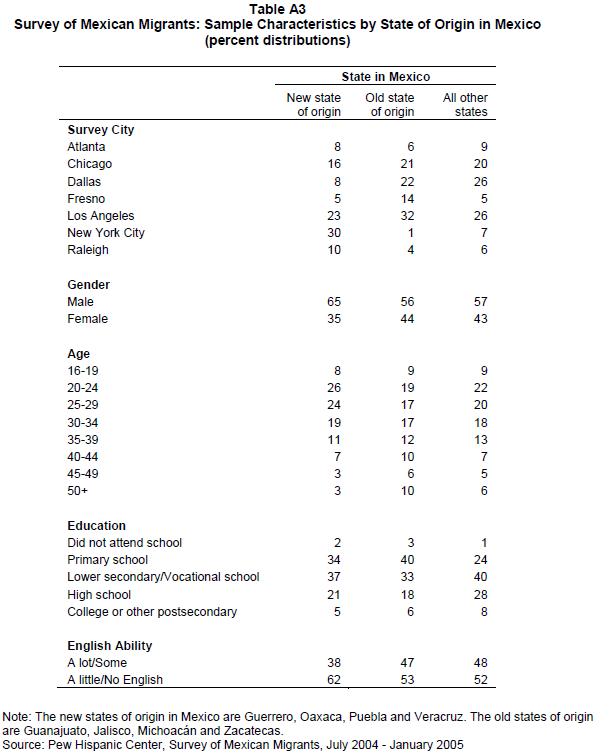 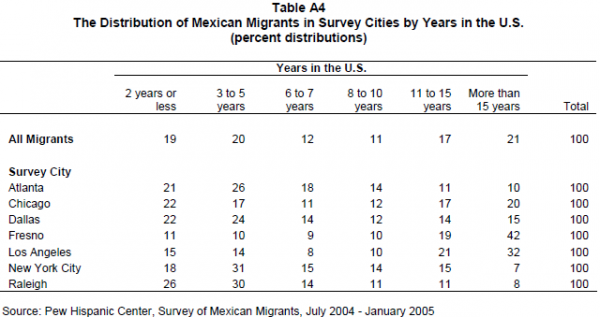 The new arrivals from Mexico who are increasingly populating new destinations in the U.S. are mostly male and very young, speak English poorly and lack a U.S. government-issued ID. These traits are hallmarks of the unauthorized migrant population. About one-half of the Mexican migrants who have been in the U.S. for 11 years or more are men. But, as shown in Table A5, 62% of the arrivals in the past two years were male. The same is true among respondents who arrived three to five years ago. Thus, while unauthorized migration from Mexico features many women, it remains mostly a male phenomenon.

The youth of the Mexican migrants in the survey is striking. Few arrivals in the past 10 years have been 35 or older. For example, 78% of migrants who entered the U.S. 8 to 10 years ago are now age 34 or younger (Table A5). Among those who have been in the U.S. for two years or less, 83% are less than 35 years old. That makes the migrants in the survey much younger than the population in Mexico. The Mexican government census for 2000 shows that among those of ages 15 and older, only 53% are between the ages of 15 and 34. The fact that migrants come from the younger segments of the Mexican population is consistent with the findings from other surveys the Center has conducted in Mexico. When asked whether they would migrate to the U.S. if given the means and opportunity, the young are more likely than the old to respond yes (Suro, 2005c).

The lack of U.S. government-issued documentation and poor English ability are no barriers to migration. More than three-quarters of respondents who left Mexico within the last five years lack a U.S. ID and more than two-thirds report speaking little or no English (Table A5). As shown in the report, these very migrants also appear to find jobs in the U.S. with relative ease, although the quality and stability of those jobs is in doubt. 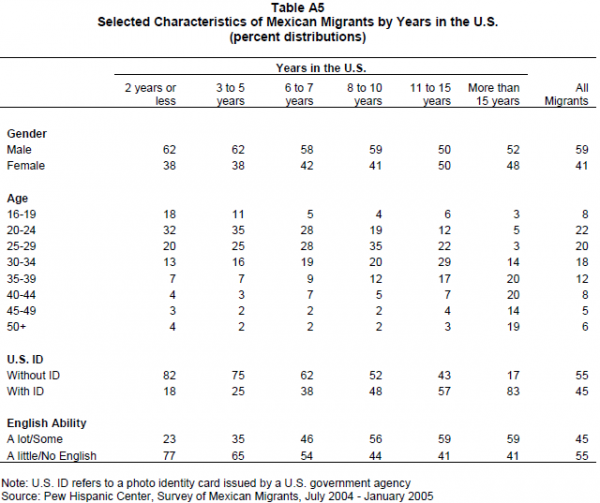 Next: Appendix 2: The Survey of Mexican Migrants
← Prev Page
Page1Page2Page3Page4Page5Page6You are reading page7Page8
Next Page →