Foreign-born youths, particularly recent arrivals, are more likely to be high school dropouts than youths born in the United States. Almost all youths residing in the United States, whether native-born or foreign-born, are in school until age 15. Probably because of compulsory schooling laws, dropout rates are minimal until age 15 (Figure 1). At age 15, nontrivial numbers of youths begin to be out of school. In 2000, 3.3 percent of native-born 15-to-17-year-olds had dropped out of school, in comparison with 11.7 percent of foreign-born 15-to-17-year-olds.

The beneficial effect of arrival early in childhood could be due to several factors. Fluency in English is related to school outcomes and English language acquisition is easier for younger children and increases with the time spent in the United States (NCES, 2004b). Alternatively, early arrivals are nearly exclusively educated in the United States and are a reflection of the quality of U.S. schools. On average, the quality of schooling received by immigrants in the United States might be above that of schools in other countries. Finally, it is often thought that the act of migration in and of itself has negative consequences for academic outcomes (Warrren, 1996). Migration may disrupt the peer networks valuable for gaining information and academic support. Migration may also generate feelings of alienation from school peers and loss of self-esteem (Kao, 1999). The disruptive effects of migration might be reduced for children who arrive before the onset of school and may dissipate with additional time in the United States. 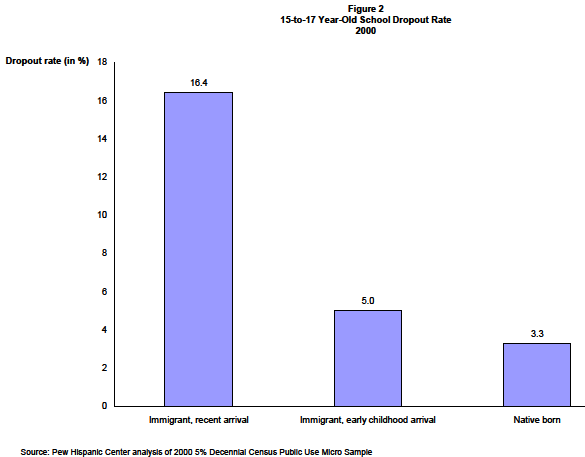 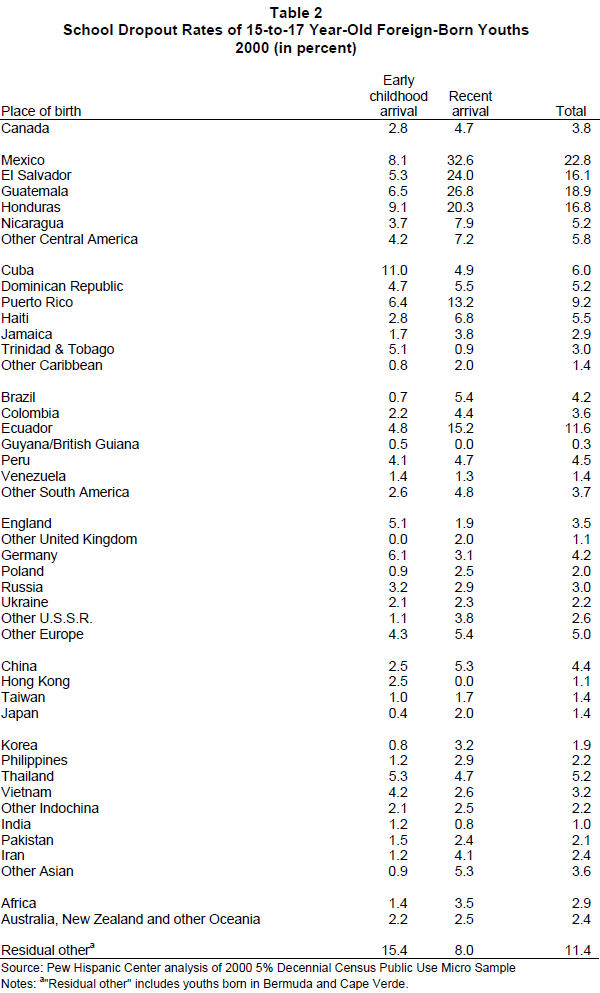 Early arrivals from Mexico and some Central American countries are more likely to be out of school than native-born youths. Some of the gap in school enrollment between these early arrival groups and native-born youths can be accounted for by the disadvantaged family background of these youths. Parental education levels tend to be much lower for youths from these countries, and fewer of these youths are residing in intact families in comparison with native-born teens. Accounting for these disadvantages moderates further the difference in school enrollment between Mexican and Central American early arrivals and native-born youths (Hirschman, 2001).

The dropout data clearly show, for nearly every country of origin, that greater time in the United States during childhood is associated with a greater likelihood that a youth will be in school. This evidence raises questions about the effects of exposure to U.S. schools and norms and culture on foreign-born youth outcomes. Some sociologists and psychologists assert that youths from certain countries of origin, such as Mexico, Cuba and the Philippines, display worse outcomes the longer they are in the United States (Portes and Zhou, 1993; Suarez-Orozco and Suarez-Orozco, 1995; Perlmann and Waldinger, 1998). Their concern is that immigrant youths who belong to racial or ethnic minorities and reside in disadvantaged central city neighborhoods may begin to emulate the disaffected behavior of their native-born peers the longer they are in the United States.1 This contrasts with the more straight-line, classic assimilation expectation wherein immigrants initially struggle in their adjustment to the new society, but with additional time in the United States display greater success. Table 2 suggests that longer exposure to the United States is beneficial for foreign-born youth, not deleterious in its effects. The incidence of dropping out is heavily concentrated among recent arrivals, not the early childhood arrivals. This applies to immigrant youths of Hispanic or African American identity as much as to other racial identities. As the next section shows, a large measure of immigrant dropping out is related to the quality of the education received before the youths migrated, not to their experience in U.S. schools and society.