The concepts and methods used to measure race changed between the Current Population Surveys (CPS) of November 2000 and November 2004. While these changes have no impact on the definition and measurement of the Hispanic population, they do affect the comparability of the non-Hispanic white, non-Hispanic black, and other non-Hispanic populations between 2000 and 2004. To assess changes in the racial composition of the electorate, we employed techniques to map the racial categories from 2004 into the definitions used in 2000. This appendix describe the methods and rationale for developing the alternative racial groupings for the November 2004 CPS.

The November 2000 CPS used the racial concepts and definitions that had been in place since the late 1970s and had been used in the CPS for more than two decades and in the decennial censuses of 1980 and 1990. Respondents could choose among four major race groups: white; black; American Indian, Alaska Native (AIAN); or Asian or Pacific Islander (API). The respondent could choose only one racial identity and all respondents were placed in one of the four categories.2

In the 1990s, the Office of Management and Budget reviewed the race designations used in federal statistics. As a result of this review process, the racial categories and concepts used were altered for Census 2000 and for the CPS beginning with the March supplement of 2002 and all other CPSs beginning with January 2003. The November 2004 supplement used these new concepts that basically included two significant changes. First, the number of major race categories was increased to five by splitting the API category into “Asian” and “Native Hawaiian/Pacific Islander.”3 Of greater significance, however, was the option that allowed respondents to identify themselves as being of two or more racial identities. As a result, there are 31 possible categories of responses to the race question—5 single races, 10 combinations of 2 races, 10 combinations of 3 races, 5 combinations of 4 races, and a response choosing membership in all 5 race groups.

In November 2004, approximately 4.0 million non-Hispanic respondents chose more than one race. Although these respondents represent only about 1.6 percent of the non-Hispanic population, they can affect comparisons of changes in the racial distribution of the population and of voters between 2000 and 2004. One alternative for comparing non-Hispanic white, black, and Asian populations in 2004 with 2000 is simply to report the number of non-Hispanics choosing white alone, black alone, and Asian alone plus Hawaiian/Pacific Islander alone for 2004. Any persons that identified as multiracial would not appear in the single race categories. Appendix Table A1 reports the size of non-Hispanic single race populations using this methodology; the “other” category includes all non-Hispanics reporting more than one race and all persons reporting AIAN alone. This alternative is used for most tabulations in this report except those measuring changes in racial distributions because it is not comparable to the 2000 racial categories, since the multiracial persons in 2004 had identified themselves as being a single race in 2000.

Appendix Tables B1 and B2 compare racial distributions in 2000 with data from 2004 in which multiracial responses are reassigned to single race categories. The assignment proceeds with a hierarchical reassignment algorithm designed to reproduce as closely as possible a historically consistent set of demographic categories:

Note that this procedure can be used for classifying the Hispanic population by race as well. However, the total Hispanic count is unaffected by this algorithm.

Appendix Table A1 (Below) reports the size of the November 2004 non-Hispanic race groups using the “single race alone” method and according to the reassignment algorithm that reallocates multiracial persons to a single race category. The reassignment shifts about 4 million persons from the “other” category, reducing it by about 70 percent. The white population is increased by about 1.8 million or 0.9 percent relative to the single race categorization; the black, by 1.3 million or 3.6 percent; and the Asian/Pacific Islander by 0.9 million or 7.3 percent. For the adult population, the total reassignment is 2.3 million but the percentage changes are slightly smaller, reflecting the greater prevalence of multiracial responses among children. 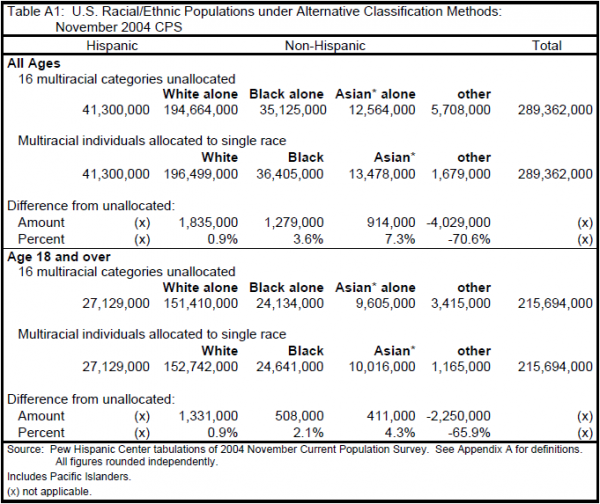 The Latino Electorate: An Analysis of the 2006 Election
The Hispanic Electorate in 2004
Millennials Make Up Almost Half of Latino Eligible Voters in 2016
Dissecting the 2008 Electorate: Most Diverse in U.S. History
A Record 24 Million Latinos Are Eligible to Vote, But Turnout Rate Has Lagged That of Whites, Blacks