The president’s proposal hence divides the population into two groups. Persons age 55 or older will experience no change in the determination of their Social Security benefits and will not have access to voluntary personal investment accounts. Those age 54 or under would be in the new system with the option of personal investment accounts. A subset of this younger group, individuals between the ages of 45 and 55, would be young enough to be in the new system but would reach age 65 in a relatively few number of years, which might limit their ability to realize substantial gains on their investments.

Table 1 indicates that different racial and ethnic groups have different levels of exposure to the personal investment account proposal. Whites are an older population. More than a quarter of all whites are age 55 or older (as of March 2004) and are not directly affected by the president’s proposal (Figure 1). By contrast, only 10 percent of the Hispanic population is age 55 or older – 4.3 million individuals out of an estimated 40 million Latinos. Thus a greater share of the Latino population would see its retirement finances affected by changes of the sort proposed by the president. 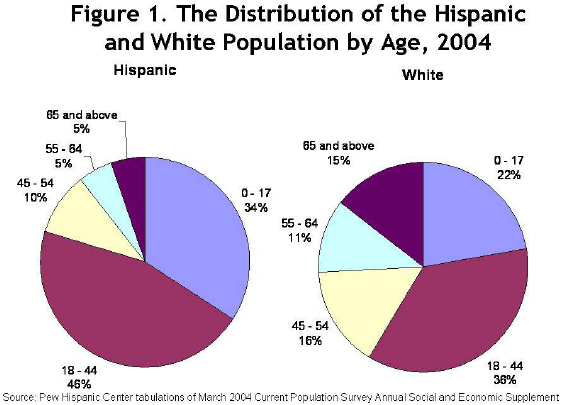 Under the president’s proposal, workers now between the ages of 40 and 55 could opt to invest some of their payroll taxes in a personal investment account beginning in 2009. Individuals in the 45-to-54 age bracket today are young enough to be in the new system the president proposes, but they are also old enough that their investment accounts would operate on a relatively short time horizon if their goal was to accumulate a balance that could supplement their traditional Social Security benefit. The oldest of these workers, for example, would reach age 65, the current retirement age, in 2015 and thus would have only six years for their investment accounts to accumulate gains before they started drawing them down.

It should be noted that individuals between the ages of 45 and 54 are not necessarily the individuals whose total retirement benefits would most likely decline under the investment account proposal. Which ages might experience the largest gains or losses under the president’s proposed change depends on several factors, including the manner in which the guaranteed Social Security benefit will be determined for those under age 55. So, it is impossible to assess presently which age groups will fare better or worse with a combination of investment accounts and a modified structure for guaranteed benefits. But it is certainly true that persons between the ages 45 to 54 will have less time to adjust to and gain from the new system in comparison to younger workers, and that will have a specific impact on the Latino population.

Nationwide, about 41 million persons are in this sensitive 45-to-54 age bracket (Table 1), of whom almost 4 million are Latinos. As discussed in Section III below, the financial market experience and knowledge of Hispanics in this age group probably puts them at a disadvantage in facing the challenges of managing an investment account with a short time horizon. Only 40 percent of Hispanic workers in this age bracket participate in a work-based retirement plan, in comparison with 63 percent of white workers of the same age. Fewer than 30 percent of Hispanics ages 45 to 54 own stocks, bonds or other long-term financial assets, whereas almost 70 percent of whites in this age bracket own such assets. Relative to whites, these Hispanics have less financial savvy and experience. The personal investment account proposal would challenge their financial acumen, especially with retirement just around the corner.

More than half of all 45-to-54-year-old Latinos (2.2 million) were born outside the United States and many of them arrived during the 1970s and 1980s. These included a large number who initially lived here without authorization, and many of these would have been among the nearly 3 million people who became legal permanent residents under the amnesty provisions of the 1986 Immigration Reform and Control Act (IRCA). In comparison with their native-born Hispanic peers and with non-Hispanic whites, these workers have a low earnings history and lower levels of wealth and are less likely to have a pension. Thus, changes in the guaranteed Social Security benefit level may have a significant impact on these foreign-born Latinos given their lack of other sources of retirement income, regardless of whether or not they choose to participate in personal investment accounts.

Looking at another segment of the population – people now under the age of 45, who would have more time to plan and contribute to personal investment accounts – President Bush’s proposal would again have a distinct impact on the Latino population because of its demographic characteristics. Latinos are more concentrated in this age group than other major racial and ethnic groups. Four out of five Latinos are under age 45, in comparison with fewer than three out of five whites. And Hispanics have a bigger stake in the president’s proposal than their presence in the general population suggests. Fewer than 7 percent of persons age 55 or older are Latinos, but about 18 percent of the population under 45 years of age is Latino. In short, a greater share of Hispanics than whites would be directly affected by the president’s proposal.

In sum, proposed Social Security changes currently on the table will have their largest impact on persons less than 55 years old. Those between the ages of 45 and 54 are on the cusp of change – young enough to be affected by reform but perhaps not young enough to realize the potential gains from reform. The youth of the Hispanic population ensures that relatively few of them fall into this age bracket. But those who do are underprepared for retirement in comparison with whites and so are more susceptible to the particulars of reform. The retirement security for the largest segment of the Latino population, the 32 million Latinos under the age of 45, would be directly impacted by the president’s proposal, and thus we need to consider the behavior and well-being of today’s young Latinos to fully distill its implications for the Latino population.

Next: III. The Role of Social Security for Older Hispanics
← Prev Page
Page1You are reading page2Page3Page4Page5Page6
Next Page →