Recent research conducted in both the United States and Mexico has demonstrated that both the nature of the migrant stream coming north and its target destinations have been changing since the 1980s (Massey, Durand and Malone, 2002; Suárez-Orozco and Páez, 2002; Bean and Stevens, 2003; Ascencio, 2004; Hill, 2004). In broad terms, more women have joined what has been a male-dominated flow and levels of education have increased, reflecting both better education in Mexico and a greater share of migrants from towns and cities rather than agricultural areas where educational achievement is lower. On the U.S. side of the border, new arrivals have continued to flow into traditional destinations such as Los Angeles even as other newcomers have headed to new settlement areas such as New York and Raleigh where the Mexican population had been relatively small. All of these trends appeared to accelerate in the late 1990s when Mexican migration surged in response to an economic crisis in Mexico and a booming economy in the United States.

This survey offers fresh insights into these trends by permitting comparisons among the samples drawn in various U.S. cities. These comparisons illustrate the manner in which differences in the nature of the migrant stream going to specific localities translate into differences in the impact on host communities.

At the most basic level, the differences in the migrant streams going to traditional versus new settlement areas are evident in the respondents’ gender.

Los Angeles and Fresno are both longstanding destinations for Mexican migrants, although of different sorts: The first is a vast metropolis and the second is at the center of an agricultural region. In both, however, the shares of male and female respondents are roughly equal. Meanwhile, males are a disproportionately large share of the respondents in Raleigh and New York, which is typical of a newly developed labor migration. The sex ratios in these city samples correlate to the findings of recent studies that have differentiated among traditional and new settlement areas using data from decennial census counts (Suro and Singer 2002; Singer 2003). Sex ratios are not a measure of how recently individual migrants have arrived in the United States but rather they are an indication of the maturity of the migrant stream. In the case of a labor migration such as the flow from Mexico to the United States, men typically make up a highly disproportionate share of the initial settlers in a given location. This trend is highly evident in the data from this survey.

The share of the sample that reports living in the United States for five years or less varies significantly from one city to another. It is twice as high in Raleigh, the newest of the new settlement areas, as in Los Angeles, the most traditional of the traditional settlement areas.

The differences in migration patterns are also evident in the respondents’ ages. As one would expect with more recent migrant inflows, larger shares of the samples in the new settlement areas fall into the youngest age range than in traditional settlement areas.

Differences in the composition of a migrant stream can have important consequences for the host community. Larger shares of younger, more recently arrived migrants, for example, state intentions to return to Mexico in a matter of years rather than settle permanently in the United States. So, while 17 percent of the sample in Los Angeles stated an intent to return in five years or less, in Raleigh the comparable figure was 42 percent. Regardless of whether or not individuals actually carry out these plans, such intentions can affect decisions on employment, housing, community engagement and other matters.

A more tangible and immediate impact can be measured in the number of migrants who have children enrolled in U.S. public schools, and on this point the results vary significantly from the new to the traditional settlement areas. As would be expected, the more mature migrations produce a greater share of migrants with children being educated in the United States. Even in new settlement areas, however, a substantial fraction of the respondents reported having children in U.S. public schools. 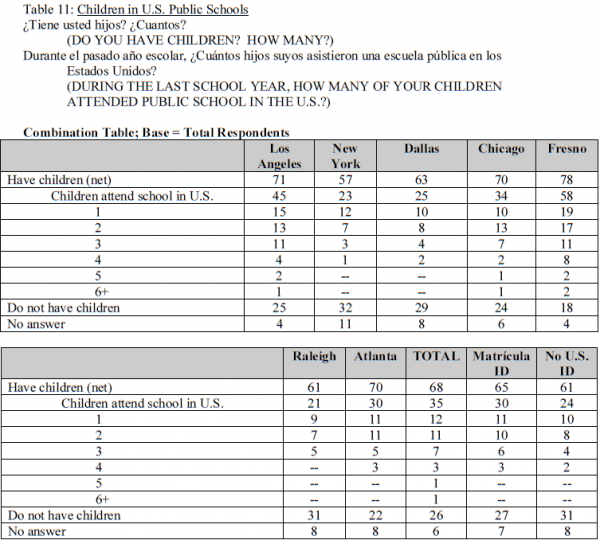 Next: VI. Photo ID Issued by a Government Agency in the United States
← Prev Page
Page2Page3Page4You are reading page5Page6Page7Page8Page9Page10Page11Page12
Next Page →