The survey asked respondents how long they thought they would remain in the United States and presented them with a list of options running from the short term to the long term. (Table 5). The answer that was marked most often, by a substantial margin, was “mientras pueda” (as long as I can). Another large share answered “toda la vida” (all my life). Together, these views of living in the United States as an indefinite or permanent endeavor accounted for a majority or a near majority of the sample as a whole and in each city sample. While 59 percent of the total sample picked one of these two options, a sizeable share of respondents thought of themselves as comparatively short-term migrants, with 27 percent saying they thought they would remain in the United States for five years or less. 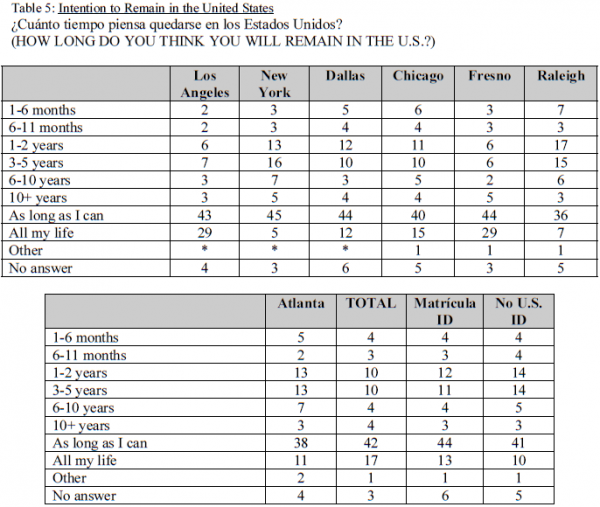 Stated intentions to remain follow some similar demographic patterns across the various cities. Most notably, the long-term responses were favored by a greater share of women than men. So, in the total sample women picked “as long as I can” by a more than 2-to-1 margin over the options totaling five years or less while men were about evenly split.

Also, younger respondents and those who had arrived more recently were more likely to say they intended to return to Mexico in a few years than older migrants and those of longer tenure.

The desire to stay for the rest of one’s life follows a clear gradient according to age. The share of respondents who stated that intention increases from the youngest (14% among those 18 to 29) to the oldest age groups (40% among those 55 and older). A similar gradient is also evident according to the amount of time the respondent has been in the United States, increasing from the more recently arrived (7% for those with five years’ residence or less) to those with longer tenure (33% with 15 years or more).