The Survey of Mexican Migrants asked four questions designed to probe respondents’ willingness to participate in immigration programs that would offer different types of legal status to those who are currently unauthorized. In particular, the questions attempted to gauge relative interest in a program of the sort proposed by President George W. Bush that would offer temporary legal status with a requirement to eventually return to the country of origin versus a program that would eventually offer permanent legal status, which is the alternative pressed by some leading Democrats.

The overall finding from the survey data is that both alternatives enjoy very broad support with little difference between temporary and permanent solutions. In the full sample, respondents said they would participate in either a temporary or permanent legalization program by margins of 4-to-1 (Tables 1 and 2). Majorities in favor of participation were evident in every geographic area and in every demographic subgroup with the exception of respondents over the age of 55, who comprised only 5 percent of the overall sample. 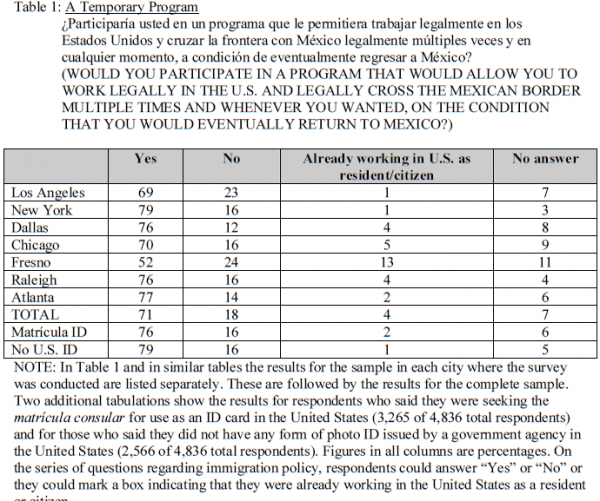 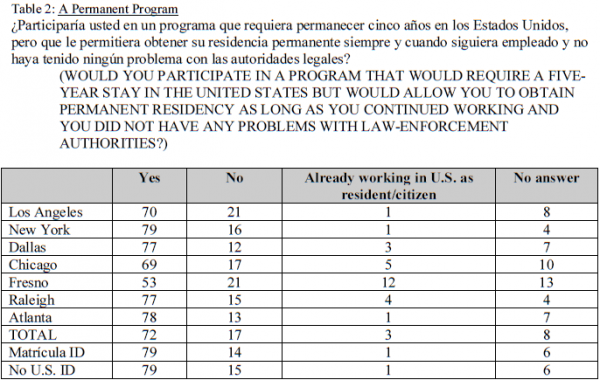 On both the question about a temporary program and the one about a permanent program the highest levels of positive answers (79% on both questions) came from those who said they had no photo ID issued by a government agency in the United States. Similarly high levels of positive answers came from respondents in the 18-to-29-year-old age group (76% on both) as well as those who had been in the United States for five years or less (79% on both)—two overlapping subsamples that each comprise nearly half of the total sample.

Differences in the findings across the seven cities appear driven primarily by the composition of each city sample by age and time of arrival.

Among respondents who said they intended to stay in the United States for “as long as I can” or for “the rest of my life,” a clear majority—68 percent—said they would participate in a temporary immigration program that would require them to return to Mexico. Acceptance of the idea of a temporary program was even higher—80 percent—among those who stated an intention to return to Mexico within five years.

Asked whether family and friends in Mexico would participate in a temporary program, the respondents answered positively in similar measures as they did when asked about their own potential participation (Table 3). 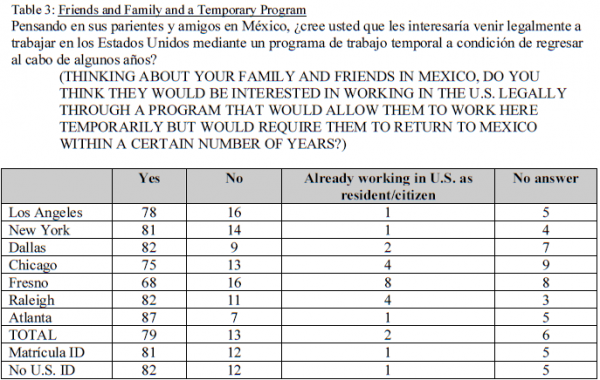 Respondents were also asked whether they would participate in a savings program that could be drawn upon only if they returned to Mexico (Table 4). Such a program is a possible feature of a temporary immigration program, with the intent of encouraging migrants to return to their country of origin. Positive responses to this question were lower but followed the same demographic pattern as the others. 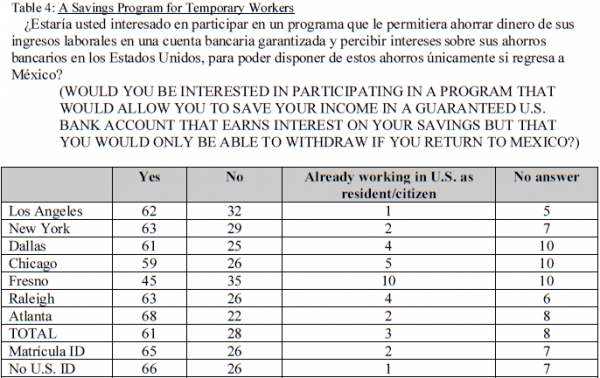 Next: III. Intention to Remain in the United States
← Prev Page
Page1You are reading page2Page3Page4Page5Page6Page7Page8Page9Page10
Next Page →