The major difference between the native- and foreign-born populations is that the bulk of native-born Hispanics (70 percent) are either children or very young adults (Figure 7), while the foreign born are more often either young or middle aged adults (Figure 8). Many of the foreign-born adults in Figure 8 are the parents of the youth shown in Figure 7. Because it is generally one parent who fills out the Census questionnaire, the youth are typically assigned a race by their parents. As these youth mature into adulthood, they may or may not choose to self-identify in the way that their parents currently identify them. These second generation Hispanics are important, because they are replacing immigrants as the major drivers of Hispanic population growth (Suro, 2003). 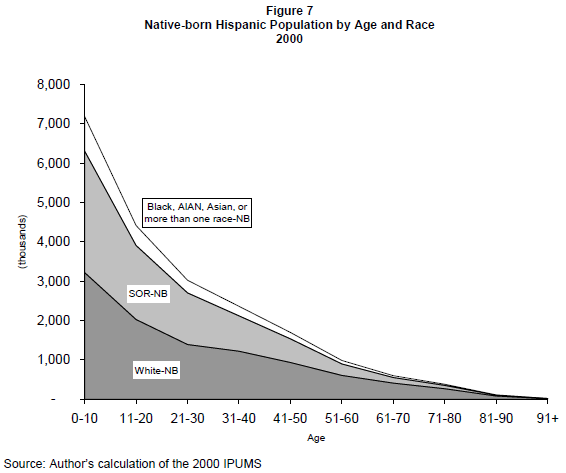 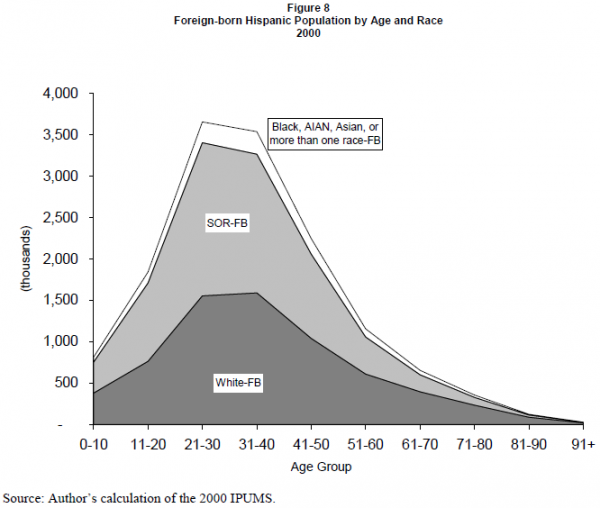 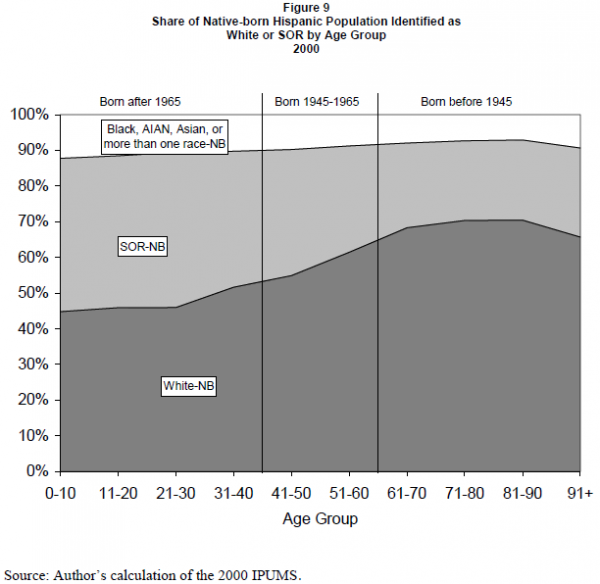 Older native-born Hispanics—those born prior to 1945—most often identified as white (60 percent) in 2000 (Figure 9). In contrast, those born during the post-war baby boom showed a lower level of white racial identity, and a greater preference for SOR identity. Thus, even excluding the numerous young nativeborn children of immigrants, a transition in racial identity appears to have been underway. This transition coincides with the civil rights era and the growth of the Latino immigrant population. An analysis of age cohorts from the 1980, 1990, and 2000 Census suggests that for Hispanic baby-boomers—those born before the beginning of large flows of Asian and Latin American immigrants into the United States— race responses do not change over time. In other words it does not appear that young Hispanic baby-boomers switch their racial identity as they get older. Rather, their race responses seem to be stable characteristics related to the era in which they were born. Within this cohort, responses for white Hispanics are very stable, and to the extent that SOR Hispanics have changed, the shift appears to be from SOR to a non-white or multiple race option in 2000.

Despite the differences between Hispanic native-born baby boomers and their elders, the increase in the share of Hispanics who identify as SOR would not have been as great without the large inflows of immigrants who identified themselves and their children as SOR.

Next: VIII. From Aggregate Statistics to Attitudes
← Prev Page
Page1Page2Page3Page4Page5You are reading page6Page7Page8Page9Page10Page11
Next Page →