In Texas nearly two-thirds (63 percent) of native-born Latinos of Mexican descent say they are white, compared to less than half (45 percent) of those who live outside of Texas.

Settlement patterns, regional historical legacies and current cultural trends also influence Hispanic race responses. Given the preponderance of Mexican origin respondents in the SOR category, the distribution of the SOR Hispanics is highly skewed to the western United States (Figure 6). In fact, California alone accounts for over 5 million of the nation’s SOR Hispanics. The spatial concentration of SOR Hispanics in the west is reinforced because, in Texas, the southern state with the largest Hispanic population, many Latinos identify as racially white. In Texas nearly two-thirds (63 percent) of native-born Latinos of Mexican descent say they are white, compared to less than half (45 percent) of those who live outside of Texas. One can suppose that the unique and complex history of race relations in Texas is a major influence. This is the only state where a large Latino population was caught up both in Southern-style racial segregation and then the civil rights struggle to undo it. 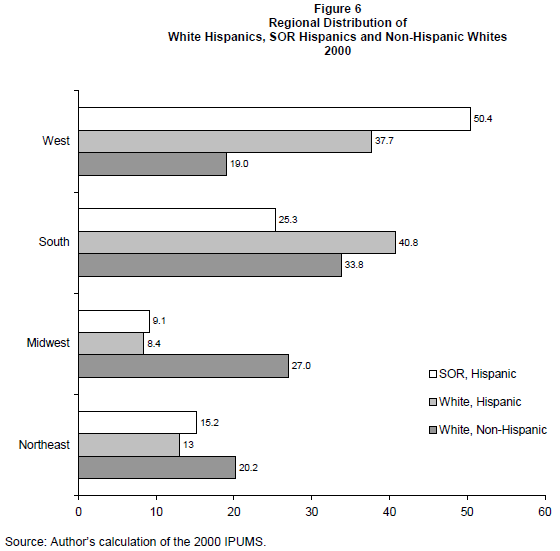 Similarly, among the native-born of Cuban origin in Florida, 91 percent identify as white, while only 5 percent identify as SOR. Among native-born Cubans living outside of Florida, only 66 percent identify as white and 13 percent as SOR. Focus groups also suggested the importance of place in racial identification. In Miami, a majority of respondents took their Hispanic identification for granted and expressed pride in their origins. Yet, in a discussion of whether Hispanics are accepted in the United States, one Cuban origin respondent who agreed that Hispanics were accepted in Miami, New York, and California said:

“If I apply somewhere else, Tennessee, and the application says are you Hispanic or white, I put white because I want to at least have an interview.”

This statement suggests that in this respondents mind, the consequences of identifying as white vary from place to place.

Next: VI. Age and Race
← Prev Page
Page1Page2Page3Page4You are reading page5Page6Page7Page8Page9Page10Page11
Next Page →