For both the native and the foreign born, feelings of inclusion and civic engagement are related to socioeconomic status, which in turn can be related to race. For example, one Cuban American focus group respondent stated it this way,

“When it comes to money, social classes think of themselves as higher or lower. The white always has the highest social prestige and the darker skin always have the lower social prestige, because you have some very dark skinned people who earn a lot of money, and you tell them you’re dark skinned…oh, no, I’m white. One thing has nothing to do with the other.” 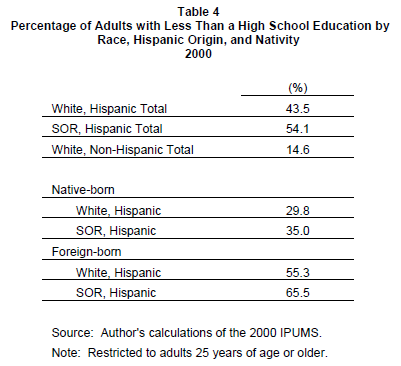 Educational differences between national origin groups do not drive this pattern of lower educational attainment for SOR Hispanics as compared with white Hispanics. Indeed, the pattern prevails for nativeborn household heads of all national origins (Table 5). 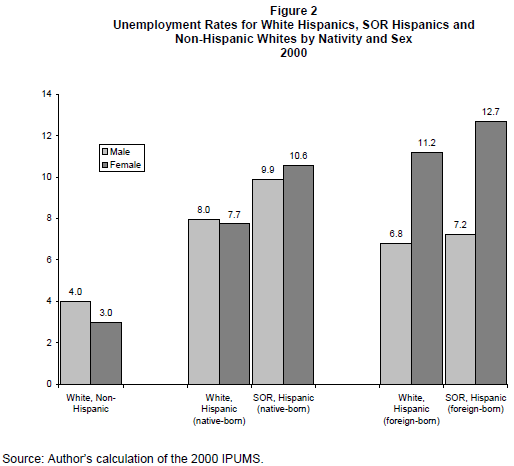 The poverty rate for Hispanics as a whole was 22.6 percent in 1999, more than double the rate (8.1 percent) for non-Hispanic Whites. When Hispanics are disaggregated into race groups, those Hispanics who are white, have lower poverty rates than those who identify as SOR and the difference is greater among the native-born than among immigrants (Figure 3). 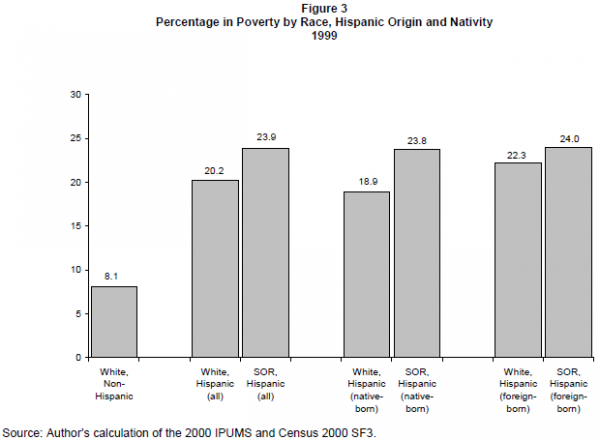 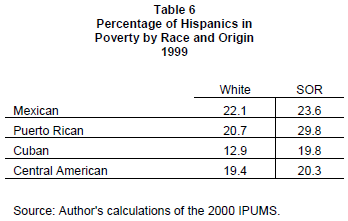 While children in the United States typically have higher poverty rates than adults, excluding children and examining poverty among working age adults still reveals race differences between white and SOR Hispanics (Figure 4). For example, 18 percent of native-born SOR Hispanic adults live in poverty, while fewer, (14 percent) of white Hispanics live in poverty. The importance of limiting the sample to adults is illustrated in a subsequent section on the age profile of white versus SOR Hispanics. 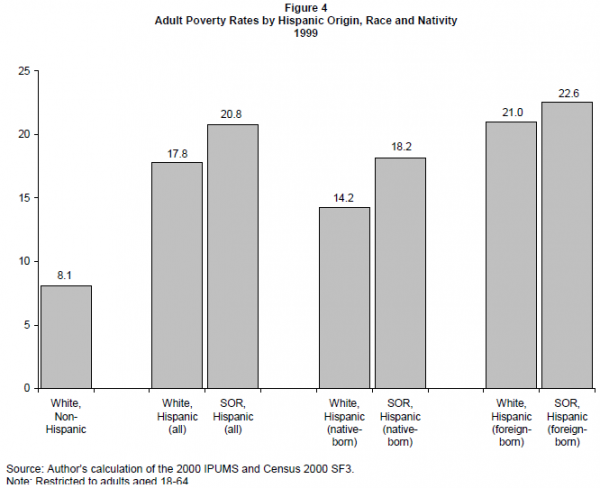 Earnings data for Hispanics are also consistent with the above findings on education, unemployment and poverty. For example, Figure 5 shows that for both men and women the share of SOR Hispanics earning at least $35,000 per year is lower than for white Hispanics. Since much of the wage gap between Hispanics and non-Hispanic whites is driven by educational differences, it is likely that the lower educational attainment of SOR Hispanics as compared with white Hispanics drives a large share of these earnings differences (Smith, 2001). Focus group respondents expressed a link between these objective socioeconomic differences by race and a sense of inclusion. A third generation respondent from Texas expressed the following:

“If we are saying mainstream is white American culture, how much money do they have? Hispanics with more money maybe fit into mainstream culture better than people that have just come from Mexico.” 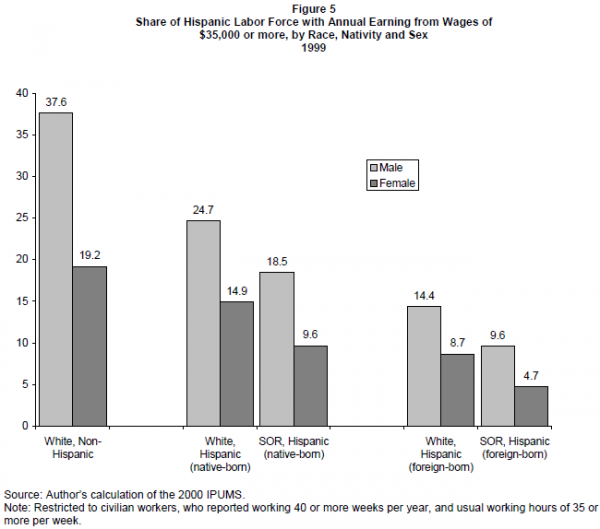 Next: V. Race and Place
← Prev Page
Page1Page2Page3You are reading page4Page5Page6Page7Page8Page9Page10Page11
Next Page →