The “New Economy” of the past decade lifted the prospects of all Hispanics. Still, on average Hispanics lagged behind non-Hispanic whites, mainly due to large-scale immigration and poor levels of education. A strong economy and skills training are essential to Latinos’ future progress.

Improved Prospects in the 1990s but a Growing Salary Gap 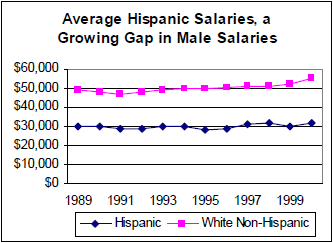 Hispanics’ economic status improved markedly in the 1990s. Unemployment hit a record low, income rose strongly especially among poorer households and poverty fell sharply in the last half of the decade, from 30 to 21 percent. Latino-owned businesses scored solid gains: Their numbers grew by 30 percent, or 4 times the rate for all U.S. firms, and their receipts grew 20 percent faster. 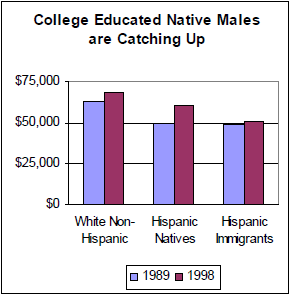 In absolute terms, the pay of Latino workers increased over the 1990s, but not as rapidly as for non-Hispanic whites. In 2000 the average full-time, year-round Hispanic worker earned about $31,000, or about 60 percent of what non-Hispanic whites earned. The pay of whites was up so sharply that the overall pay gap between white and Hispanic workers increased by $7,000 for men and $5,000 for women.

Native-Born and the College Educated are Catching Up

The growing earnings gap between Hispanics and whites partly reflects the impact of recent Latino immigrants who comprise 40 percent of all Hispanics. Over time immigrant wages improve, but lower average education holds down their earnings potential. In fact, studies show that all, or nearly all, of the wage gap between white and Hispanic workers can be explained by gaps in English skills and education. For Hispanic and non-Hispanic white workers with similar skills, there is virtually no wage gap.

The 1990s were particularly good for college educated native-born Hispanics, demonstrating the power of schooling: Males earned 79 percent of white salaries in 1989, but 88 percent by the end of the decade. College educated native-born Latinas earned about the same as white women. Within the Hispanic labor force there has been significant movement into the middle class, but it has been offset by larger increases in the number of poor Hispanics.

Unemployment on the Brink of Recession 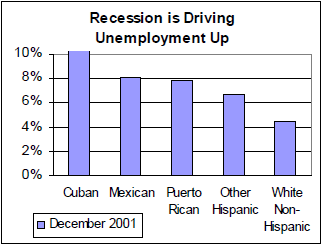 Other than education, getting and keeping jobs has been key to improved Hispanic economic prospects. From its high in 1992, the overall unemployment rate dropped by half to 5.7 in 2000. However, in December 2001, Latino unemployment stood at 7.8 percent, compared to 4.4 percent for whites. Relative to native-born Latinos, immigrants have had lower rates of unemployment during this period of growth. How this story plays out in the current recession remains to be seen.

Education and Strong Economy Key to the Future

The economic fortunes of Latinos hinge on the dominant U.S. labor market headlines of the past two decades. All workers with few skills, particularly those without a high school education, have felt a loss in earning power since 1979. Employers do demand less-skilled workers, but only at declining rates of remuneration. These are the labor market headwinds confronting Latinos and all US workers. But if education and skills are the most basic ingredients for success, the past decade has also demonstrated that Latinos benefit markedly from a robust economy and good job prospects. While neither education nor strong economic growth can be advanced easily, together these two elements are vital to future Hispanic prosperity.