The chart below shows the distribution of adults in the U.S. and selected countries from Western Europe by their household income. Adults in each country are divided into 51 groups with household incomes ranging from $0-4,999, $5,000-9,999, $10,000-14,999, and so on up to the highest income category of $250,000 or greater. Incomes in all countries are adjusted for household size, scaled to a household of three, and expressed in 2011 prices and purchasing power parities (see Methodology for more details).

The selected countries from Western Europe fall into three groups based on their income distributions. The first group consists of Ireland, Italy, Spain and the UK. These countries had among the lowest median household incomes, within the range from $30,000 to $40,000 in 2010, compared with $53,000 in the U.S. As shown in the chart, Ireland, Italy, Spain and the UK have notably higher concentrations of people than the U.S. in the lower tails of the income distributions.

The second group selected from Western Europe consists of Denmark, Finland, France, Germany and the Netherlands. The median disposable household income in these countries was inside the range of $40,000 to $45,000 in 2010. Compared with the U.S., these countries have similar concentrations of adults in the lower tails of the income distributions, but more pronounced peaks in the middle and relatively fewer adults in the upper reaches of the income distributions. 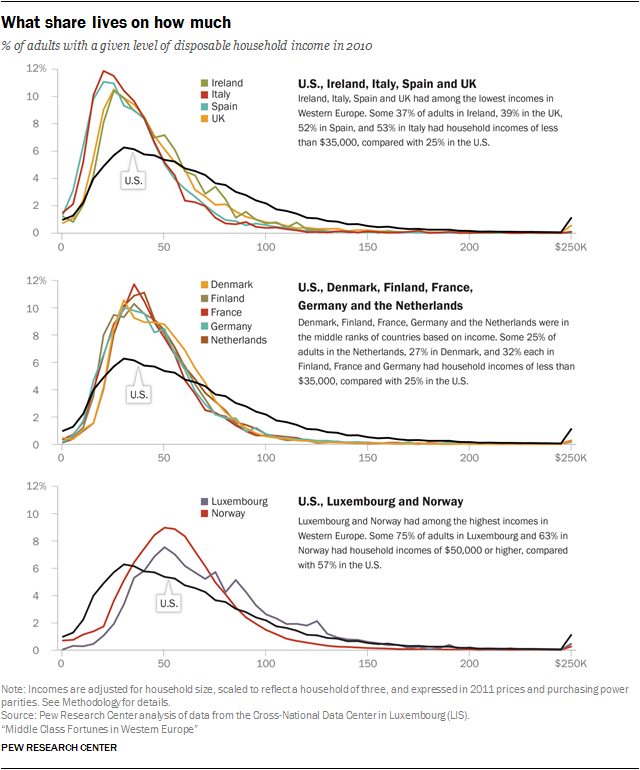 Next: Appendix F: Changes in the shares of adults in lower-, middle- and upper-income tiers
← Prev Page
Page3Page4Page5Page6Page7Page8Page9Page10You are reading page11Page12Page13
Next Page →