What a difference a couple of years can make. With a rising economic tide, a new captain at the helm and a buoyant public mood, the Indian ship of state has the wind at its back. 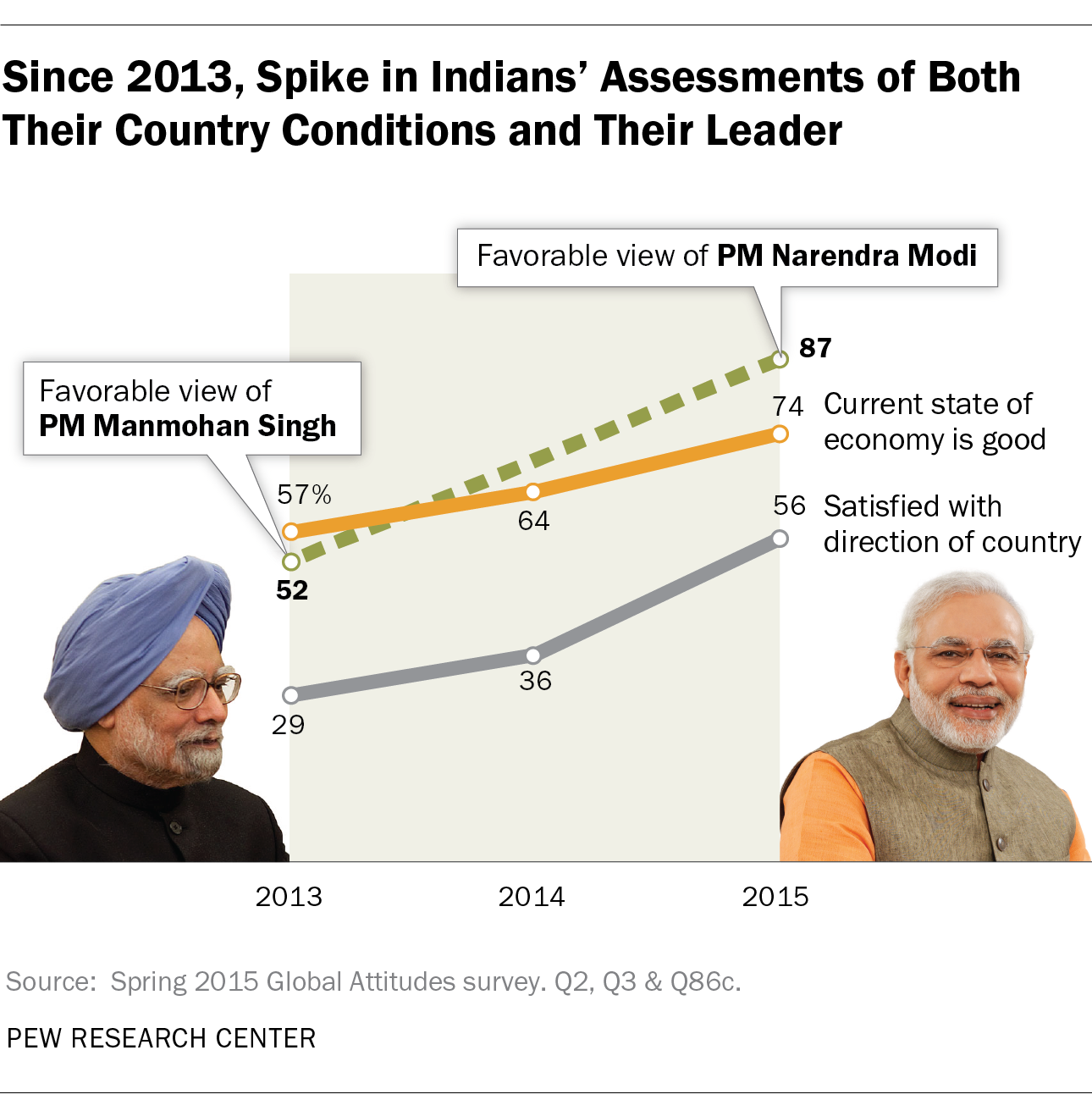 In late 2013, Indians were mired in dissatisfaction with the way things were going in their country. They were only moderately satisfied with economic conditions. And barely half had a favorable view of then-Prime Minister Manmohan Singh, a member of the long-ruling Indian National Congress party (INC).

In 2015, a year after an election swept the opposition Hindu nationalist Bharatiya Janata Party (BJP) into power, public satisfaction with India’s direction has nearly doubled and pride in the country is up compared with findings from a Pew Research Center survey conducted in December 2013 and January 2014. Almost three-quarters of the public now think economic conditions are good. And about two-thirds have a very favorable view of current Prime Minister Narendra Modi. This high level of approval is two to three times that for other leading Indian politicians, according to a new 2015 Pew Research Center survey.

And those who have a lot of confidence in Modi are more likely to expect the economic situation in India to improve a lot over the next 12 months.

Moreover, Modi’s aura has reinvigorated Indians’ faith in their government. About two-thirds of respondents who have a lot of confidence in the prime minister say the influence of the national government is now very good.

On the world stage, Indians still feel underappreciated. But their belief that India gets the respect it deserves is up 12 percentage points after Modi’s first year in office. Moreover, more than seven-in-ten of those surveyed express a lot of confidence in Modi’s handling of international relations.

The Modi phenomenon transcends India’s traditionally partisan politics. On most of the challenges facing the nation, the prime minister and his party enjoy support from both the BJP party faithful and followers of the opposition Congress party. Moreover, Modi and the BJP now have greater backing than Congress in rural areas, traditionally a Congress stronghold. 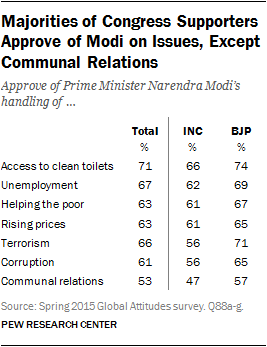 Roughly six-in-ten or more self-identified Congress supporters approve of Modi’s handling of a range of issues: access to clean toilets (66%), unemployment (62%), helping the poor (61%) and inflation (61%). And majorities of Congress backers approve of the prime minister’s efforts against terrorism (56%) and corruption (56%). Only on Modi’s dealing with communal relations do less than half of Congress followers approve of his efforts. 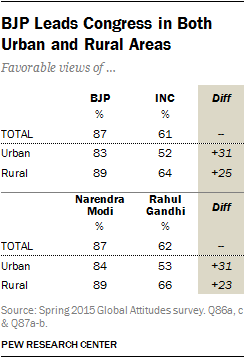 Modi has also succeeded in winning over rural Indians, both for his party and himself. The BJP is now slightly more popular in the Indian countryside than in its cities. And the party’s favorability now exceeds that of Congress in urban areas by 31 points (83% for BJP, 52% for Congress) and in rural India by 25 points (89% for BJP, 64% for Congress). Modi is more popular than presumptive Congress party leader Rahul Gandhi in both rural areas by 23 points (Modi 89%, Gandhi 66%) and in cities by 31 points (Modi 84%, Gandhi 53%).

Nevertheless, Indians believe their country still faces myriad challenges. More than eight-in-ten say crime, jobs, inflation and corruption are very big problems. Concern about air pollution is up 22 points in just the past year, complaints about poor-quality schools are up 20 points and worry about health care is up 15 points.

And Indians see the world as a challenging place. Nearly three-quarters say they are very concerned about global climate change. A similar proportion say neighboring Pakistan poses a very serious threat to India.

These are among the main findings of a new Pew Research Center survey conducted among 2,452 respondents in India from April 6 to May 19, 2015.

Next: 1. The Modi Phenomenon
← Prev Page
You are reading page1Page2Page3Page4Page5
Next Page →

Indians adore Modi
Global Publics Back U.S. on Fighting ISIS, but Are Critical of Post-9/11 Torture
Indians Reflect on Their Country & the World
Indians Want Political Change
India and Modi: The Honeymoon Continues
Americans overwhelmingly say marijuana should be legal for recreational or medical use
Biden Nears 100-Day Mark With Strong Approval, Positive Rating for Vaccine Rollout
Quiz: Are you a Core Conservative? A Solid Liberal? Or somewhere in between?
What the data says about gun deaths in the U.S.
Social Media Use in 2021