The election of Prime Minister Modi thrust India onto the front pages of newspapers around the world. After taking office in late May 2014, Modi made a number of high-profile international trips to the United States, China, Japan and Russia. And he has welcomed numerous foreign leaders to Delhi. The Indian public seems pleased with Modi’s and India’s role in the spotlight on the world stage.

Indians’ pride in their country has grown in recent years. Fully 85% of the public has a very favorable opinion of India, up from 72% in 2014.

Roughly three-quarters (73%) of those surveyed also have a lot of confidence in Modi doing the right thing regarding world affairs. But there is a definite partisan split in such support: 83% of BJP followers express a lot of confidence, yet only 63% of Congress backers and 61% of AAP followers agree.

Ever since Modi has become the international face of India, a growing proportion of Indians think the country’s stature on the world stage has improved: 39% say India is as respected as it should be, compared with 27% who thought that in 2013. Rural Indians (42%) are more likely than city dwellers (32%) to believe that India now gets the deference it deserves. And, again, there are partisan differences about national image: 40% of BJP supporters and 37% of Congress followers say India is respected, but only 13% of AAP backers believe India gets its due. Nevertheless, Indians are still not pleased with how the world sees them: 57% voice the view that India should be more respected around the world. 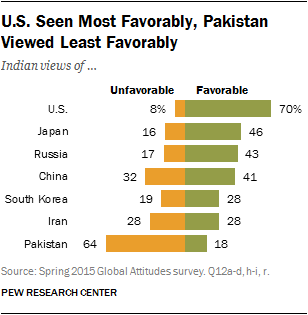 Indians have mixed views about other nations. Seven-in-ten have a favorable opinion of the U.S. That assessment is up 15 percentage points from 2014, when 55% saw the U.S. favorably. America is particularly popular among Indians ages 18 to 29 (75%), but two-thirds of Indians ages 50 and older also see the U.S. in a positive light. Indians with at least some college education (83%) are much more likely than those with only a primary school education or less (61%) to have a positive view of the U.S. 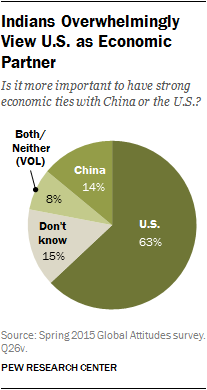 Indians’ appreciation of the U.S. reflects admiration for the American economy. Roughly two-thirds (66%) see the U.S. as the world’s leading economic power – up 19 points since 2014, when only 47% expressed such appreciation. And about six-in-ten (63%) say it is more important for India to have strong economic ties with the U.S., compared with just 14% who hold the view that a closer commercial relationship with China would be in India’s best interest. Nevertheless, Indians are divided as to whether the U.S. has already been or will one day be supplanted by China as the world’s leading superpower. (For more on how Indians’ perceptions of both the U.S. and China compare with those in other nations, see this Pew Research Center report.)

On the issue of Pakistan – a long-running and particularly neuralgic problem in India-U.S. relations – more and more Indians see the U.S. government coming down on their side. Indians say American policy favors India rather than Pakistan by a ratio of nearly four-to-one (45% to 12%). An additional 28% believe that Washington’s policy on the subcontinent fairly balances between Delhi and Islamabad. In 2013, 36% thought the U.S. favored India, while 12% said Pakistan.

Indians look with less favor on other nations. Just 43% have a positive view of Russia, relatively unchanged over the past few years. About four-in-ten (41%) see China favorably, yet that sentiment is up 10 points from 2014. And just 28% are favorably disposed toward Iran. In each case, those with at least some college education have a better opinion of other countries than do those with a primary education or less.

But, for many Indians, especially those living in rural areas, other countries are truly foreign. Roughly four-in-ten Indians express no opinion about Iran and Russia, almost three-in-ten have no view on China, and about two-in-ten say they don’t know how they feel about the U.S. 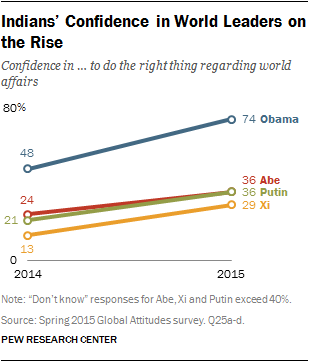 Reciprocal visits by Modi and major foreign leaders may have also boosted those foreigners’ stature in Indians’ eyes. Just 48% of Indians had a favorable opinion of U.S. President Barack Obama in 2014. But in 2015, after Obama visited India and Modi made a trip to the U.S., 74% now see him in a positive light. Indians’ view of Japanese Prime Minister Shinzo Abe has improved by 15 points – 21% in 2014, 36% in 2015 – in the wake of an exchange of visits in Modi’s first year in office. Indians’ impression of Russian President Vladimir Putin is also up, from 24% in 2014 to 36% in 2015. And 29% have a favorable opinion of Chinese leader Xi Jinping, up 16 points from 2014.

However, despite each of these foreign leaders’ recent visits to India and a Modi trip to their countries, 49% of Indians surveyed have no opinion of Putin, 47% voice no view of Abe and 42% express no sentiment about Xi. The only foreign leader who is relatively well-known is Obama (just 17% don’t know him). 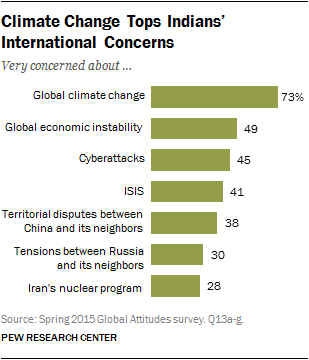 Despite growth in confidence in their own nation, as well as in appreciation for foreign countries and their leaders, Indians see the world as a challenging place. Nearly three-quarters (73%) say they are very concerned about global climate change. And there is a strong regional difference in such anxieties. Nearly nine-in-ten respondents living in northern states are very worried about climate change, compared with about two-thirds in other parts of the country. Indians with some college education or more (80%) are more concerned than those with primary schooling or less (68%).

Similarly, almost half the public (49%) is quite concerned about global economic instability; 45% of Indians are very worried about cyberattacks on governments, banks and corporations; and 41% are quite concerned about the militant Islamic group ISIS. In each case, better-educated Indians, those with at least some college education, are more worried than those with a primary education or less. (For more on how Indians’ perceptions of global threats compare with sentiment in other nations, see this Pew Research Center report.) 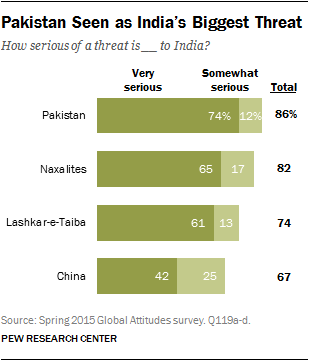 A regional issue – India’s long-standing tensions with Pakistan – is a particular concern for the Indian public. Just 18% of Indians have a favorable opinion of Pakistan, while 64% have an unfavorable view. And this has been the case for some time. Notably, better-educated Indians (76%) are more critical of Pakistan than those with less schooling (58%). Nearly three-quarters (74%) of the Indian public say Pakistan poses a very serious threat to India. Such concern represents only a slight decline in such sentiment over the past year. AAP (81%) and BJP (77%) supporters are more troubled than Congress (67%) adherents. And, in particular, the situation in Kashmir – the northwest border region between India and Pakistan – is judged to be a very big problem facing the nation by 68% of Indians.

Because of, or in spite of, their concerns about Pakistan and Kashmir, a growing proportion of Indians favor talks between Delhi and Lahore to try to reduce tensions between the two countries. Six-in-ten Indians support peace negotiations, up from 53% who favored such negotiations in 2013.

Indians living in rural areas (63%) are greater proponents of such discussions than those living in cities (54%). And AAP (74%) followers are slightly more likely to support talks than are BJP (60%) backers.

But Pakistan is not the only security challenge seen by Indians. Roughly two-thirds (65%) of the public believes that the Naxalites – a Maoist guerilla group that originated in northeast India – pose a very serious threat to the country. AAP (77%) supporters are more concerned than Congress (59%) followers.

Just 42% of the public voices the view that China is a very serious threat to India. This sentiment is relatively unchanged since 2013. There is a notable partisan divide on China. Fully 71% of AAP supporters see China as quite threatening, but only 43% of BJP backers and 35% of Congress followers agree. And geography matters. In northern states, 63% of respondents see China as a very serious threat. But few in the east (36%), south (27%) and west (24%) are that concerned.

When asked to choose the most serious threat to the nation, Indians are quite clear: 48% say Pakistan, compared with 21% who name Lashkar-e-Taiba, 16% who believe it is the Naxalites and just 5% who claim it is China.

Indians Reflect on Their Country & the World