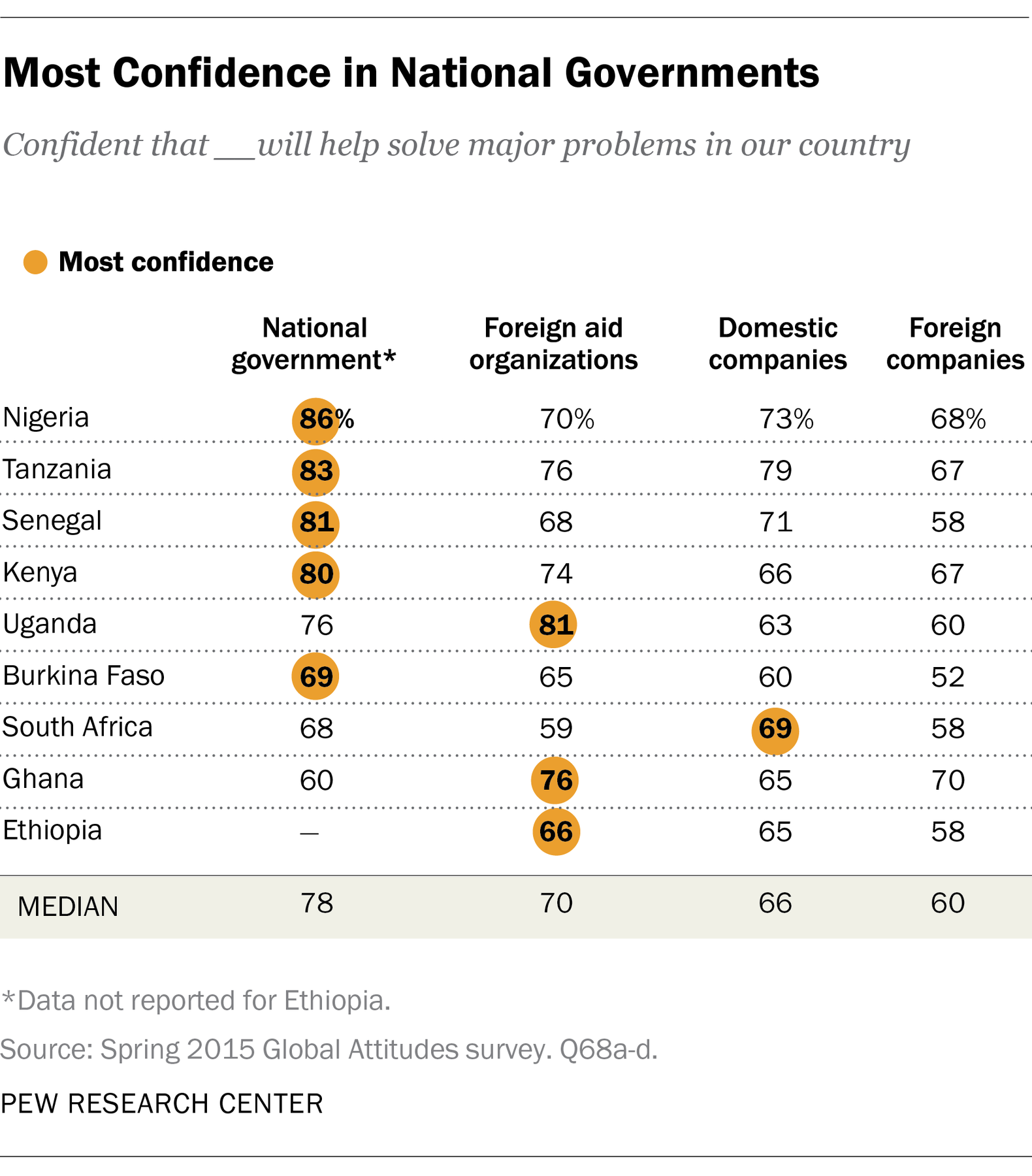 The nine sub-Saharan African publics surveyed express mostly positive views about the ability of governments, foreign aid organizations and businesses to help solve major problems in their country. Majorities across these nations say they have at least some confidence in these institutions, though few say they are very confident.

Moreover, government, aid groups and businesses are also perceived to have flaws. Most say government is run for the benefit of the few, rather than the benefit of all. And while foreign aid programs are seen as effective and as assisting people who need help, many also say such programs are corrupt and inefficient. As for mining and oil companies, although they are seen as having a positive impact overall, many worry about the environmental impact of these extractive industries.

Confidence in Institutions and Organizations

For the most part, people in the nations surveyed believe their governments can help solve major national problems. Across the eight nations where the question was asked, a median of 78% are very or somewhat confident that their national government will help address the major problems facing the country.

In five nations, people express higher levels of confidence in national governments than in the three other types of organizations included on the survey. Still, Nigeria (57%) is the only country where a majority is very confident in their national government.

In South Africa, views about government differ along racial lines. Three-in-four blacks have confidence in the national government, compared with just 44% of people who are mixed-race and 43% of whites.

Foreign aid organizations also receive favorable marks. A median of 70% across the nine nations polled express confidence in foreign aid groups, such as the United Nations. And in Uganda, Ghana and Ethiopia they receive the highest ratings among the organizations tested. Similarly, most of those polled are at least somewhat confident that both domestic (median of 66%) and foreign (60%) companies can help solve major problems. However, there is no country in which a majority of people say they are very confident in foreign aid groups, domestic companies or foreign companies.

Most Say Government Helps the Few 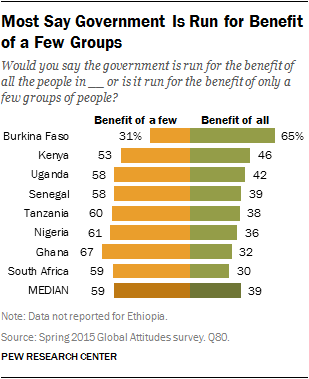 Even though majorities express at least some confidence that their government can help solve major problems, there is also a widely shared perception that government does not serve everyone equally. Aside from Burkina Faso, over half in every other nation where the question was asked say the government is run for the benefit of only a few groups. This view is especially common in Ghana (67%), Nigeria (61%) and Tanzania (60%).

In Kenya, opinions differ by ethnicity. Most members of the Kalenjin (60%) and Kikuyu (54%) ethnic groups say the government is run for the benefit of all (current President Uhuru Kenyatta is Kikuyu, and all presidents since the country’s independence have been either Kikuyu or Kalenjin). Only about four-in-ten from the Luhya (42%) and Luo (40%) groups believe the government works to benefit everyone. 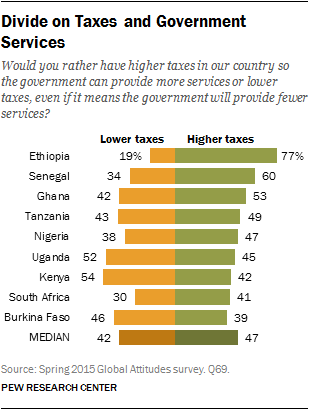 When asked whether they would rather have higher taxes, so the government can provide more services, or lower taxes, even if that means fewer services, views are somewhat divided across the nine nations polled. In Ethiopia, Senegal, Ghana, Nigeria and South Africa, the balance of opinion favors more taxation. Kenyans, Ugandans and Burkinabe lean toward lower taxes. Tanzanians are closely divided (49% higher, 43% lower).

For comparative purposes, the same question was asked in the United States, where just over half (54%) favor lower taxes, even if that means fewer services; 42% want higher taxes and more services. There are huge partisan differences on this issue in the U.S., with 71% of Republicans and 60% of independents preferring lower taxes and fewer government services, compared with only 34% of Democrats. 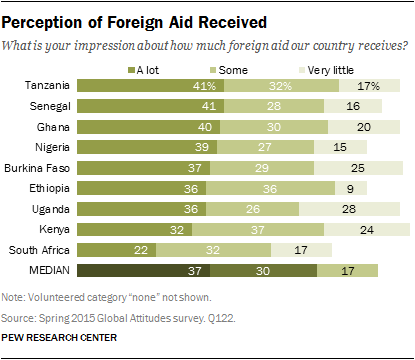 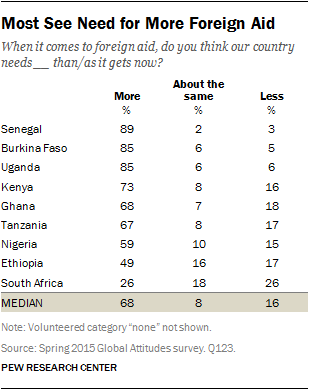 The percentage saying their country gets a lot of aid is fairly consistent across nations, with between 36% and 41% expressing this view in seven of nine countries. Slightly fewer in Kenya (32%) hold this opinion. Meanwhile, South Africans are significantly less likely to say their country receives a great deal of assistance from abroad. (For more on how much foreign aid countries receive and how they have performed since 2000 on the Millennium Development Goals, see the African Development Bank Group.)

There is a clear desire for more aid in the nations surveyed. Majorities in seven nations believe their country needs more foreign assistance than it currently receives, including more than eight-in-ten in Senegal, Burkina Faso and Uganda. Nearly half in Ethiopia (49%) think their country needs to get more aid. 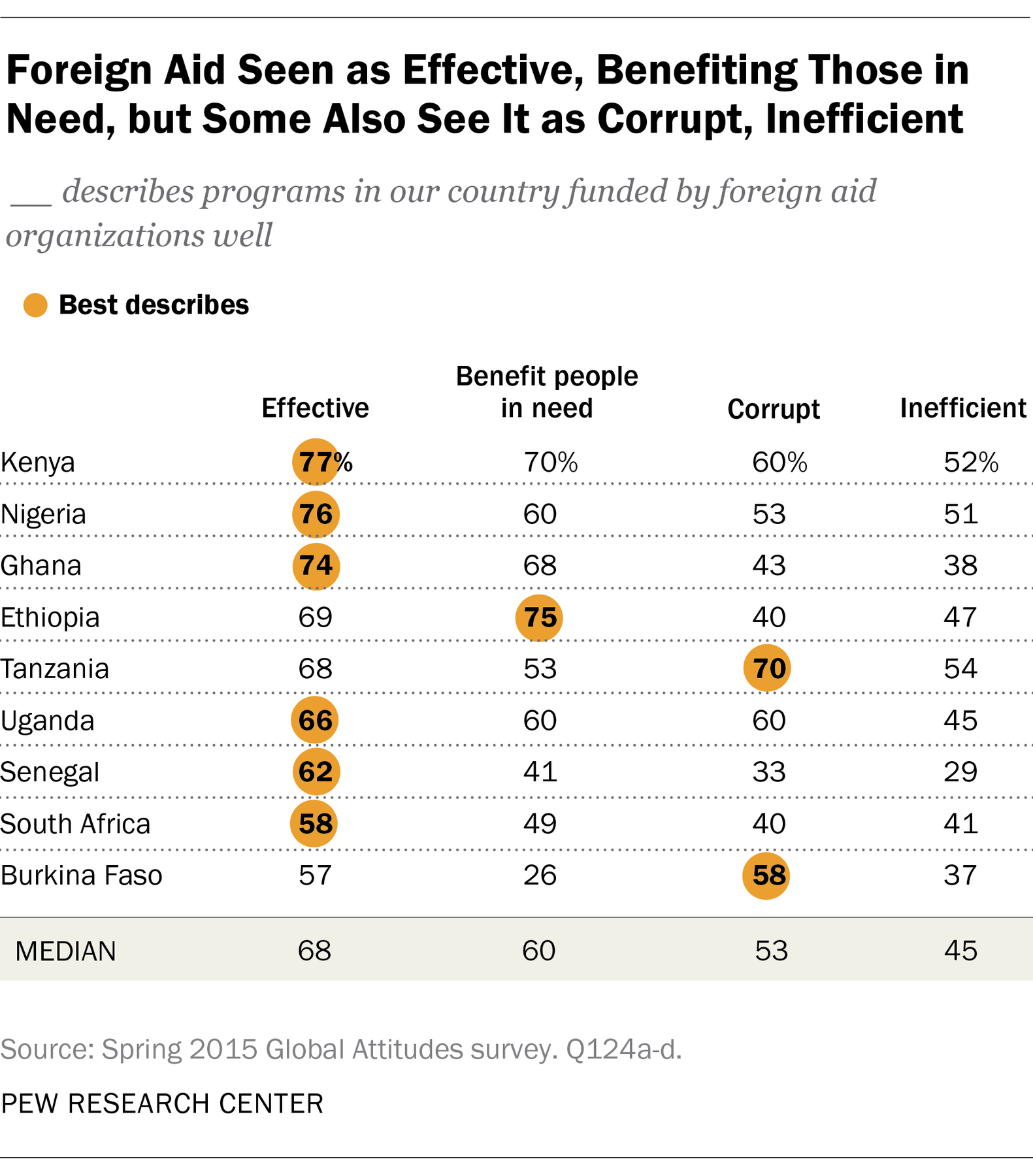 Foreign aid programs get mostly positive ratings for effectiveness across the countries surveyed. In all nine nations, a majority believes the term “effective” describes foreign aid programs in their country very or somewhat well. In Kenya, Nigeria and Ghana, more than seven-in-ten hold this opinion.

In six of nine countries, people associate the phrase “benefit people in need” with foreign aid programs. Seven-in-ten or more express this view in Ethiopia and Kenya. However, just 41% of Senegalese and 26% of Burkinabe say the same.

While large numbers believe international assistance is effective and that it helps those who need it most, many also think these programs are hampered by corruption. Majorities in Tanzania, Uganda, Kenya and Burkina Faso say the term “corrupt” describes aid programs in their country well.

To a lesser extent, those surveyed associate the term “inefficient” with foreign assistance. Half or more say this in Tanzania, Kenya and Nigeria.

Foreign Extractive Companies Seen as Having Positive Impact, but Many Worry about Environmental Toll 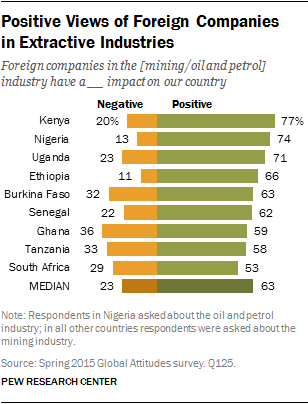 Overall, people believe foreign companies involved in extractive industries are having a positive impact on their countries. Over half in each country polled say these companies are having a favorable impact, including about seven-in-ten or more in Kenya, Nigeria and Uganda. (In Nigeria, respondents were asked about the oil and petrol industry; elsewhere, respondents were asked about the mining industry.)

In general, people who live in regions of the country where extractive industries are concentrated tend to be more positive toward foreign extractive companies. For example, South Africans who live in the northeast are the most likely to say these companies are having a good influence on their country. In Nigeria, people in the southeast are among the most positive.

However, even though they are seen as a good influence overall, people believe foreign extractive companies are having both positive and negative effects on their countries. Across the nine nations polled, a median of 67% say the phrase “provide jobs for local workers” describes foreign companies involved in extractive industries very or somewhat well, with majorities in all nine countries expressing this view. Kenyans, Ugandans and Ethiopians are especially likely to think these companies provide jobs. 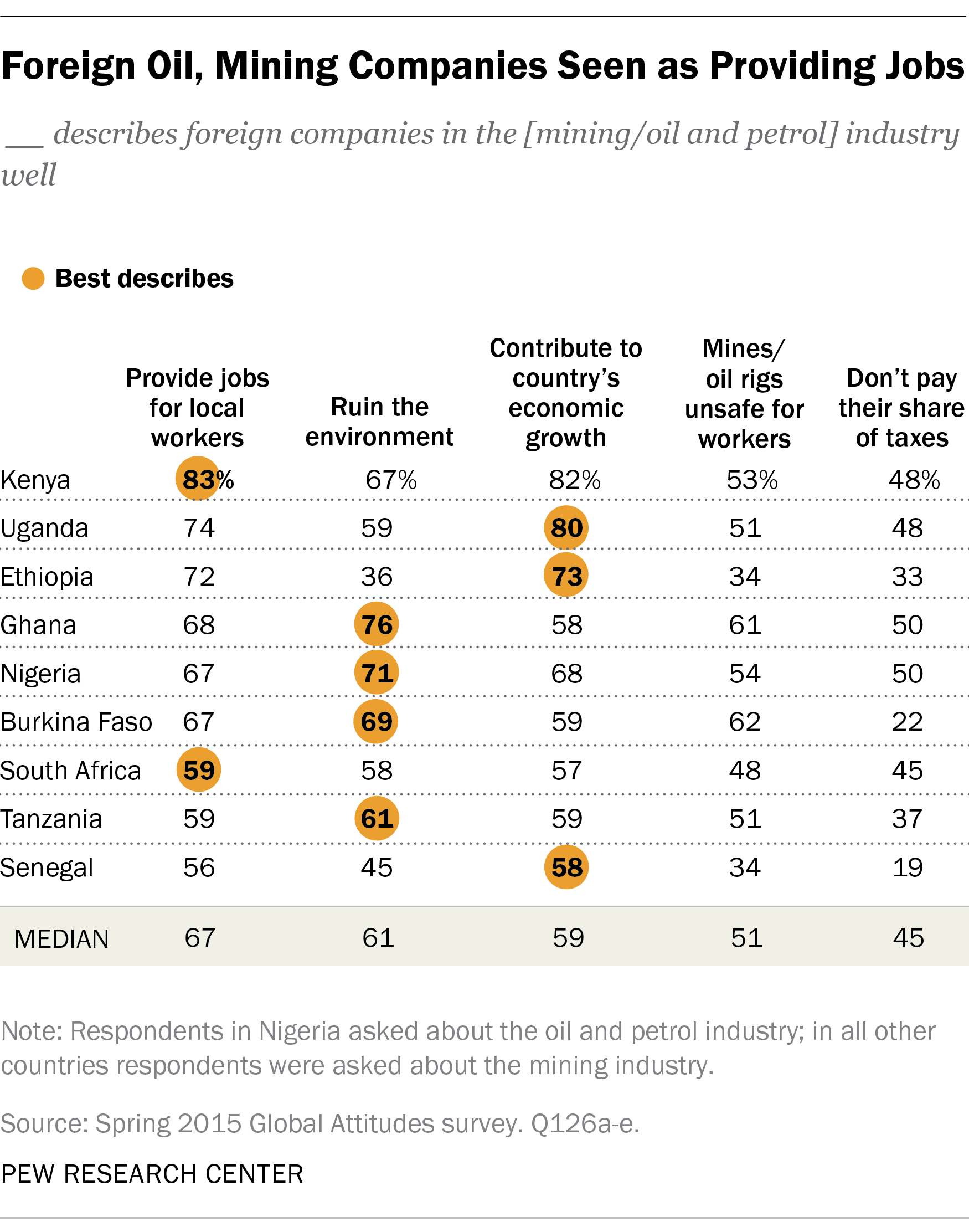 Similarly, majorities in all nine nations believe foreign extractive companies contribute to economic growth (median of 59%). Again, Kenyans, Ugandans and Ethiopians stand out for their positive views on this measure.

At the same time, people also see negative side effects. A median of 61% say the phrase “they ruin the environment” describes foreign companies engaged in extractive industries very or somewhat well, including 76% of Ghanaians and 71% of Nigerians.

Fewer say these companies’ mines and oil rigs are unsafe for workers (median of 51%). Still, half or more hold this opinion in Burkina Faso, Ghana, Nigeria, Kenya, Tanzania and Uganda. A median of just 45% believe the phrase “they don’t pay their share of taxes” describes foreign extractive companies well, and there is no country in which a majority voices this view, although in several nations a relatively large share of the public does express an opinion on this question.