To explore the relationship between demographics and political participation, we estimated a weighted, Poisson mixed-effects model with random intercepts by country and robust standard errors using the Stata program gllamm for estimating generalized linear latent and mixed models. Alongside this pooled model, we evaluated the robustness of the results by estimating the models for each country separately. These country-specific models yielded similar conclusions. 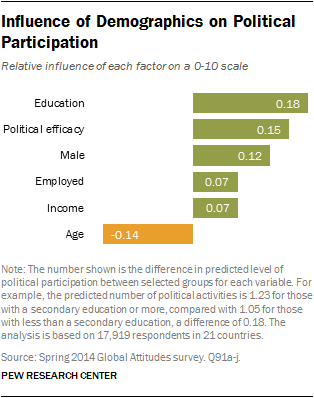 The demographic analysis of political participation comprises a sub-sample (countries=21, n=17,919) of the 32 nations asked the questions, excluding countries without results for all items in the participation scale and countries in which 20% or more of the sample answered “Don’t know” or “Refused” when asked their household income.1

The independent or predictor variables for education, gender, employment and income were recoded as dummy variables, where 1 means secondary education or higher, male, employed and income at or above the approximate median. Political efficacy is coded where 1 means the respondent says government officials care what people think, -1 means officials do not care and 0 means neither care nor do not care. Age is treated as a continuous variable, ranging from 18 to 97. All independent variables are significant at the p < .05 level.

The graphic above shows the difference in predicted values for the following groups:

Hungarians differ in their evaluations of democracy under Orban’s leadership

5 key takeaways about political engagement in emerging and developing nations