To explore the relationship between demographics, satisfaction with specific aspects of life and overall life satisfaction, we used a statistical technique called multivariate regression, which allowed us to test the individual impact of a number of factors on life satisfaction while holding other variables constant. We ran a multilevel, mixed effects, multivariate regression on all countries pooled (see here for full results), but found similar results when estimating the regression in each country separately. We analyzed two models: one that includes demographics only and one that includes satisfaction with various aspects of life and demographics.

Overall, we find that economic factors, including income, number of key household goods and satisfaction with standard of living, have the biggest impact on individual happiness. Education, gender, marital status and employment as well as satisfaction with family, friends and health also matter, though to a lesser degree. 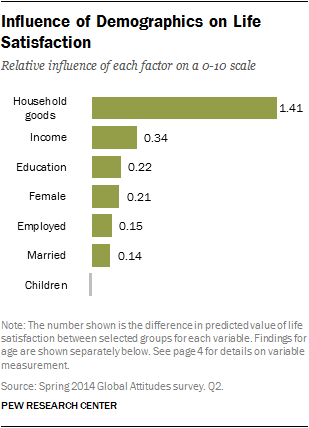 In our first model with just demographics, we find that the number of key household goods a person owns from a list of nine items has the greatest influence on individual life satisfaction. The survey asked respondents whether their household had in working order each of the following nine items – television, refrigerator, washing machine, microwave oven, computer, car, bicycle, motorcycle/scooter and radio. A person who owns none of the nine household items has a predicted overall life satisfaction of 5.55 points on a 0-10 scale. A person who reports owning all nine items has a predicted satisfaction of 6.96, a difference of 1.41 points. In addition to possessions, income (+0.34 points), education (+0.22), and being a woman (+0.21), employed (+0.15) or married (+0.14) all have a significant, positive impact on happiness (see page 4 for details on variable measurement). Having children under the age of eighteen living at home does not significantly impact life satisfaction. 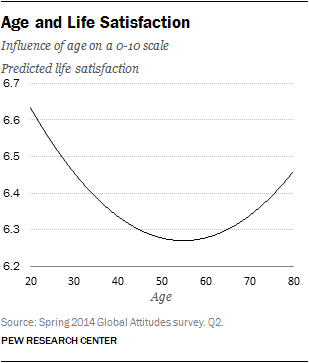 Age also has a significant influence on happiness, controlling for other demographics. As people approach middle age, they are less content with their lives than younger individuals, hitting their lowest point in their 50s, with a predicted level of satisfaction of 6.28 for a decrease of 0.36 relative to a 20 year old. As they reach 75, predicted happiness increases 0.11 points to 6.39. 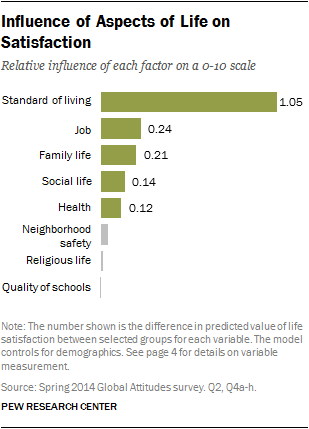 Our second model demonstrates that, alongside demographics, happiness with specific aspects of individuals’ lives influences their overall satisfaction. Economic, rather than personal, factors have the greatest influence on happiness, even when controlling for individual finances. A person who rates their standard of living low on a 0-10 scale (at the global 25th percentile) has a predicted overall life satisfaction of 5.79. An individual who is highly satisfied with their standard of living (at the global 75th percentile) has a predicted life satisfaction of 6.84 – a difference of 1.05 points. Satisfaction with their job (+0.24), family life (+0.21), social life (+0.14) and health (+0.12) also has a positive – though smaller – impact on overall well-being.

Happiness with neighborhood safety, religious life and local schools does not have a statistically significant effect on individual happiness. When accounting for satisfaction with aspects of life, most demographic characteristics remain significant, including income and possessions. Marital and employment status, however, are no longer key predictors of satisfaction. 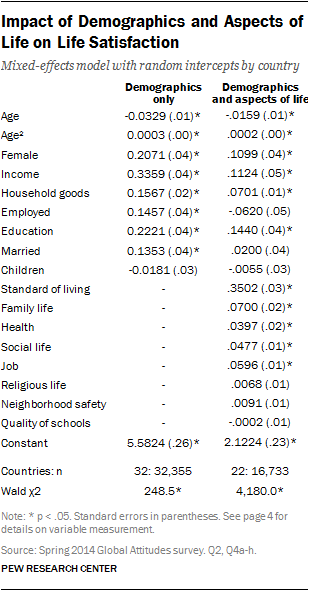 The results reported are based on a weighted, linear mixed-effects model with random intercepts by country and standard errors clustered by country. In addition to the mixed-effects model, we also estimated an ordinary least squares (OLS) regression with country dummy variables, survey weights and clustered standard errors, and an OLS regression with country dummy variables that accounted for the complex survey design of the data. All models provided similar coefficients and significance tests, though the standard errors in the approach we ultimately used were generally the most conservative. Alongside these pooled models, we evaluated the robustness of the results by estimating the models for each country separately. These country-specific models yielded similar conclusions.

The dependent variable is life satisfaction, measured on an 11-point scale. Respondents are asked to place themselves on a ladder, where the top of the ladder (10) represents the best possible life for them and the bottom represents the worst possible life (0). For this analysis, the ladder variable is treated as continuous and people who responded “Don’t know” or “Refused” are excluded.

We use two sets of independent or predictor variables: demographics and satisfaction with various areas of life. We include basic demographic variables known to impact life satisfaction and happiness – age and gender (Argyle 2003; Graham 2009), financial resources (Dolan et al 2008; Easterlin 1974, 2003), education (Graham 2009) and marriage and children (Glenn and Weaver 1979; Nomaguchi and Milkie 2003). All variables are self-reported with the exception of gender and are coded as follows:

Satisfaction with areas of life: Respondents were asked to rate their level of satisfaction, where 0 means very dissatisfied and 10 means very satisfied, with each of the following areas of their lives: standard of living, family life, health, social life, present job, religious life, neighborhood safety and quality of local schools.

Dolan, Paul, Tessa Peasgood and Mathew White. “Do we really know what makes us happy? A review of the economic literature on the factors associated with subjective well-being.” Journal of Economic Psychology 29.1 (2008): 94-122.

Easterlin, Richard A. “Does economic growth improve the human lot? Some empirical evidence.” Nations and Households in Economic Growth 89 (1974): 89-125.