As Brazil prepares to host its second World Cup, at least half of those surveyed in 24 of 37 countries have a favorable view of the South American nation. Views of Brazil are particularly positive in Latin America and Asia, although in many countries a fair share of people offer no opinion. Brazil gets especially high ratings among young people in many nations around the world. However, Brazil receives low marks in some major Middle Eastern nations.

These are the findings of a new survey by the Pew Research Center conducted in 37 countries among 41,408 respondents from March 17 to May 23, 2014. In total, a median of 54% across the 37 countries have a favorable view of Brazil. Meanwhile, 76% of Brazilians say their country should be more respected around the world than it currently is. (For more on the views of Brazilians about their place in the world, the 2013 protests, attitudes toward their economy and opinions on the World Cup, see Brazilian Discontent Ahead of World Cup, released June 3, 2014).

Brazil receives its highest rating from Chile, where 74% say they have a favorable opinion. In both Venezuela and Peru, about two-thirds have a positive view of Brazil. Elsewhere in Latin America, majorities in Nicaragua (59%), Colombia (56%) and Argentina (56%) have positive impressions of Brazil. However, in 2013, three-quarters of Argentines had a favorable view of their eastern neighbor.

In El Salvador (44%) and Mexico (41%), less than half see Brazil favorably, with many respondents not offering an opinion. In Mexico, favorable opinions are down 17 percentage points since 2002, when 58% had a positive view of Brazil.

In the U.S., about half (51%) hold a positive view of Brazil, with around a quarter (26%) seeing the country negatively, and the rest offering no opinion. 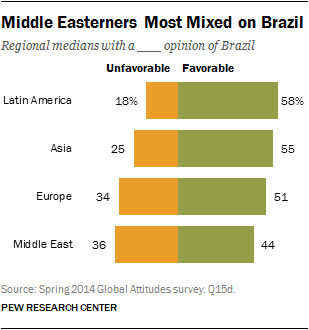 Opinions are decidedly mixed in the Middle East, with more than half in Israel (59%) and Lebanon (54%) expressing favorable feelings toward Brazil. But in Egypt, Jordan and Turkey, strong majorities express unfavorable views of Latin America’s most populous country. (For more on Middle Eastern views of other countries, such as the United States, China and the EU, see the Global Indicators Database).

In most Asian countries surveyed, the public sees Brazil in a positive light. This includes majorities in South Korea (63%), Japan (61%), Vietnam (59%), the Philippines (57%) and Bangladesh (55%). Opinions are also on balance favorable in Indonesia and Malaysia. Only in China, which is Brazil’s top trading partner, are opinions split (43% favorable, 41% unfavorable). In India and Pakistan, most do not offer an opinion on Brazil. 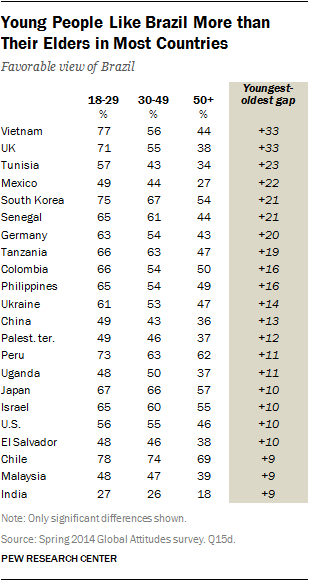 African nations, which Brazil has increasingly turned to as trade partners, are generally favorable towards Brazil, although many do not offer opinions. Among the African countries surveyed, Brazil is seen most favorably in Tanzania (61%) and Senegal (59%).

Brazil Popular with the Young

In 22 of the 37 countries, young people ages 18-29 years-old are significantly more inclined to have a favorable view of Brazil than are people ages 50 and older.

Infographic: Positive Ratings for Brazil across Much of the Globe Spring 2014 Global Attitudes Dataset

On Eve of World Cup, Brazil Well-Regarded in Much of the World
Brazil Popular with the Young
Methods in Detail