Across the globe, few are happy with the direction of their country – less than half in 34 of the 39 countries surveyed say things are going well. Satisfaction is particularly low in advanced and developing economies, while publics in emerging markets tend to be somewhat more content.

Among the advanced economies, only in Germany (57%) and Canada (55%) do more than half of those surveyed say their country is moving in the right direction. In most countries, a third or fewer are satisfied with their nation’s path, including just 5% of the Spanish, 3% of Italians and 2% of Greeks.

Similarly, roughly four-in-ten or fewer in most of the developing economies surveyed say things are going well in their countries. Tunisians (13% satisfied), Palestinians (12%), Nigerians (12%), Lebanese (11%) and Pakistanis (8%) are particularly disappointed.

Overall, country satisfaction is somewhat higher in the emerging markets – at least three-in-ten in most countries say their nation is on the right track. Nonetheless, even among this group, few publics give positive reviews of how things are going in their country. The Chinese (85%) and Malaysians (82%) stand out as particularly satisfied, but nowhere else does a clear majority say their country is moving in the right direction.

Publics around the world are also unhappy with the current economic situation in their nations. Fewer than half in 27 of the 39 countries surveyed say their economy is doing well. People in advanced economies are very dissatisfied with the economic performance of their nation, particularly in European countries as well as Japan and South Korea. Germans, Canadians and Australians, meanwhile, stand out as especially satisfied, with two-thirds or more saying things are going well.

Among the developing economies surveyed, economic attitudes are also grim. Things look particularly bleak in the Middle East, including Egypt (23% good), the Palestinian territories (22%), Tunisia (11%) and Lebanon (10%). Only in the Philippines (68%), Bolivia (54%) and Kenya (52%) do roughly half or more say the economy is doing well.

Little Hope for the Coming Year

In addition to publics’ relatively grim assessment of current conditions, many across the globe are skeptical that things will improve over the next 12 months. Fewer than half in 28 of the 39 countries surveyed expect the economy will get better in the next year.

Optimism is particularly low in the advanced economies. In every country surveyed in this group, four-in-ten or fewer say the economy will get better in the next year, with the exception of Americans (44%), who are only slightly more optimistic. Europeans continue to stand out as particularly despairing over their economy, with fewer than two-in-ten who say things will improve in Italy (19%), Poland (15%), the Czech Republic (15%), Greece (14%) and France (12%).

Overall, publics in both the developing economies and emerging markets tend to be more optimistic. In the emerging markets, majorities in China (80%), Brazil (79%), Venezuela (64%), Malaysia (64%) and Mexico (56%) say things will get better in the coming months. However, less than a third agree in Argentina (29%) and Russia (24%).

Among the developing economies, many in the African nations surveyed predict conditions will improve, including roughly six-in-ten or more in Senegal (69%), Nigeria (66%), Ghana (60%) and Kenya (59%). Meanwhile, publics in the Middle East tend to be less optimistic, such as the Jordanians (28% improve), Palestinians (27%) and Lebanese (19%).

Jobs and Prices Are Major Problems

Among the four economic issues asked about on the survey – inflation, unemployment, inequality and public debt – a lack of employment opportunities and rising prices emerge as the major problems that concern publics. Two-thirds or more in most countries say these two issues are very big problems. 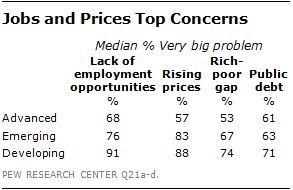 In 11 of the 14 developing economies, more than eight-in-ten say that unemployment is a very big problem. In the emerging markets – despite a higher level of satisfaction with their economic conditions – a median of 76% are very concerned about jobs, including eight-in-ten or more in South Africa (87%), Venezuela (85%), Mexico (82%) and Chile (80%). And unemployment is also a leading worry in the advanced economies (median of 68%), particularly in the European countries of Greece (99%), Italy (97%), Spain (94%) and France (80%).

Inflation is seen as another big challenge around the world, though people in advanced economies tend to be less preoccupied with rising prices. Medians of more than eight-in-ten in the developing economies (88%) and the emerging markets (83%) say rising prices are a very big problem in their country. Among these countries, concern about inflation is expressed by nearly everyone in Pakistan (99%) and Senegal (97%). In advanced economies, a smaller median of 57% are very worried about rising prices, but concern is particularly high in Greece (94%), Italy (84%), Israel (70%), Spain (69%) and France (68%).

In most countries, people are somewhat less worried about economic inequality and public debt. Nonetheless, at least two-thirds in 18 of the 39 countries say the gap between the rich and the poor is a very big problem. Lebanese (86%), Pakistanis (85%), Greeks (84%), Tunisians (82%) and Ghanaians (81%) are especially concerned about inequality. Similarly, two-thirds or more in 18 countries say public debt is a top challenge for their nation. In particular, publics in Greece (92%), Lebanon (89%), Italy (84%), Pakistan (82%) and the Philippines (81%) are very worried about public debt.

When asked which of the four issues – inflation, unemployment, inequality or debt – the government should address first, nearly every public surveyed says jobs or rising prices.

Among the advanced economies, dealing with unemployment is the top priority in almost every country. Roughly six-in-ten or more agree this should be the government’s main focus in Spain, Italy, the Czech Republic and Poland. The two exceptions to this pattern are Israel, where more people want their government to focus on inflation, and Germany, where the top priority is inequality.

Similarly, many publics in the developing economies prioritize addressing the issue of jobs. In nine of the 14 countries surveyed, at least four-in-ten say unemployment should be the government’s first concern. However, inflation rises to a top priority for Pakistanis, Tunisians and Jordanians.

Attitudes are more divided among the emerging markets. In four of the 11 nations surveyed, pluralities place more of a priority on unemployment. The issue of rising prices tops the list in another four countries. And in the remaining three countries, opinion is split.

Data: Many in Developing Nations Struggle to Afford Food

Global Econ Quiz: Test how much you know about economic attitudes in the world Spring 2013 Survey Data Dataset