The euro crisis first undermined France’s economy, and now there is strong evidence that it has severely eroded French public attitudes toward the economy, the European project and the country’s domestic leadership. Moreover, France has always bridged Europe’s north and south. French language and culture has Latin roots, but France has historically been considered in the same economic and political league as Germany and Britain. And in their public attitudes, the French were neither Northerners nor Southerners, but a hybrid of the two. Now, measured by a number of indicators, the French look less like Germans and a lot more like the Spanish, the Italians and the Greeks.

So, in recent years the French have not had much reason to feel good about their economy. In the current poll such sentiment reaches a new low, with just 9% saying the economy is performing well. And that judgment is down 21 points since 2007. Only 11% of the French think their economy will improve over the next 12 months, making the French among the most pessimistic of Europeans. And just 9% think their children will be better off financially than their parents, by far the gloomiest forecast for the next generation.

The economic downturn over the past six years has also sharply increased the portion of the French population suffering basic deprivation. And reported incidences of not having enough money to pay for food and health care over the past year have increased more in France since 2007 than in any other of the EU countries surveyed.

The French have long had their doubts about whether European economic integration has been good for the French economy. In 1991, the year before creation of the single European market, a plurality of 44% feared that integration would weaken France. Today, these doubts have morphed into strong convictions. Nearly three-quarters (77%) of the French think closer business ties with the rest of Europe have undermined their overall economy.

Despite such doubts, the French have generally supported the European Union. In 2004, 69% had a positive opinion about the Brussels-based institution. But by 2013, just 41% have a favorable view. Moreover, more than half (53%) of the French oppose giving more decision-making power to Brussels. And only 40% would consider financial assistance to other EU nations facing economic distress, down from 53% in 2010. Nevertheless, 63% of the French want to keep the euro and not go back to the franc. 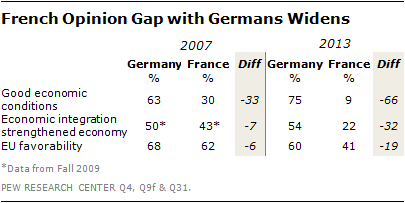 The French mood has soured sharply in absolute terms but it has also worsened relative to the sentiment of the Germans, their European partner.

In 2007, 30% of the French and 63% of the Germans thought their national economies were doing well. That was certainly not a similar sentiment. Yet, since then, public attitudes on each side of the Rhine have gone in opposite directions. That 33-point difference six years ago is now a 66-point difference, as just 9% of the French and 75% of Germans see their economy as good.

Moreover, the French and the Germans differ so greatly over the challenges facing their economies that they look as if they live on different continents, not within a single European market. Fully 80% of the French say unemployment is a very big problem; less than a third (28%) of the Germans agree. About two-thirds (68%) of the French think inflation is a major issue, while just 31% of Germans are similarly worried about rising prices. And 71% of the French are very troubled about public debt; only 37% of the Germans share such intensity of concern. 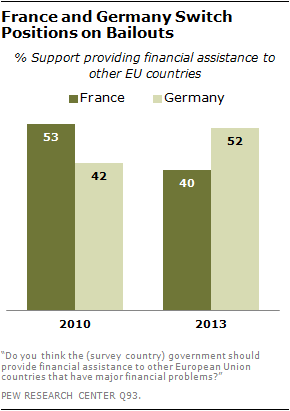 The French and the Germans also disagree on whether to help out other European Union nations in distress. And their positions have flip-flopped. In 2010, roughly half (53%) the French backed bailouts, while only 42% of Germans agreed. Today, about half (52%) of the Germans support such financial assistance, while just 40% of the French do so.

However, the French and Germans do roughly see eye-to-eye on whether the European Union should be given more power to deal with the euro crisis. About half of Germans (51%) and French (47%) are willing to grant more authority to Brussels. And both would like to keep the euro.

The darkening mood in France makes French public opinion look less like that in Germany and more like attitudes in southern Europe: Spain, Italy and Greece.

More than nine-in-ten Spanish, Italians and Greeks think their economy is doing poorly, as do roughly nine-in-ten French. About two-thirds or more in all four countries think their governmental leader has done a bad job handling the economic crisis. Nearly three-quarters of the French, Greeks and Italians believe that economic integration has been bad for their country. More than half of the French, Spanish and Greeks look unfavorably on the EU. And by all of these indicators, French attitudes have worsened dramatically since 2007, much as has sentiment in Spain and Italy, for which there are comparable data.