China’s alleged cyber-espionage campaigns against other governments, major corporations and, most recently, the media, have increasingly become a focus of U.S. officials and news reports. In the superpower competition between the U.S. and China, most American experts surveyed in 2012 by the Pew Research Center ranked cyber attacks from China as a more serious problem than the economic or military challenges it poses.

The Washington Post reported on Monday that a National Intelligence Estimate — the consensus view of the U.S. intelligence community — identifies China as the country with the most aggressive campaign to obtain information from American businesses and institutions in an effort to gain an economic advantage.

Chinese hackers were also said to have infiltrated the New York Times computer system over a four month period, an effort that coincided with the Times’ reports on the financial holdings of the family of China’s Prime Minister Wen Jiabao. The Post and the Wall Street Journal reported similar attacks from China on their computer system. 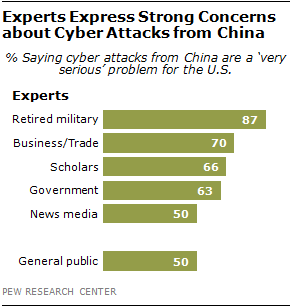 In the Pew Research survey conducted last spring in collaboration with the Carnegie Endowment for International Peace and the Kissinger Institute,1 half of the general public cited cyber attacks from China as a very serious problem. They ranked three issues as more worrisome: the amount of American debt held by China (78% very serious problem), followed by loss of jobs to China (71%) and the trade deficit with China (61%).

But China’s cyber capabilities were at the top of the list of challenges described as a very serious problem for the U.S. by the five expert groups surveyed: government officials, retired U.S. military officers, scholars, business and trade leaders, and members of the news media. Of 11 issues tested among elites, only cyber attacks from China were considered a very serious problem by at least half across all five groups.

The challenges regarded by the general public as the most serious were deemed less important by all the expert groups. China-held U.S. debt — the public’s top concern — was viewed as a very serious problem by 48% of the retired military and 42% of business and trade leaders, but only about one-in-five government officials and scholars.

Loss of U.S. jobs to China, the public’s second biggest concern, was viewed as very serious by 23% or fewer of all the expert groups. The public’s third top concern — the trade deficit — was shared by 37% or less of each of the five expert groups.