Changing Global Perceptions of the U.S. in the Post-Sept. 11 Era

In the decade since the Sept. 11 attacks, America’s global image has followed a remarkable, if now familiar, trajectory. Initially, there was a global outpouring of sympathy for the United States, but it was short-lived. As the Bush Administration pivoted from Afghanistan to Iraq, and as American anti-terrorism efforts expanded, many around the world turned against the U.S. Widespread anti-Americanism remained a key feature of international public opinion throughout the Bush years, before fading significantly following the election of Barack Obama.

However, at the same time as ratings for the U.S. were waning and waxing, other changes in perceptions of America and its role in the world were also evident. In particular, views about American power have changed over the course of the decade, as economic issues have trumped security concerns. Early in the post-Sept. 11 era, the projection of American military strength led to pervasive fears of an unleashed, and unchecked, hyperpower. More recently, however, the global financial crisis has turned the spotlight to America’s declining economic prowess. Once the fearsome colossus, many now see the financially-strapped U.S. as a great power in decline.

The Bush Era and Fears of U.S. Power

Nearly a decade ago, as the U.S. began utilizing its considerable military and intelligence resources in the wake of Sept. 11, global publics began to register their concerns about the reach of American power. The first Pew Global Attitudes survey, conducted in 2002, found that less than a year after the attacks, goodwill toward the U.S. was already beginning to ebb in many nations, including some of America’s closest allies. For instance, the percentage of Germans with a favorable view of the U.S. fell from 78% in 2000 to 60% in 2002, and in Britain it dropped from 83% to 75%.

With the onset of the Iraq war in 2003, anti-Americanism surged across much of the globe. Ratings plummeted further in Western Europe, and negative attitudes toward the U.S. became common in parts of the Muslim world where previously America had been relatively well-regarded, such as Turkey and Indonesia.

Opinions about the U.S. remained largely negative throughout the Bush years, as publics around the world expressed serious concerns about American policies and the use of American power. The wars in Iraq and Afghanistan were consistently unpopular, and more broadly, U.S. anti-terrorism efforts were viewed with skepticism and fear.

Immediately following the attacks of Sept. 11, the “war on terror” received strong support in Western Europe, but as U.S. anti-terrorism efforts increasingly became associated with Iraq, Abu Ghraib, Guantanamo, and other unpopular aspects of American foreign policy, support plummeted. By 2007, only about four-in-ten in France, Germany and Britain favored U.S.-led efforts to fight terrorism, and just 21% held this view in Spain. 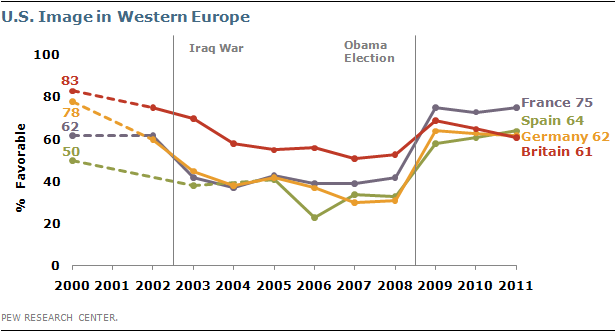 In most predominantly Muslim nations, the war on terror was viewed negatively from the outset. For instance, a 2004 Global Attitudes poll found majorities in Morocco, Turkey, Pakistan, and Jordan saying they opposed U.S. anti-terrorism efforts and that the U.S. was overreacting to the threat of international terrorism. Moreover, most of those surveyed in these four nations did not think the war on terrorism was a sincere effort. Combating violent extremism may have been the stated goal of U.S. policy, but many respondents felt this was a smokescreen to hide the real objectives, such as gaining control of Middle Eastern oil, targeting unfriendly Muslim governments, protecting Israel, and dominating the world.

For America’s global image, 2008 was a pivotal year for two reasons. First, the election of Barack Obama led to dramatically higher ratings for the U.S. in many nations. This was especially true in Western Europe, where the new president received astronomical ratings – in 2009 for example, 93% of Germans expressed confidence in Obama’s leadership, as did 91% in France.

But the improvement was not limited to Western Europe. Obama was seen much more positively than his predecessor in the Americas, Africa, and Asia as well, and ratings for the U.S. rose significantly in nations such as Mexico, Argentina, Canada, Nigeria, and Japan.

The 2010 and 2011 Pew surveys showed that the Obama bounce had staying power, as views toward the U.S. and Obama remained mostly positive across much of the world. Sill, reservations about American foreign policy did not disappear. For instance, Obama received fairly low marks for the way he has handled specific issues such as Iran, Afghanistan, and the Israeli-Palestinian conflict.

Moreover, while America’s image has rebounded in much of the world, there has been no Obama bounce in several predominantly Muslim nations that are central to U.S. strategic interests. Fewer than one-in-five Turks, Pakistanis, Jordanians, or Palestinians offered a favorable opinion of the U.S. in the 2011 Global Attitudes poll. In these nations, many of the contentious issues from the Bush era – Afghanistan, anti-terrorism efforts, U.S. policy toward Israel – continue to drive anti-American sentiments.

The second watershed event of 2008 was the onset of the global financial crisis. The economic downturn did not necessarily lead people to have a more or less positive opinion of the U.S., but it did lead many to reassess their view of American power – especially American power relative to China’s. As the U.S. economy has struggled over the last few years, China has continued its historic growth, and increasingly Beijing has taken a more assertive approach to international affairs. These shifting dynamics are clearly reflected in global public opinion, and there is a widespread perception that China will supplant the U.S. as the dominant global superpower. 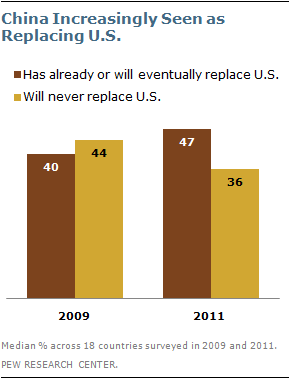 Looking specifically at economic power, many believe China has already assumed the top spot. In the 2011 poll, pluralities in Britain, France, Germany and Spain named China – not the U.S. – as the world’s leading economic power. Remarkably, a 43% plurality of Americans also named China; just 38% said the U.S.

Views about the impact of China’s growing economy are mixed. In Western Europe, the British and Spanish tend to see it positively, while the French and Germans see it in a negative light. Among China’s neighbors, Pakistanis and Japanese think China’s economic growth is good for their countries, while Indians tend to say it is not good for India.

Few, however, see China’s growing military strength as a positive development, and there is little enthusiasm for China becoming as militarily powerful as the U.S. There are a few exceptions – most Pakistanis, Jordanians and Palestinians would like China to rival the U.S. – but majorities in most of the nations surveyed in 2011 said it would be bad if China were to reach military parity with the U.S.

This view is especially common among many of America’s longtime allies, including overwhelming majorities in Germany, France, Spain, Britain and Japan. Even in Turkey – a longtime NATO ally, but also a nation where anti-Americanism has been rampant in recent years – only 20% want to see the Chinese military on a par with the U.S.

Thus in many nations where fears of American power have been so pervasive in the decade since Sept. 11, there are now concerns about the relative decline of American power. Initially, the exercise of U.S. military strength in Iraq and Afghanistan, coupled with the perception that the U.S. disregards the interests of other countries, led to a backlash against American power. But today, the rise of China and the uncertainty surrounding global economic leadership are creating new anxieties about a world where, many believe, American power is weakening.