The survey also finds that opinions of NATO are mixed in Eastern Europe, as are attitudes about the political changes the former communist countries have undergone since the fall of the Berlin Wall and the collapse of the former Soviet Union. The European Union, on the other hand, is generally well regarded in both Eastern and Western Europe. 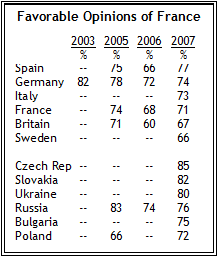 Impressions of France are widely favorable throughout the region. In fact, positive views of France have rebounded in the publics of two key allies after declining in 2006. In Spain, favorable views of France are up 11 points in the past year, with 77% expressing that view today. Favorability there had declined from 75% to 66% between 2005 and 2006. Similarly, two-thirds (67%) of the British now express a favorable opinion of France, compared with six-in-ten (60%) in last year’s poll.

In fact, the French themselves are the most critical of their country. While 71% express a favorable opinion of their own country, 29% give an unfavorable rating – the highest negative rating across the 12 European nations surveyed.

Germans Feel Better about Their Country 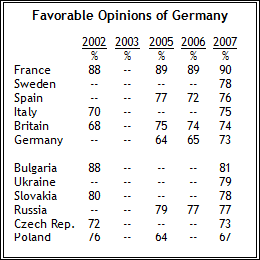 Germany continues to be rated favorably by large majorities across Europe. In Eastern Europe, more than eight-in-ten (81%) in Bulgaria and nearly as many in the Ukraine (79%), Slovakia (78%), and Russia (77%) express positive opinions about Germany. Germany is viewed slightly less favorably in neighboring Poland and the Czech Republic, but solid majorities in those countries – two-thirds in Poland (67%) and nearly three-quarters (73%) in the Czech Republic – express positive views.

Western European publics also rate Germany highly. More than seven-in-ten in Sweden (78%), Spain (76%), Italy (75%), and Britain (74%) have a favorable opinion of Germany. But nowhere is Germany’s image more positive than in neighboring France, where 90% say they have a favorable opinion of that country. In this regard, considerably more French residents feel favorably toward Germany than toward their own nation (71%).

Views of Germany are generally stable in countries for which trends are available, but the nation’s image has improved notably in the last year among Germans themselves. Favorable ratings today stand at 73% in Germany, up from just 65% a year ago. Still, as with the French, the Germans tend to be their own greatest critics. More than a quarter (27%) of Germans feel unfavorably toward their country, a higher percentage than in any other European nation surveyed.

Great Britain Popular among Its Neighbors 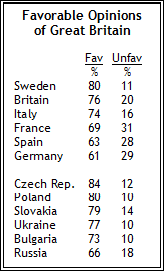 Like France and Germany, Great Britain also receives overwhelmingly positive ratings across the region. This is particularly true in East Europe, where 84% in the Czech Republic express a positive view of Britain, as do 80% in Poland, 79% in Slovakia, and 77% in the Ukraine. Views are also overwhelmingly favorable in Sweden. In this regard, the Swedes give far more favorable marks to Great Britain (80% favorable) and Germany (78%) than they give to France (66%).

Britain receives its lowest ratings in Germany (61%) and Spain (63%). And while favorable views predominate in all three nations, roughly three in ten French (31%), German (29%) and Spanish (28%) respondents give negative marks to Britain. This is considerably higher than the number of British respondents who express unfavorable opinions of Germany (12%) or France (22%). 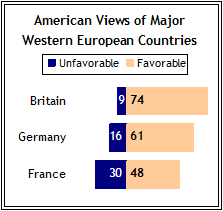 Attitudes toward Germany and Great Britain are also positive in the United States. But Americans continue to express considerably less favorable views of France than do Europeans. Nearly three-quarters of Americans (74%) have a positive opinion of Britain and 61% have a favorable opinion of Germany. By contrast, fewer than half of Americans (48%) rate France favorably. After a shifting upward in recent years, American ratings of France and Germany have slipped slightly in this year’s update. Ratings of France are down four-points from 52% a year ago, and ratings of Germany have slipped five-points from 66%.

Americans’ views of France vary significantly between Democrats and Republicans. A majority of Democrats (55%) have a favorable opinion of France, while 22% feel unfavorably. Among Republicans, however, the balance of opinion is negative: 37% have a positive impression of France, compared with 45% who have a negative impression. Independents are closer to Democrats in their attitudes toward France; 52% have a favorable opinion, with 30% unfavorable.

Both Republicans and Democrats now express much more favorable views of France than they did at the onset of the Iraq war, which the French government opposed. In 2003, nearly three-quarters of Republicans (74%) rated France negatively. Democrats’ views were more mixed, but half had an unfavorable opinion of France.

Views of NATO and the EU 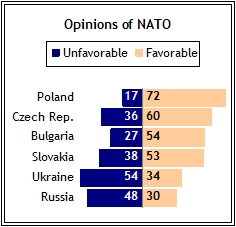 Nearly a decade after the first former communist countries joined NATO, views of that institution are mixed in Eastern Europe. A large proportion in the Czech Republic (60%) and even more in Poland (72%), the first countries in the region to join the organization in 1999, express favorable views of NATO. But in Bulgaria and Slovakia, which have joined more recently, the organization receives positive ratings by narrower majorities – 54% in Bulgaria and 53% in Slovakia say they have a favorable opinion. And publics in the former Soviet republics of Russia and Ukraine, which are not NATO members, express negative views of the body. More than half in Ukraine (54%) and a plurality in Russia (48%) have an unfavorable opinion while just 34% and 30%, respectively, have a positive view of NATO.

The European Union fares better than NATO among Eastern European publics. Majorities in the six countries surveyed in the region have a positive view of the EU. In Bulgaria, which became a member of the EU this year, fully 81% rate the organization favorably. Similar proportions in Slovakia (79%) and Poland (83%) share that view. Views of the EU are more mixed but still positive in the Czech Republic, where 54% express a favorable opinion and 44% have unfavorable views. Unlike NATO, the European Union is popular in the two non-member nations included in the poll – more than six-in-ten in Russia (62%) and nearly eight-in-ten in the Ukraine (77%) have a favorable view of the EU. (For a more detailed analysis of opinions about the EU, see Global Unease with Major World Powers , released June 27).

The European Union is also viewed positively by majorities in all six Western European countries included in the survey. Favorable views are most widespread in Spain (80%) and Italy (78%). Large proportions in Germany (68%), France (62%), and Sweden (59%) also view the EU positively. Attitudes toward the EU are more mixed in Great Britain, however. Slightly more than half (52%) of the British public have a positive opinion while 37% have a negative view of that organization.

Attitudes are mixed in Eastern Europe about the changes that have taken place in their countries since the fall of the Berlin Wall and the collapse of the Soviet Union. Publics in the Czech Republic and in Slovakia have a strongly positive view of the political changes that have taken place since 1989; 73% of Slovaks and 72% of Czechs approve of these changes. Nearly two-thirds in Poland (64%) share this view. 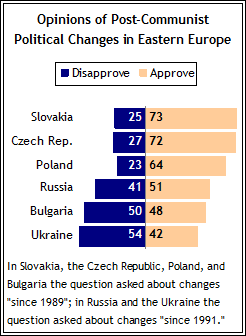 Russian opinion is far more negative; only a slim majority (51%) approves while 41% disapprove of the changes that have taken place in Russia. And reactions are even less favorable in Bulgaria and the Ukraine. Bulgarian opinion is almost evenly divided (48% approve and 50% disapprove), and more than half (54%) in the Ukraine disapprove of the political changes their countries have undergone, while just 42% approve.

In three of six Eastern European countries surveyed, support for post-communist political changes is stronger among men than among women. In the Czech Republic, Slovakia and Ukraine, the percentage of men who approve of the changes is higher than it is among women. For example, Ukrainian men are split: 46% approve and 50% disapprove of the changes in their country. In contrast, nearly six-in-ten (57%) Ukrainian women disapprove of the political changes that have taken place since the collapse of the Soviet Union and just 37% approve.

Attitudes about political changes also vary by age in Poland, Russia and Ukraine. Three-quarters of those ages 18-29 in Poland approve of the changes that have taken place in their country, compared with 65% of 30-49 year-olds and 56% of those ages 50 and older. A solid majority of younger Russians (62%) approve of the changes, compared with 56% of 30-49 year-olds, and just 40% of those ages 50 and older. A similar pattern is evident in Ukraine. 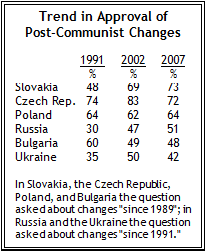 Opinions about post-communist political changes are considerably more positive among Slovaks, Russians, and Ukrainians than they were in 1991. However, approval for the changes has declined somewhat since 2002. In 1991, just 35% of Ukrainians approved of the political changes they were experiencing. By 2002, half felt positively about the changes. But in this year’s poll, 42% in the Ukraine say they approve of the changes their country has undergone since the fall of the Soviet Union.

As in Ukraine, approval in the Czech Republic for changes in the post-Communist era has declined in the last five years, and now stands at 1991 levels. In 2002, 83% approved of the changes that have taken place in their country since the end of communism; currently, 72% approve of these changes, about the same number as in 1991 (74%).

In Bulgaria, the public is considerably less favorable towards the political changes that have taken place in their country than they were in 1991. Today, as in 2002, Bulgarians are divided in their views – 48% approve of the changes and 50% disagree. Bulgarians were more enthusiastic in 1991, two years after the fall of the Berlin Wall,–when six-in-ten approved of the changes.