Perceptions of the conflict between Israel and the Palestinians differ considerably across regions. As in the past, Americans’ strong pro-Israel stance sets them apart from other publics. By more than four-to-one (49%-11%), Americans say they sympathize with Israel rather than Palestinians, a balance that is largely unchanged from past years.

The survey finds a little less support for Israel in Great Britain, France and Germany than in 2006 surveys conducted before Israel’s war with Hezbollah in southern Lebanon. The current survey was conducted in April and May (April 6-May 29), before Hamas took over the Gaza Strip following a violent struggle with Fatah.

In Africa, Israel enjoys substantial support in Ivory Coast, Kenya, Uganda, Ethiopia, and Ghana. Public sympathies tilt towards the Palestinians in the predominantly Muslim countries of Senegal and Mali. In countries with large numbers of both Christians and Muslims, there are differences between the two faiths – in Ethiopia, Tanzania, and Nigeria, Christians tend to side with Israel, while Muslims feel more sympathy for the Palestinians. 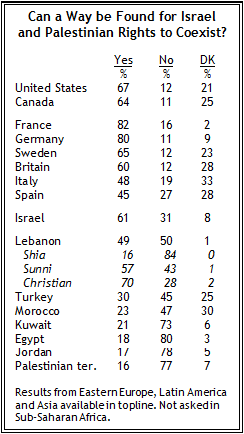 Western publics generally believe that a way can be found for Israel to exist so that the rights and needs of the Palestinians are addressed. The picture is quite different, however, among Muslim publics in the Middle East.

More than seven-in-ten Egyptians, Jordanians, Palestinians, and Kuwaitis believe “the rights and needs of the Palestinian people cannot be taken care of as long as the state of Israel exists.” Lebanese opinion is divided on this issue: Christians tend to believe strongly that coexistence can work, while the Shia community overwhelmingly disagrees. Among Lebanese Sunnis, 57% believe a way can be found for Israel to exist and Palestinian rights be addressed – a far greater percentage than among Sunnis in other countries. 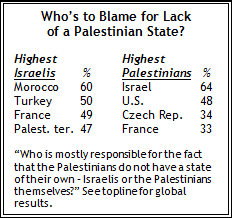 Mixed Reviews for Abbas and Hamas 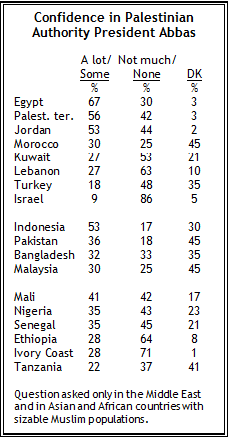 Embattled Palestinian Authority President Mahmoud Abbas draws mixed reactions throughout the Middle East, as well as in other countries with large Muslim populations.1 Solid majorities in three Middle Eastern publics – Egypt, the Palestinian territories and Jordan – say they have a lot of confidence or some confidence in Abbas to do the right thing regarding world affairs. Notably, two-thirds of Egyptians express at least some confidence in Abbas – the highest level of confidence recorded in any of the 18 countries in which this question was asked.

In contrast, critical opinions of Abbas are widely held in Lebanon and Kuwait, where 63% and 53% respectively say they have little or no trust in the Palestinian leader. And in Israel, views of Abbas are overwhelmingly negative: nearly nine-in-ten (86%) say they do not trust him to make foreign policy decisions. (Israelis are only somewhat less critical of their own Prime Minister Ehud Olmert: Nearly two-thirds of Israelis – 64% – say they have little or no confidence in him to do the right thing in foreign affairs.)

Attitudes toward Abbas are equally mixed outside the Middle East, though large minorities in most countries in which the question was asked do not know enough about him to have an opinion. In Indonesia, a slight majority (53%) has confidence in him, while favorable views outnumber negative judgments by two-to-one in Pakistan. Opinions are mixed in Malaysia and Bangladesh.

Views of the militant group Hamas also vary throughout the Middle East. About six-in-ten Palestinians (62%) have a favorable opinion of the organization, as do majorities or pluralities in Jordan and Morocco. Opinions of Hamas are divided in Egypt and Kuwait, and Hamas is viewed negatively in Turkey. The balance of public opinion in Lebanon is against Hamas (67% unfavorable), although the organization is rated favorably by half of the country’s Shia community. Hamas – a Sunni organization – is overwhelmingly unpopular among Lebanese Sunnis.

In largely Muslim countries in Asia, Hamas tends to be popular among those who are able to offer an opinion, while in Africa the opposite is true – most who have an opinion do not like the organization.

In the Palestinian territories, most of those who express a favorable opinion of Hamas also tend to have a positive view of Abbas, who is affiliated with Fatah, a rival Palestinian organization; 52% of Palestinians with a favorable opinion of the militant Islamist organization also express confidence in Abbas to do the right thing in world affairs. Among those with an unfavorable view of Hamas, the president is slightly more popular – 65% express confidence in him.

U.S. Policies in the Region

Throughout the Muslim countries of the Middle East, overwhelming majorities believe U.S. policy in the region favors Israel too much, including more than eight-in-ten respondents in Jordan (91%), the Palestinian territories (90%), Lebanon (89%), Kuwait (86%), Egypt (86%), and Morocco (81%). This belief is widespread in other largely Muslim countries as well, such as Indonesia (69%), Bangladesh (55%), and Malaysia (55%). In addition, solid majorities in France (62%) and Germany (57%) who say U.S. policies favor Israel too much.

Even in Israel, a slim 42% plurality says America is too supportive of their country, while 13% say the U.S. favors the Palestinians too much and 37% say U.S. policies are fair. About a third of Americans (34%) see U.S. policy in the region as fair, 27% see it biased toward Israel, and 8% biased toward the Palestinians. With few exceptions, only small minorities of respondents in the 37 countries where this question was asked see American policy as overly supportive of the Palestinians (it was not asked in sub-Saharan Africa).

Next: Chapter 6. Views of World Leaders and Institutions
← Prev Page
Page1Page2Page3Page4Page5You are reading page6Page7Page8Page9
Next Page →