If any single attitude unites people of different nations and varied personal circumstances, it is their very strong dissatisfaction with the way things are going in the world. Overwhelming majorities in nearly every country are unhappy with the state of the world. Yet the Global Attitudes survey also shows that people from different countries disagree about which specific threats pose the greatest danger to the world. 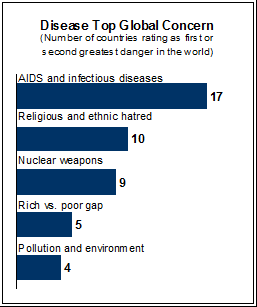 Of the 44 nations surveyed, 17 countries – most in Africa – say AIDS and other diseases pose the greatest threat to the world. Majorities or pluralities in ten other countries rate religious and ethnic hatred as a top global concern. And people in nine countries cite nuclear weapons as the main danger facing the world.

Survey respondents were asked to choose the greatest threat currently confronting the world from a list of five, including pollution and other environmental concerns and the growing gap between rich and poor. Outside of Africa, there is little agreement about which of these threats present the greatest risk, within regions or even among close allies.

The Americas: In the United States, the biggest worry about the world concerns the spread of nuclear weapons (59% say this is the greatest or second-greatest threat to the globe), followed by the danger of religious and ethnic hatred (52%). Canadians express a similar level of concern about religious and ethnic hatred (55%), but just one-third name the spread of nuclear weapons. Nearly twice many Canadians as Americans worry about pollution and the environment (44% vs. 23%)

Not only do the publics in the United States and Canada diverge in their opinion about the world’s greatest dangers, their views about individual threats often differ from those of people in the rest of the Americas. Mexicans, for instance, express much more concern about AIDS and other infectious diseases. Fully six-in-ten Mexican respondents (62%) name such health concerns as a top threat to the world, compared with 32% of Americans and 30% of Canadians.

However, Mexicans do share the U.S. concern about nuclear weapons, with 51% citing this as a major danger. So too do majorities of Venezuelans (57%), Brazilians (56%) and nearly half of respondents in Peru (49%).

But like Mexicans, people in these and other Latin American countries are much more concerned about AIDS and infectious disease. In Honduras, more than three-quarters (77%) say these illnesses are the greatest threat to the world. There also is a high degree of concern over health problems in Peru (59%), Venezuela (56%), Brazil (52%), Bolivia (49%), and Guatemala (48%).

By contrast, a solid majority of those surveyed in Argentina (58%) see the rich-poor gap as a greatest threat to the world. Argentines’ high level of concern about global income disparities is not matched by any other Western Hemisphere nation surveyed and Argentine concern is among the highest in the world. In the rest of the region, Brazilians and Bolivians display the greatest level of concern about the rich-poor gap (43% in Brazil, 37% in Bolivia).

Overall, Latin Americans are primarily concerned about three world dangers – nuclear weapons, infectious diseases, and the rich-poor gap. They are less concerned than their neighbors to the north — the United States and Canada – about the threat to the globe from religious and ethnic hatred.

Europe: Europeans generally agree that the greatest danger to the world is religious and ethnic conflict. In this respect, the U.S. and Canada have more in common with most of their traditional European allies than with most other countries.

Concern about ethnic strife is highest among the British (69%), Germans (61%), French (59%) and the Czechs (58%). For the most part, people in Western European countries are more concerned about the danger of religious and ethnic conflict than are Eastern Europeans. This division is seen even within Germany, where 63% of those in the former West Germany cite this danger, compared with 55% of those in the former East Germany.

Aside from religious and ethnic conflict, Europeans say that nuclear weapons and the rich-poor gap pose the greatest dangers to the world. The spread of nuclear weapons is viewed as the biggest threat in the Slovak Republic (50%) and Italy (48%), and one of the top two concerns in Poland (47%), Bulgaria (41%) and Britain (40%). The rich-poor gap is seen as the greatest world threat in Bulgaria (55%) and Poland (51%) and it is viewed as the second-biggest danger to the world in Germany (51%) and France (43%).

But Russians and Ukrainians take a different view of global dangers. In Russia, 45% of the public says the biggest danger to the world is disease – reflecting the high incidence of both AIDS and tuberculosis – followed by ethnic conflict or pollution (41% and 40% respectively). In Ukraine, more people cite pollution and environmental problems (54%) than other global dangers, which may be an indication of continued public concern about the 1986 Chernobyl nuclear disaster and the lingering effects of Soviet-era environmental neglect. Nearly as many Ukrainians (51%) view AIDS and other infectious diseases as a major threat.

Africa: Only in Africa is there is broad consensus about the greatest danger facing the world. Africans overwhelmingly agree that AIDS and other infectious diseases represent the most threatening global problem. Fully 90% of South Africans and nearly as many Kenyans (89%), Tanzanians (87%) and Ugandans (86%) share this concern, followed by 84% in Ghana. This judgment parallels most Africans’ sense that such health problems also pose the greatest threat to their individual nations. There is broad awareness of the prevalence of other deadly diseases besides AIDS, such as malaria, where the African death toll is nearly eight times the world average, and tuberculosis, where the incidence in Africa is twice the world average.

Beyond AIDS and infectious diseases, there is little consensus in Africa about the greatest dangers to the world. But the spread of nuclear weapons is mentioned by a significant number of Africans: Angola (51%), Uganda (46%), Senegal (45%), and the Ivory Coast and Mali (both 41%).

Asia: Worry about the global ecosystem is the dominant global concern in Asia, possibly because air pollution is emerging as a key issue across the region. Of the top six countries worldwide where pollution and the environment are named as the greatest threat to the world, four are in Asia: South Korea (73%), China (70%), Japan (55%) and the Philippines (49%).

The greatest threat, as far as 64% of Indonesians are concerned, is religious and ethnic hatred, perhaps reflecting recent outbreaks of civil strife in that island nation.

Middle East/Conflict Area: In Lebanon and Jordan, the greatest danger cited by those surveyed is religious and ethnic conflict (72% and 52% respectively). In Pakistan, which has long been in a nuclear standoff with India, 54% cite the spread of nuclear weapons. And in Turkey, 62% cite the rich-poor gap as a global danger.

In general, peoples’ specific worries about the most dangerous global problem do not seem to strongly influence their overall level of satisfaction with the world, with one exception. In countries where people name the rich-poor gap as the greatest danger facing the world, people also are more likely to be dissatisfied with the world right now. These countries include: Argentina, Bulgaria, India, Poland and Turkey.