Since the early days of the U.S. women’s rights movement, the term “feminist” has been a source of much debate. Even in 2020 – 100 years after the passage of the 19th Amendment, which granted women the right to vote – Americans differ over how well the term describes them and how they see the movement, according to a new Pew Research Center survey.

Pew Research Center conducted this study to understand Americans’ views on feminism around the 100th anniversary of women getting the right to vote. For this analysis, we surveyed 3,143 U.S. adults in March and April 2020, including an oversample of Black and Hispanic respondents. The adults surveyed are members of Ipsos Public Affairs’ KnowledgePanel, an online survey panel that is recruited through national, random sampling of residential addresses and landline and cellphone numbers. KnowledgePanel provides internet access for those who do not have it and, if needed, a device to access the internet when they join the panel. To ensure that the results of this survey reflect a balanced cross section of the nation, the data is weighted to match the U.S. adult population by gender, age, education, race and ethnicity and other categories. The survey was conducted in English and Spanish. 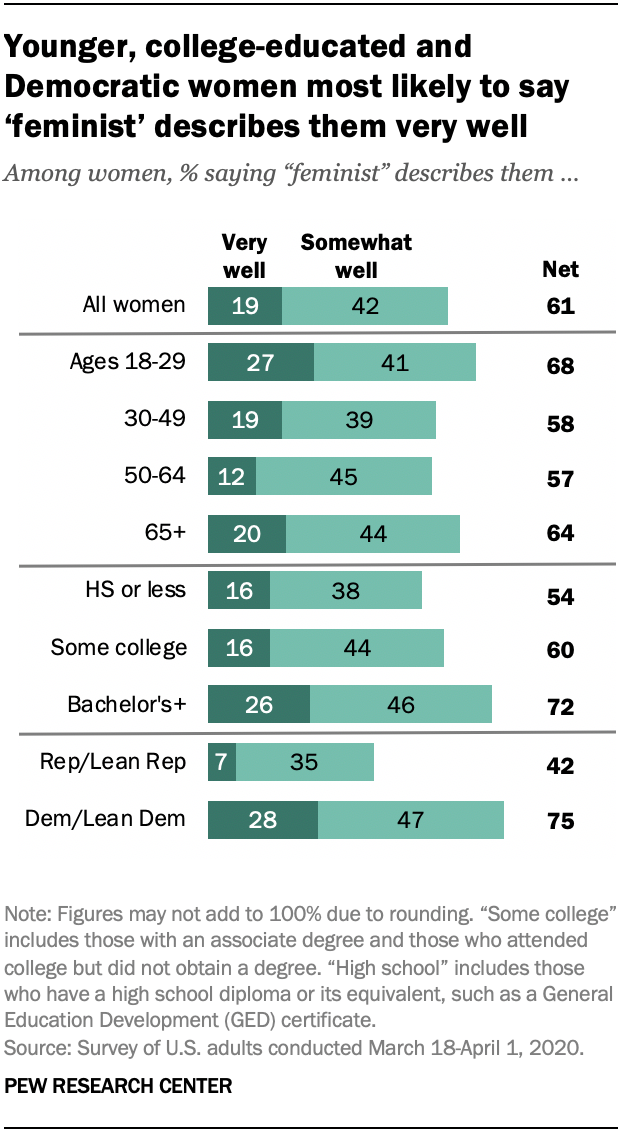 About six-in-ten U.S. women today say “feminist” describes them very (19%) or somewhat (42%) well. But the degree to which women consider themselves feminist differs substantially by age, education and political party, according to the survey.

About seven-in-ten women with at least a bachelor’s degree (72%) say the term feminist describes them very or somewhat well, compared with 56% of women with less education.

There are sharp partisan divides among women as well. Three-quarters of Democratic and Democratic-leaning women say the term feminist describes them very or somewhat well, compared with 42% of Republican and Republican-leaning women.

Most Americans say feminism is empowering, but many also see it as polarizing 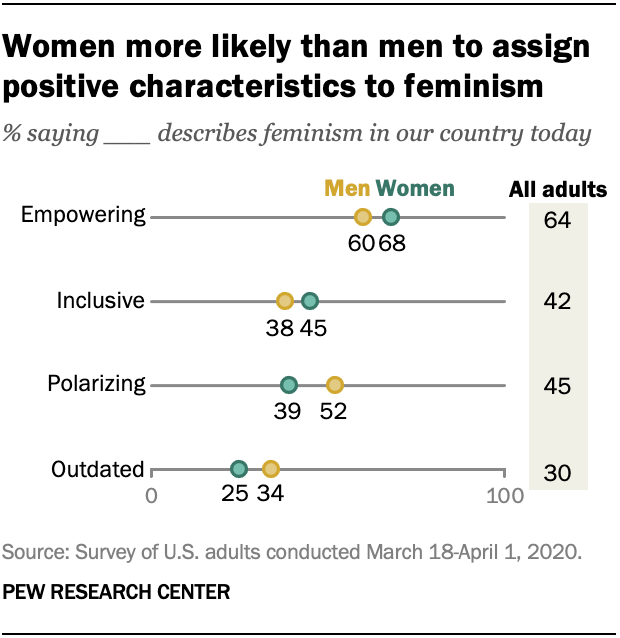 Overall, the public says the feminist movement has contributed to the advancement of women’s rights in the U.S.: 22% say it’s done a great deal and 48% say it’s done a fair amount. But the public has mixed views on what feminism looks like today. A majority of Americans (64%) say feminism is empowering and 42% see it as inclusive. At the same time, 45% say it is polarizing and 30% say it’s outdated.

Notably, many of those who identify as feminist are critical of the feminist movement. For example, 43% of adults who say feminism describes them very or somewhat well also say feminism is polarizing, and 45% would not describe it as inclusive.

Among women, there are some key differences across demographic groups. Women younger than 50 are more likely than their older counterparts to say feminism is empowering (73% vs. 63%). Women younger than 30 stand out for being the most likely to say feminism is inclusive (56% say it is) and the least likely to say it’s outdated (only 17% say it is).

Women with a college degree have somewhat different views on feminism than women with less education. Those with a bachelor’s degree or more education are more likely to say feminism is empowering (76% vs. 64% of those with some college education or less) and inclusive (54% vs. 41%), but they’re also more likely to see it as polarizing (50% vs. 34%). 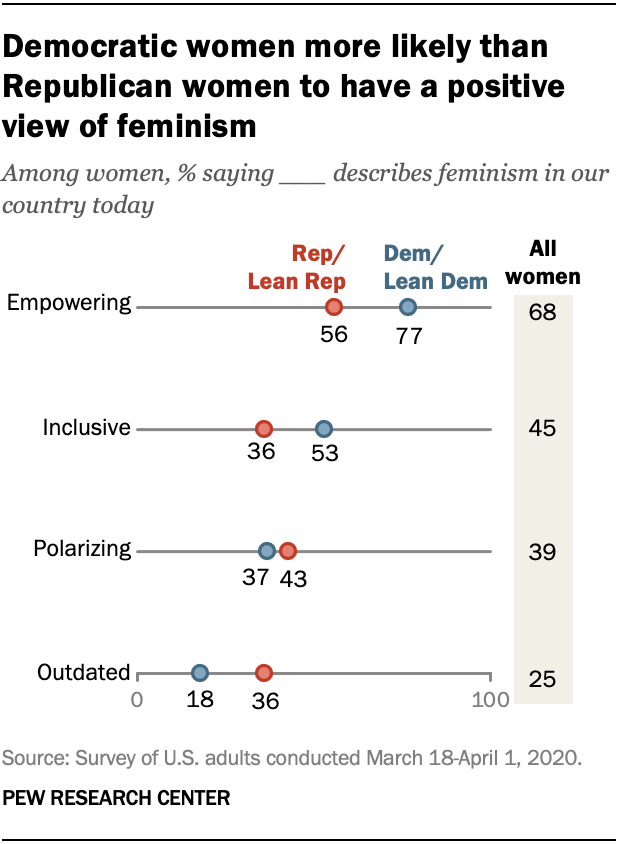 There are racial and ethnic differences, too, in how people view feminism. White adults are more likely than Black and Hispanic adults to associate feminism with negative characteristics. Roughly half of white adults (49%) say feminism is polarizing, compared with 34% of Black and 36% of Hispanic adults. Similarly, while about a third (32%) of whites say feminism is outdated, roughly one-in-four Black (24%) and Hispanic (26%) adults say the same. When accounting for both race and gender, similar patterns remain.

Most Americans support gender equality, even if they don’t identify as feminists
Key takeaways on Americans’ views on gender equality a century after U.S. women gained the right to vote
Activism on gender equality differs widely by education among Democratic women
Key facts about women’s suffrage around the world, a century after U.S. ratified 19th Amendment
20 striking findings from 2020
Quiz: Are you a Core Conservative? A Solid Liberal? Or somewhere in between?
A rising share of working parents in the U.S. say it’s been difficult to handle child care during the pandemic
Views on Race in America 2019
Biden Begins Presidency With Positive Ratings; Trump Departs With Lowest-Ever Job Mark
Defining generations: Where Millennials end and Generation Z begins