Amid scrutiny of the WHO, here are key facts about the organization and how Americans see it.

Over the past few months, Pew Research Center has tracked attitudes about the coronavirus response. This analysis is based on data from multiple sources.

Data on attitudes about the WHO is based on a survey of 10,957 U.S. adults from April 29 to May 5, 2020. Everyone who took part is a member of Pew Research Center’s American Trends Panel (ATP), an online survey panel that is recruited through national, random sampling of residential addresses. This way nearly all U.S. adults have a chance of selection. The survey is weighted to be representative of the U.S. adult population by gender, race, ethnicity, partisan affiliation, education and other categories. Read more about the ATP’s methodology. 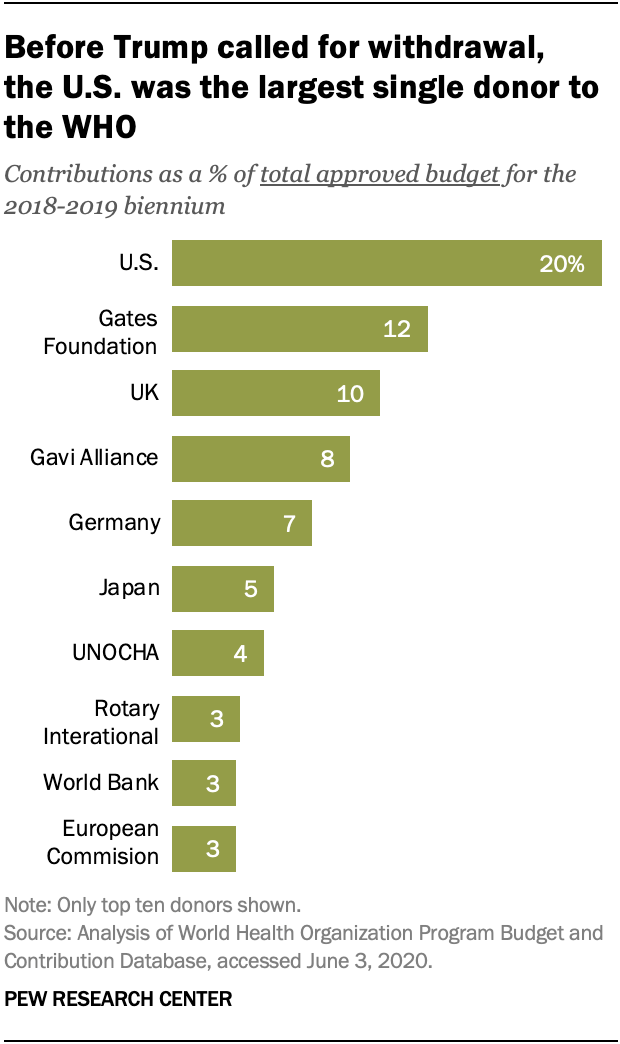 2The United States was the largest contributor to the WHO in the 2018-2019 biennium, giving just over $893 million, or about 20% of its approved budget that cycle. The second largest donor was the Bill and Melinda Gates Foundation, which contributed roughly 12%. Other top donors include Gavi, the Vaccine Alliance; the UN Office for the Coordination of Humanitarian Affairs (UNOCHA); Rotary International; the World Bank; the European Commission; and other WHO member states including the UK, Germany and Japan.

It is not clear whether Trump has unilateral authority to cut U.S. funding to the organization. Since 2010, at least 10 different federal agencies have sent money to the WHO. Prior to Trump’s decision, the U.S. was expected to make contributions equal to roughly 11% of the WHO’s 2020-2021 budget. (More information on U.S. funding of international organizations is available from the State Department.) 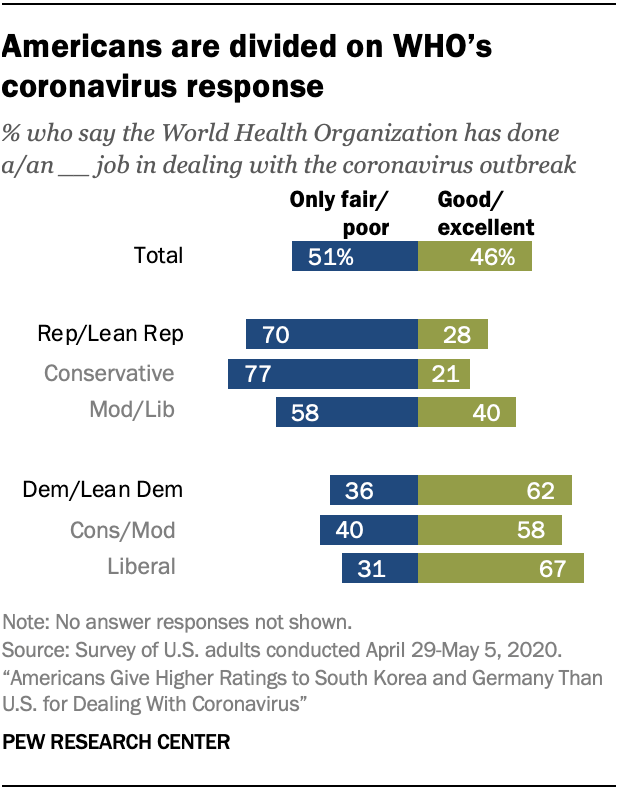 3Just 46% of Americans give the WHO positive marks on its coronavirus response, though views of how well the organization has dealt with the outbreak are sharply divided along partisan lines. Whereas 62% of Democrats and Democratic-leaning independents say the organization has done at least a good job in handling the pandemic, only 28% of Republicans and GOP leaners say the same.

The public rates the WHO’s pandemic response more negatively than that of national health authorities. When last polled in late April and early May, 72% of U.S. adults said public health officials such as those at the Centers for Disease Control and Prevention were doing at least a good job, with a much smaller partisan gap in opinion (only 7 percentage points). 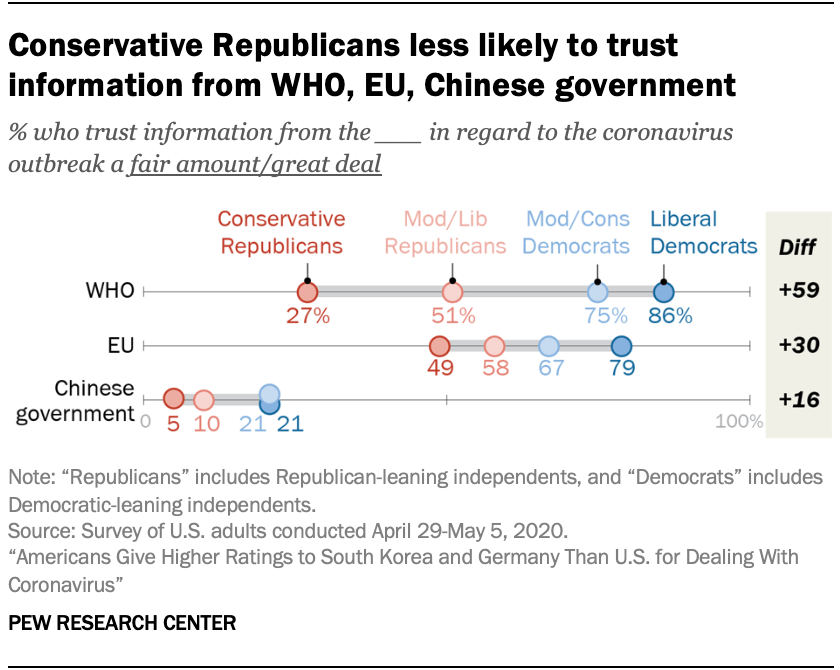 4Overall, 59% of Americans trust information from the WHO regarding the coronavirus outbreak. Trust is highest among younger adults and those with more education, though differences by education and age are relatively small compared with those by partisan identification and ideology. For example, 86% of liberal Democrats and Democratic-leaning independents say they trust information from the WHO at least a fair amount, compared with 27% of conservative Republicans and GOP leaners.

Partisans are somewhat less divided when it comes to trusting information about the coronavirus outbreak from the European Union, which is generally trusted, and the Chinese government, which is broadly distrusted.

In his criticisms of the WHO, Trump has argued that the organization has been too trusting of coronavirus-related information from the Chinese government.