As the coronavirus pandemic continues apace, people in the United States and Germany express different views about international relations and globalization, according to surveys conducted in both nations in April.

Compared with previous years, Germans are increasingly negative about their relationship with the U.S., even as both Americans and Germans expect international relations to change after the pandemic. Meanwhile, Germans are more comfortable than Americans with globalization and its effects.

The surveys are the latest in a series of polls conducted under a partnership between Pew Research Center in the U.S. and Körber-Stiftung in Germany. Below are five takeaways from the new surveys.

In 2017, Pew Research Center and Körber-Stiftung began collaborating on joint public opinion surveys to gauge the state of relations between the United States and Germany. The questions were developed together, and each organization fielded a survey within its own country starting that year. Some of the questions have been repeated annually to allow both organizations to track attitudes over time. Topics include relations with other countries, defense spending and military deployments, and general foreign policy attitudes. This year, questions about the coronavirus pandemic were also asked.

The results have been published in both countries, and the previous reports from Pew Research Center can be found here for 2019, 2018 and 2017.

The Körber-Stiftung findings are contained within their larger “Berlin Pulse” report and can be found here for 2019/2020 and 2018.

Here are the questions used for this report, along with the responses, and its U.S. survey methodology. 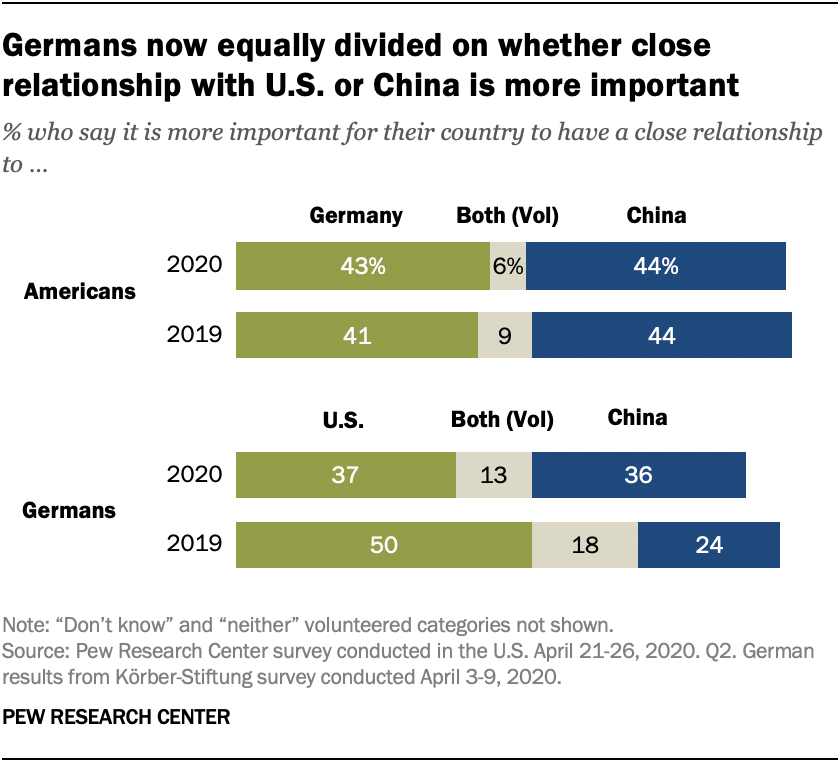 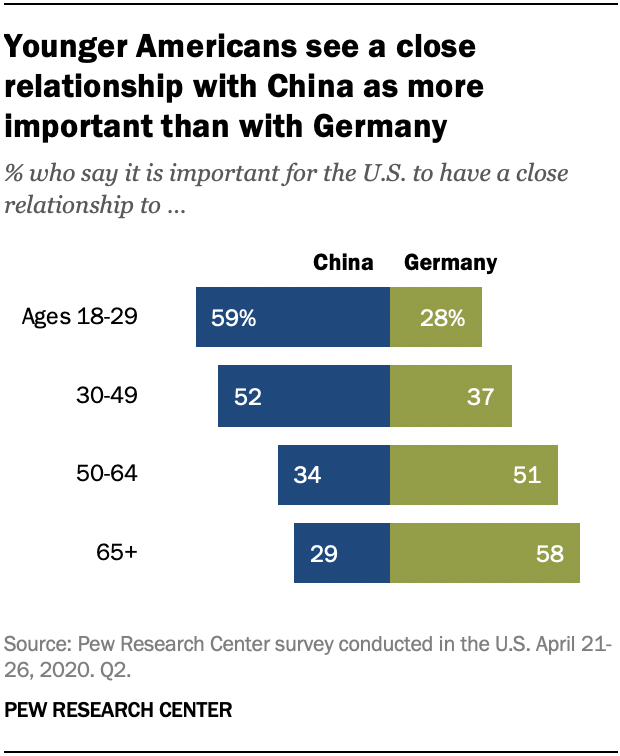 There has been virtually no change among Americans. Just as in 2019, a little over four-in-ten Americans say it is more important to have a close relationship with Germany (43%), while nearly the same share (44%) prioritize relations with China. 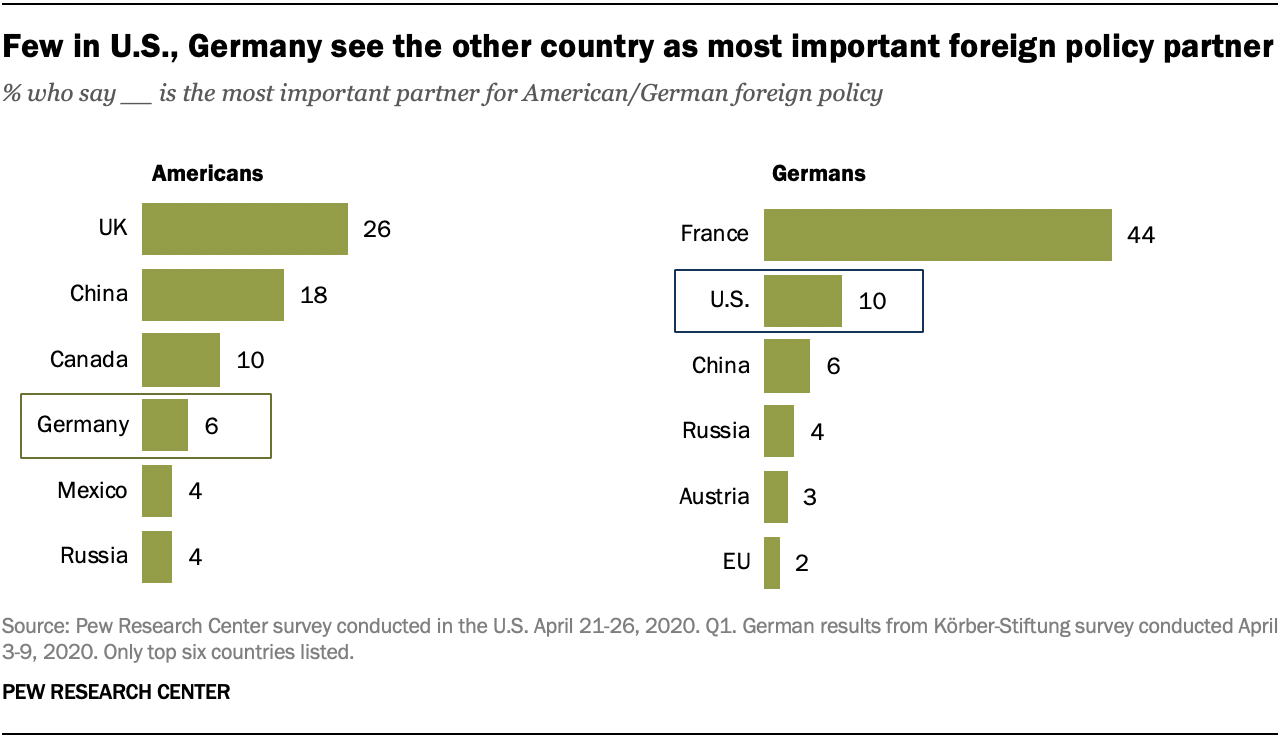 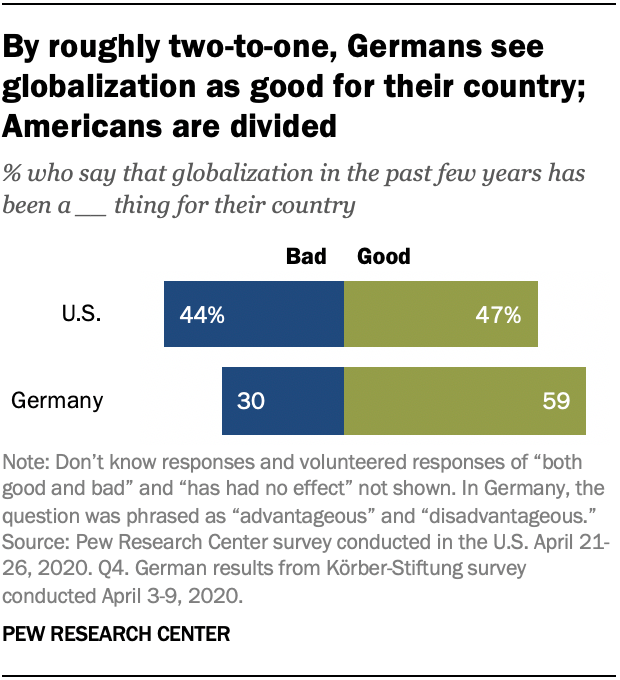 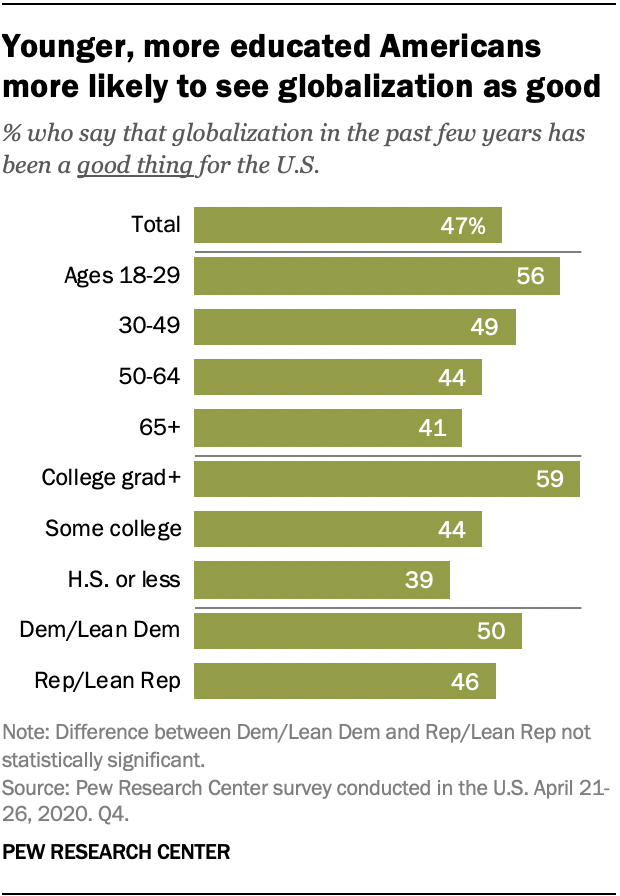 In the U.S., views of globalization differ significantly by age and education. Americans ages 18 to 29 are 15 percentage points more likely than those 65 and older to say globalization has been a good thing for their country (56% vs. 41%). And Americans with a four-year college degree or more education are 20 points more likely than those with a high school education or less to say this (59% vs. 39%). 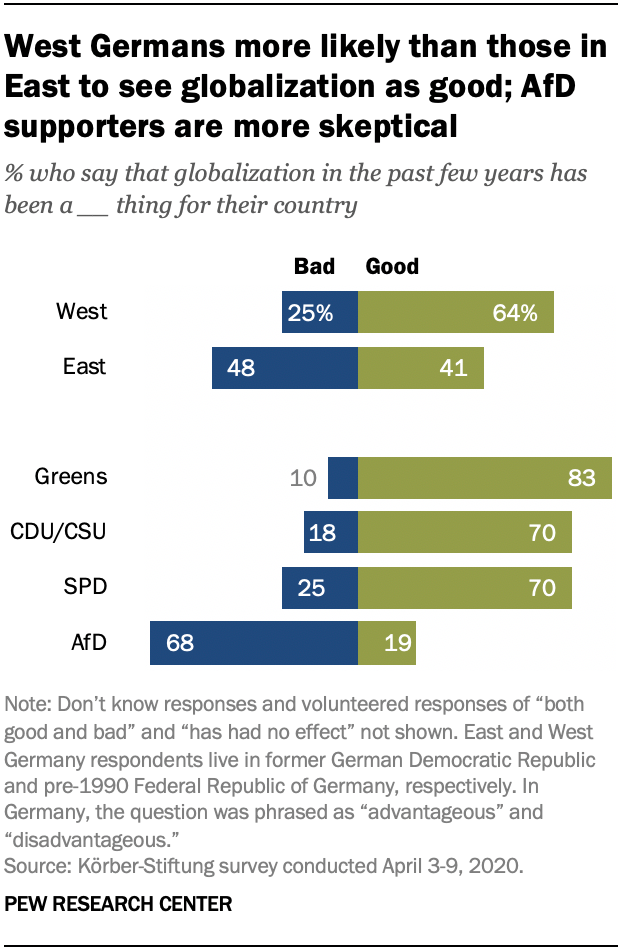 On a separate question about globalization’s effects on the personal lives of Americans and Germans, pluralities in each country say that this benefits them on a personal level About half of Germans (52%) say globalization is good for them personally, and 49% of Americans agree. 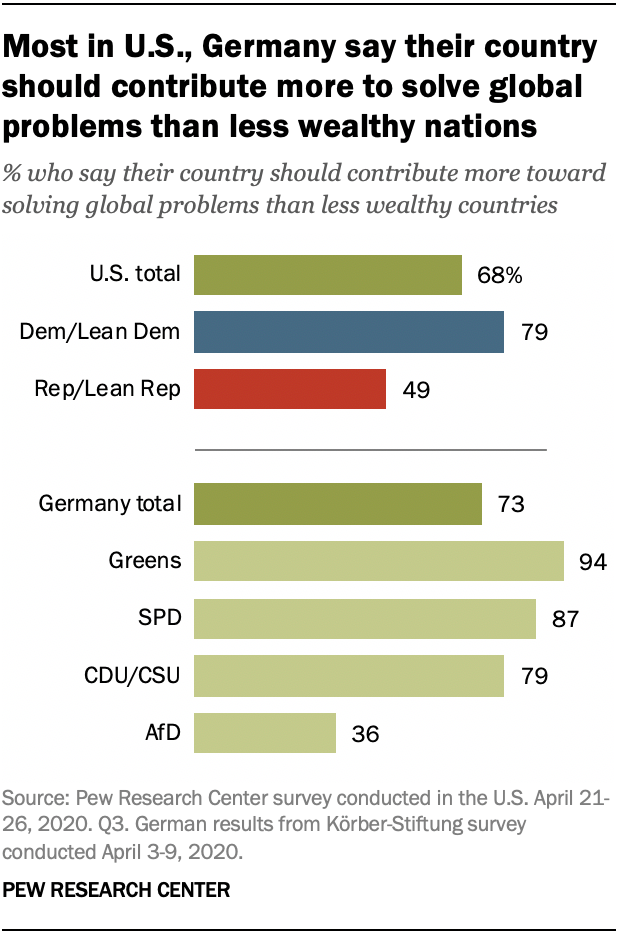 4Americans and Germans overwhelmingly agree that their country should do more than less wealthy countries to help solve global problems. Two-thirds or more of both Americans (68%) and Germans (73%) say their country should do more to help solve global problems than less wealthy countries. Only about a quarter of Germans (24%) and three-in-ten Americans disagree with this sentiment.

In the U.S., there are sizable partisan differences: 79% of Democrats say the U.S. should contribute more to solving global problems than less wealthy nations, while 49% of Republicans agree. 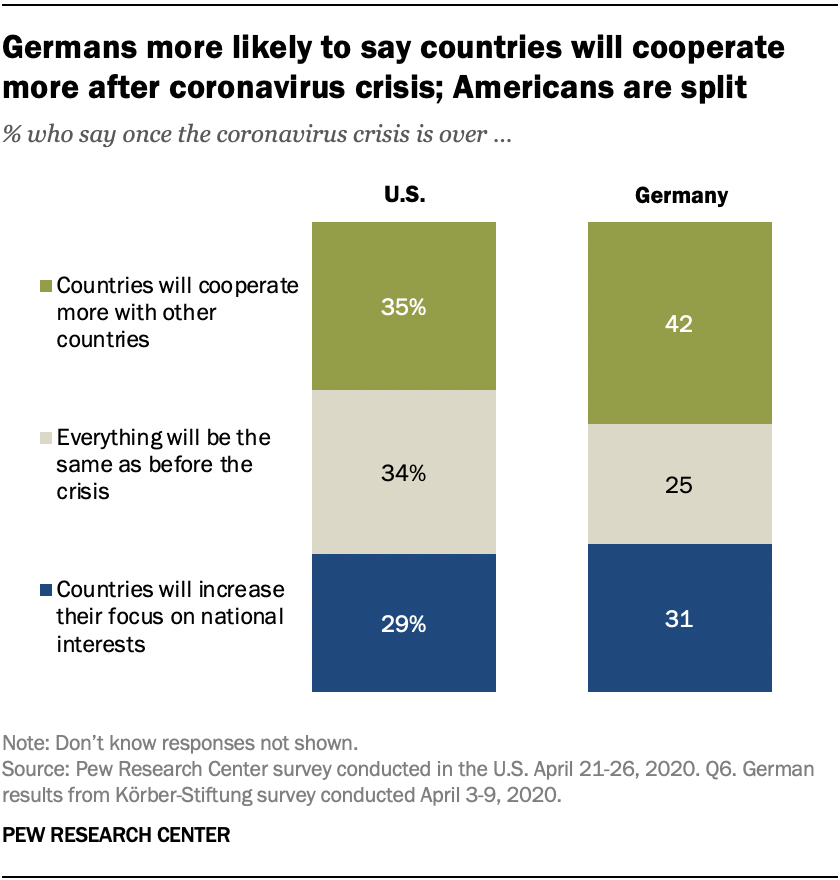 5Germans and Americans agree foreign relations will change once the coronavirus crisis is over, but they differ somewhat over how things will change. Around four-in-ten Germans (42%) say countries will cooperate more with each other after the crisis, while a smaller share (31%) say countries will increase their focus on national interests. Americans are more divided on this question: 35% say countries will cooperate more, while 29% say nations will focus more on their own interests. In both countries, only around a third or fewer say everything will be the same as before the coronavirus crisis.

Note: Here are the questions used for this report, along with the responses, its U.S. survey methodology, and the full dataset.