Here are some key findings about race, ethnicity and the COVID-19 outbreak, drawn from surveys conducted during the first months of the crisis.

This post is based on findings from two Pew Research Center surveys. The Center surveyed 11,537 U.S. adults from March 19 to 24, 2020, about economic, health and other worries as the coronavirus began to spread in the U.S. The Center then surveyed 4,917 U.S. adults from April 7 to 12, 2020, about economic issues and health concerns during the outbreak.

Everyone who took part in both surveys is a member of Pew Research Center’s American Trends Panel (ATP), an online survey panel that is recruited through national, random sampling of residential addresses. This way nearly all U.S. adults have a chance of selection. The surveys are weighted to be representative of the U.S. adult population by gender, race, ethnicity, partisan affiliation, education and other categories. Read more about the ATP’s methodology. 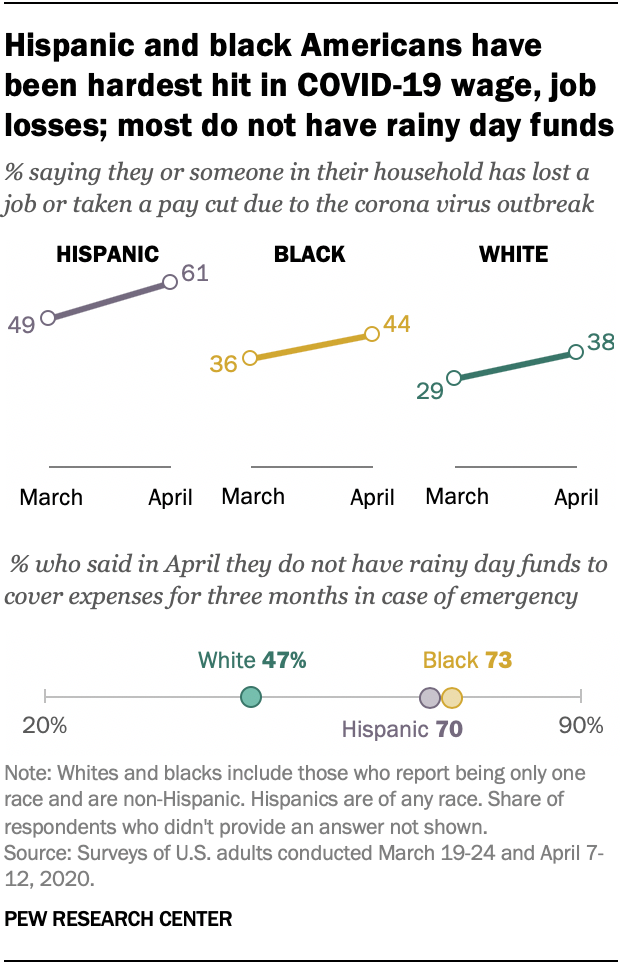 2Most black and Hispanic Americans do not have financial reserves to cover expenses in case of an emergency. In the April survey, nearly three-quarters of black (73%) and Hispanic adults (70%) said they did not have emergency funds to cover three months of expenses; around half of white adults (47%) said the same. The vast majority of black and Hispanic adults without financial reserves also said they would not be able to cover their expenses for three months by borrowing money, using savings or selling assets.

In the same survey, 57% of black adults and 51% of Hispanic adults said the federal aid package passed in response to COVID-19 would help their household at least a fair amount. Some 43% of white adults said the same. 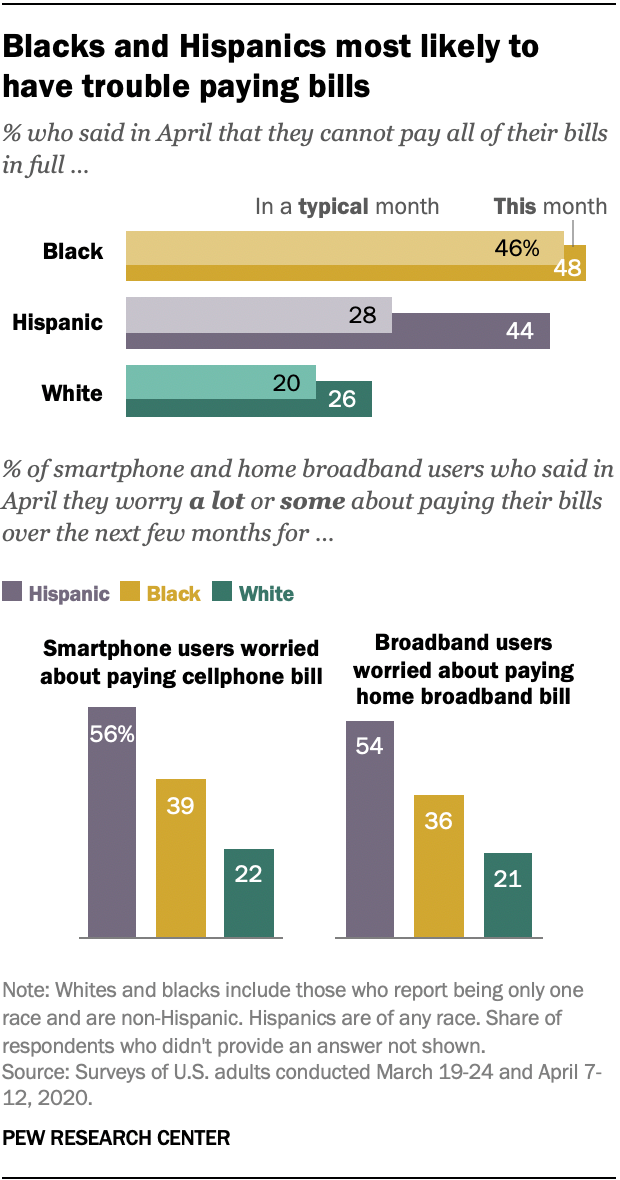 3The COVID-19 economic downturn has made it harder for some Americans to pay their monthly bills. Black (48%) and Hispanic adults (44%) were more likely than white adults (26%) to say they “cannot pay some bills or can only make partial payments on some of them this month,” according to the April survey. For Hispanics, this was a considerably greater share than the 28% who said they have trouble paying their bills in a typical month.

These concerns extended to paying cellphone and home broadband bills. Hispanic and black adults who use these technologies were more likely than white users to say they worry a lot or some about paying bills for these services.

4There are sharp racial and ethnic differences in personal experiences with COVID-19 and in concerns about spreading or catching the virus. In the April survey, about one-in-four black adults (27%) said they personally knew someone who had been hospitalized or died as a result of having COVID-19, roughly double the shares who said this among Hispanic or white adults (13% each). At the same time, Hispanic Americans expressed greater concern than other groups about contracting COVID-19 and requiring hospitalization. Hispanics were also more likely than blacks or whites to be worried that they might unknowingly spread COVID-19 to others; about two-thirds of all adults said they were at least somewhat concerned about doing this.

5Hispanic and black Americans are more likely than white adults to say cellphone tracking is acceptable in efforts to fight the virus. Two-thirds (66%) of Hispanic adults and 56% of black adults said in April that it is at least somewhat acceptable for the government to use people’s cellphones to track the location of those who have tested positive for the coronavirus; about half of white Americans (47%) said the same. Hispanic (55%) and black adults (45%) were also more likely than white adults (31%) to say it is very or somewhat acceptable for the government to track the location of people’s cellphones to ensure people are complying with experts’ advice on limiting social contact during the outbreak. The findings come as some governments have considered employing technology to help with monitoring and tracking the spread of the virus.