Most Americans feel worn out by the amount of news there is these days – a feeling that has persisted for several years now. 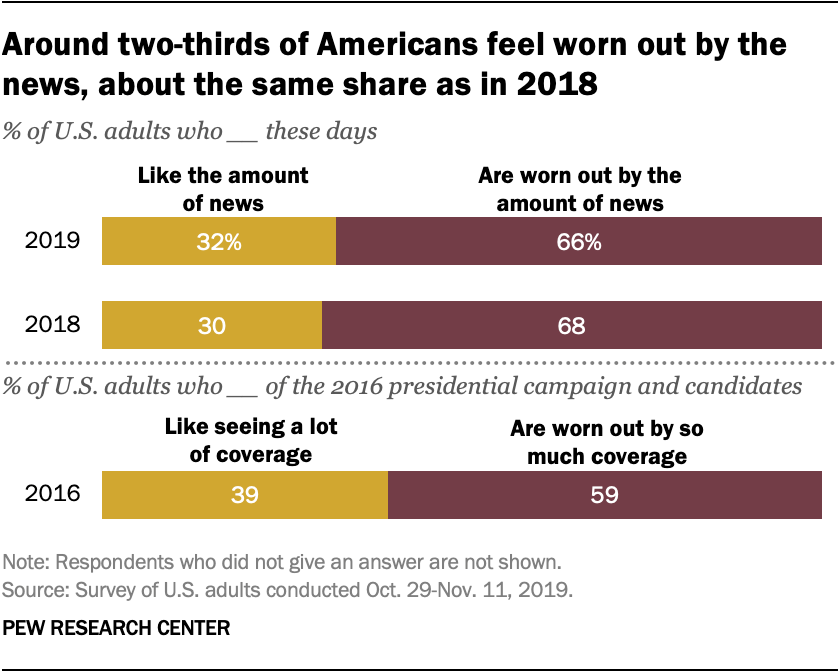 About two-thirds of Americans (66%) feel worn out by the amount of news there is, while far fewer (32%) say they like the amount of news they are getting, according to a Pew Research Center survey of more than 12,000 U.S. adults conducted in October and November of last year – the first survey in the Center’s nearly yearlong Election News Pathways project. This feeling of news fatigue hasn’t escaped journalists either, some of whom have voiced their exhaustion with the news cycle and the seemingly endless stream of information.

Americans’ exhaustion with the news hasn’t changed since early 2018 – the last time the Center asked this question – when 68% felt worn out. And in a similar question asked several months before the 2016 presidential election between Donald Trump and Hillary Clinton, nearly six-in-ten (59%) felt worn out by the amount of coverage of the campaign and candidates.

To examine Americans’ news fatigue, we used data from a broad survey of 12,043 U.S. adults conducted in October and November 2019 – the first survey in the Center’s nearly yearlong Election News Pathways project.

Here are the questions asked in this survey, along with responses, and the methodology. Visit our interactive data tool to access the data on news fatigue and other issues related to news and the election. 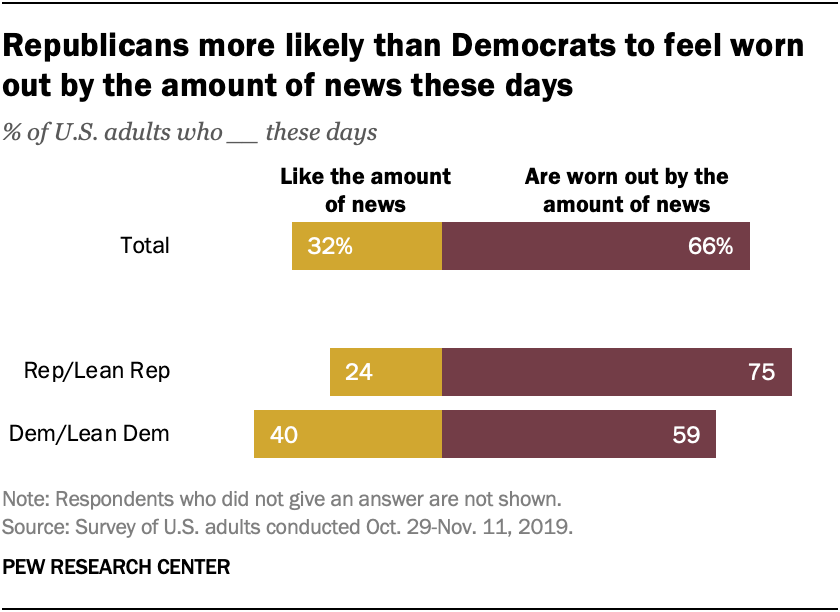 Large shares of people in both political parties have news fatigue, but the feeling is more common among Republicans and Republican-leaning independents. Three-quarters of Republicans say they are worn out by the amount of news there is, compared with 59% of Democrats and Democratic leaners. This 16 percentage point gap between partisans was similar in 2018. (Find survey data on news fatigue by party, demographics and media traits in our Election News Pathways interactive data tool.) 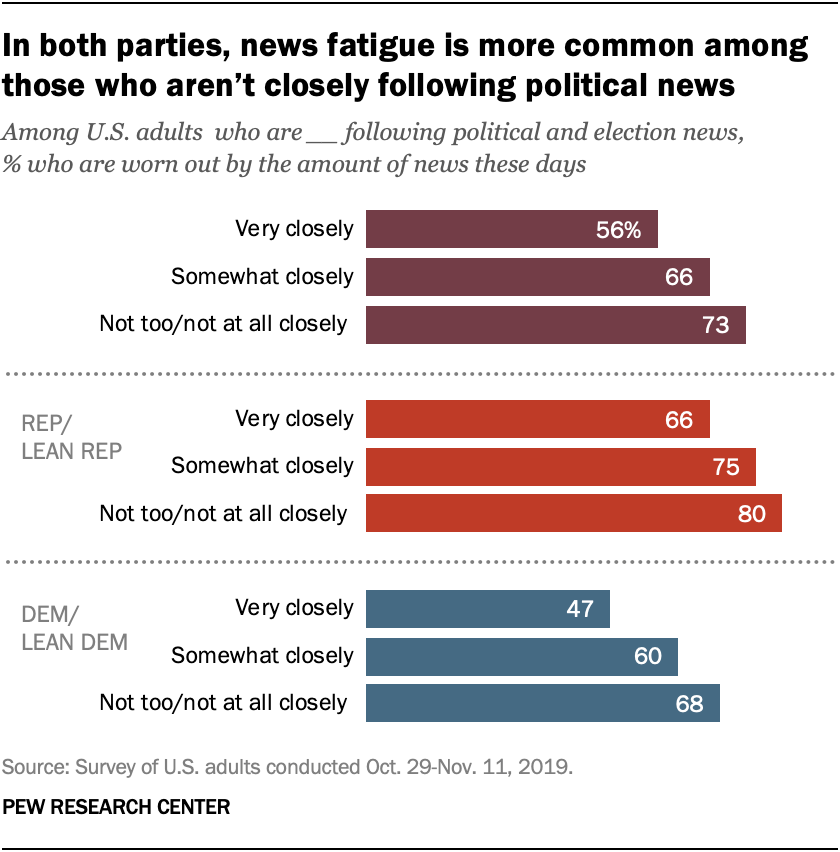 News fatigue is more widespread among the least engaged political news consumers. Nearly three-quarters of those who follow political and election news “not too” or “not at all closely” feel exhausted by the news (73%), higher than the share among those who follow political news “somewhat” (66%) or “very” closely (56%). A similar pattern emerges with engagement with politics more generally: Those who discuss politics a few times a month or less are 10 percentage points more likely to feel news fatigue than those who do so nearly every day (69% vs. 59%). Those who talk about politics a few times a week fall in between at 65%. (It should be noted that the question asked about fatigue about news generally, not specifically about political or election-related news.)

Democrats who are more engaged with news about politics and the election are the least likely to feel worn out. In fact, while majorities in all other groups feel news fatigue, Democrats who very closely follow political news are about evenly split – roughly half feel worn out (47%), while 52% like the amount of news there is these days. By comparison, nearly two-thirds of Republicans who very closely follow political news (66%) feel worn out. 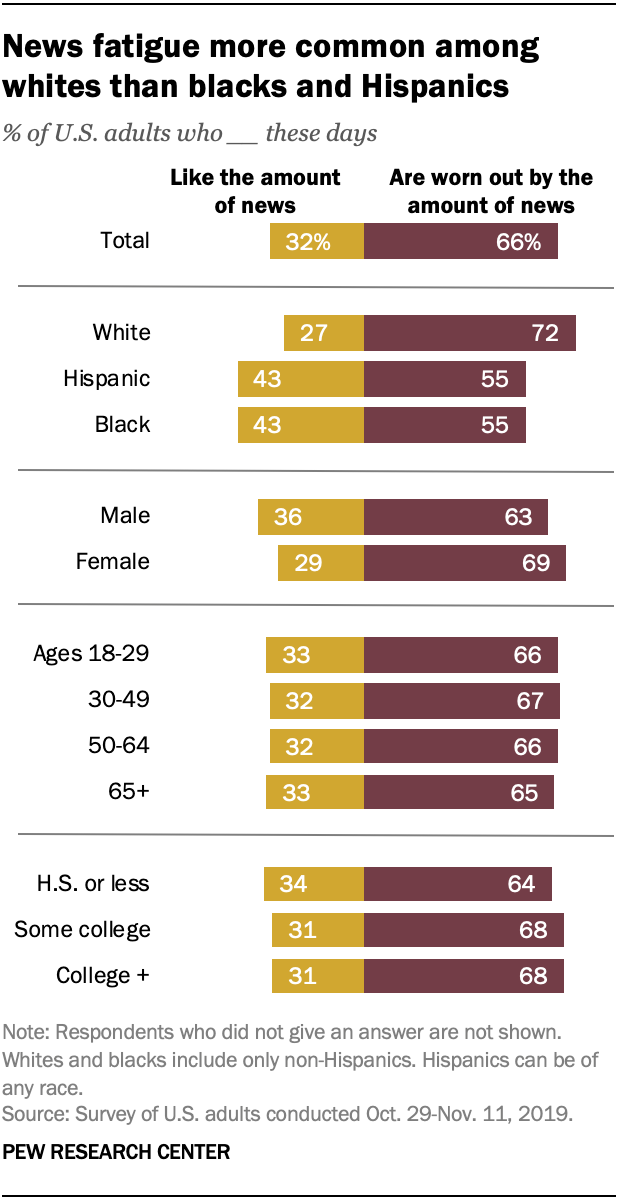 In addition to differences by party and level of news engagement, one demographic divide stands out: race and ethnicity. Roughly three-quarters of white Americans (72%) feel news fatigue, 17 percentage points higher than both black (55%) and Hispanic Americans (55%) – and again similar to the divide measured in 2018. Women are also slightly more likely than men to feel worn out by the amount of news there is (69% vs. 63%). But this sense of exhaustion with the news is about on par across age groups and levels of education.

Interested in exploring the data further, seeing more data like this or conducting your own analysis? Visit our interactive data tool to access the data on news fatigue and other issues related to news and the election.

Note: This is an update to a post originally published on June 5, 2018.