As Democratic presidential candidates campaign to win their party’s nomination, there is still some uncertainty about how voters from various religious groups will cast their ballots. When November rolls around, however, early indications are that preferences by religion will be familiar – and closely linked to each group’s party leanings.

On the whole, among registered voters who identify with or lean toward the Democratic Party, Protestants and Catholics are most likely to name Joe Biden as their first choice, according to a national survey Pew Research Center conducted in January. 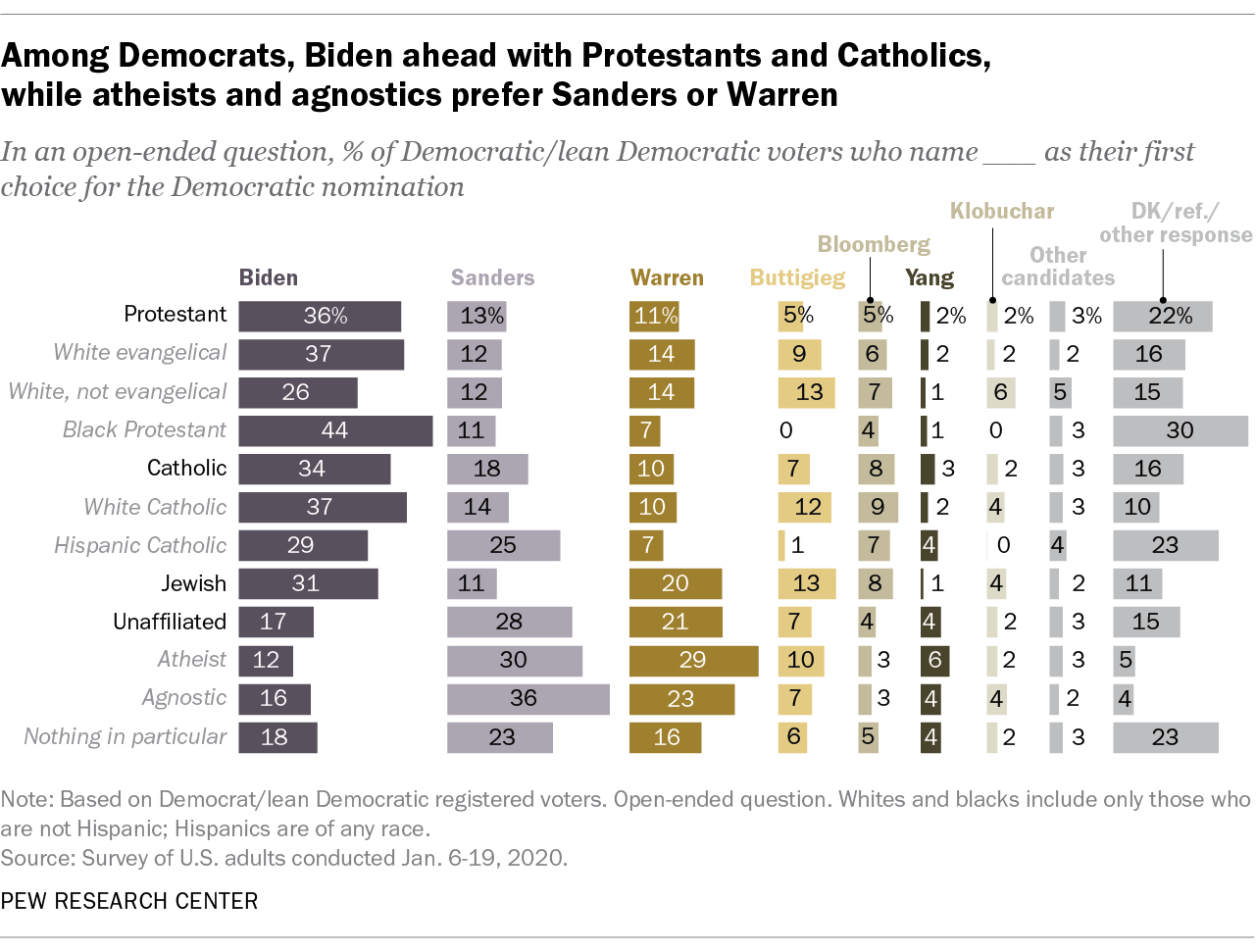 For this analysis, we surveyed 12,638 U.S. adults, including 10,491 registered voters (5,861 of whom are Democratic and Democratic leaners) in January 2020. Everyone who took part is a member of Pew Research Center’s American Trends Panel (ATP), an online survey panel that is recruited through national, random sampling of residential addresses. This way nearly all U.S. adults have a chance of selection. The survey is weighted to be representative of the U.S. adult population by gender, race, ethnicity, partisan affiliation, education and other categories. Some of the material also draws from prior surveys that members completed. Read more about Pew Research Center’s ATP here. Here are the questions used for the survey cited in this report, along with responses, its methodology and a table with sample sizes and margins of error for groups analyzed in this post.

The survey was conducted as the campaign season began in earnest with the Iowa caucuses to be held on Feb. 3 and the first-in-the-nation New Hampshire primary on Feb. 11.

No candidate has majority support from any of the large religious groups, and many voters still say they are undecided or decline to name a favorite. Among black Protestant Democratic voters, for example, 44% name Biden as their first choice – four times the share of any other candidate – but 30% remain undecided or give other responses indicating uncertainty in their vote choice.

The Democratic primary has two candidates who, if they win the general election, would make history by becoming the country’s first Jewish president – Sanders and Michael Bloomberg. But just one-in-five Jewish voters say they currently prefer Sanders (11%) or Bloomberg (8%) as the Democratic nominee, compared with 31% who name Biden, 20% who prefer Warren, 13% who name Pete Buttigieg, and 11% who are undecided, refuse to answer the question, or give some other response. 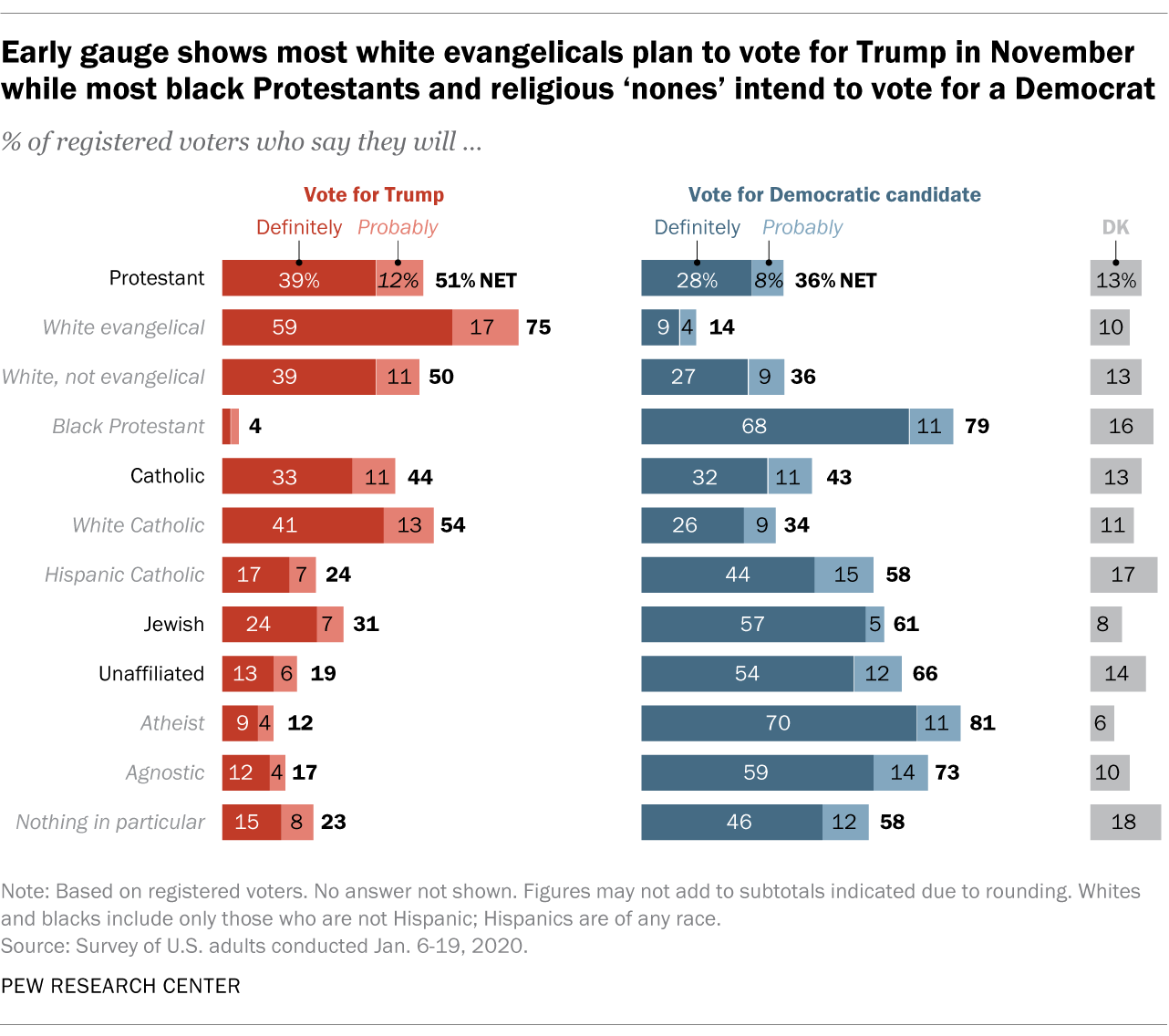 Taking a very early look ahead to November’s general election, the survey also asked registered voters across the political spectrum to predict their vote – whether it would be for Donald Trump or the yet-to-be-determined Democratic nominee. Similar to other recent elections, most white evangelical Protestants say they will definitely (59%) or probably (17%) vote for Trump, and just 14% say they will probably or definitely vote for the Democrat. White Protestant voters who do not identify as born again or evangelical also are more likely than not to say they will vote for Trump in November.

Most black Protestant (79%) and religiously unaffiliated voters (66%), meanwhile, intend to vote Democratic, including majorities in each group who say they will definitely vote for the Democratic candidate.

Catholics are more evenly divided between those who say they will definitely vote for Trump (33%) and those who definitely plan to back the Democratic nominee (32%). About one-in-ten Catholic voters (11%) will probably vote for Trump, while an identical share (11%) will probably vote for the Democrat. Among Catholics, as among Protestants, racial and ethnic factors play a role: White Catholic voters lean more toward Trump than the Democratic nominee, while Hispanic Catholics are much more likely to say they will vote Democratic.

These preferences largely reflect the political party affiliations of members of each religious group. For example, most white evangelical Protestants identify as Republicans, and Republicans overwhelmingly support Trump. Among white evangelical voters who identify with or lean toward the GOP, 68% say they will definitely vote for Trump in November and another 19% say they will probably do so. 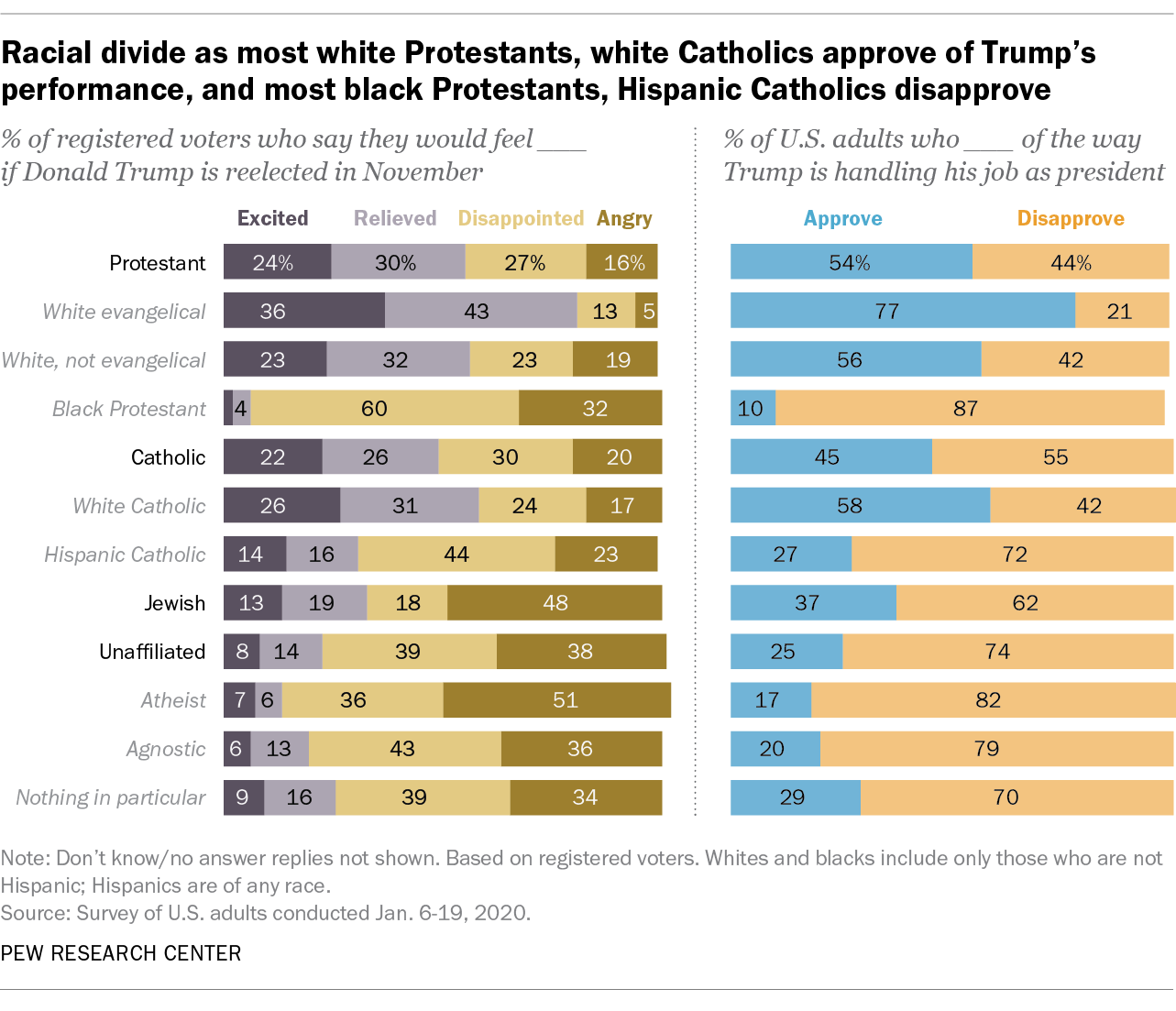 There are similar fault lines on two related questions: How voters expect to feel if Trump is reelected, and whether Americans overall approve of the job he is doing as president. Most white evangelical Protestant voters say they would be relieved (43%) or excited (36%) if Trump wins reelection, while most black Protestants say they would be disappointed (60%) or angry (32%). Religiously unaffiliated voters would also feel negatively about another Trump victory, while Catholics are roughly evenly split between those who say they would have positive and negative emotions.

We asked all respondents, not just registered voters, how they think Trump is handling his job as president. Three-quarters of white evangelical Protestants (77%) say they approve of Trump’s performance, including a clear majority (64%) who approve “very strongly.” Most white Protestants who are not evangelical (56%) also approve of the job Trump is doing, as do most white Catholics (58%). Black Protestants, religiously unaffiliated Americans, Hispanic Catholics and U.S. Jews all mostly disapprove of Trump.

Note: Here are the questions used for the survey cited in this report, along with responses, its methodology and a table with sample sizes and margins of error for groups analyzed in this post.

A snapshot of the top 2020 Democratic presidential candidates’ supporters
Most Americans don’t see Democratic candidates as very religious
Democrats on Twitter more liberal, less focused on compromise than those not on the platform
What the 2020 electorate looks like by party, race and ethnicity, age, education and religion
Democrats see Biden and Sanders as very different ideologically